Someone Has Died Board Game Review 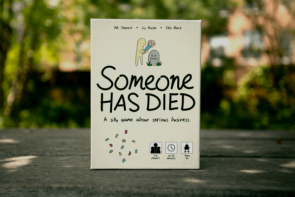 In this world nothing can be said to be certain except death, taxes and story telling games.

With the undeniable success of Cards Against Humanity, there has be been a proliferation of storytelling titles in the last few years. They can be as basic as the Cards Against Humanity  formula of “Madlibs for Adults” or specialty themed like X-files: Everything is Connected. In order to truly stand out, a game has to do something (or somethings) special.

As with most storytelling games, one player will need to be the Judge/Dungeon Master/Whatever. In the case of Someone Has Died, that falls to the Estate Keeper. They set the stage by explaining who it is that has died, (with the assistance of a Identity card, if they choose), how the person has died, and what is “up for grabs” in the will. Setting the stage is key to the flow of the game, so we always started with the most experienced player as Estate Keeper. After that, we “rewarded” the winning player with the title for the next game, which worked out really well.

The round-based set-up really helps to break Someone Has Died from the storytelling pack. You start with Opening Statements where each player introduces themselves and must include the information on their Identity card, Relationship Card, and two Backstory cards that they are dealt at the beginning of the game. The second round is the Interrogation Round where the Estate Keeper asks one question of each player and they must answer AND incorporate a newly added backstory card into their answer. The Third round is called the Recess Round where every player is allowed to ask one question of any other player at the table. Not only does this give the Estate Keeper a little reprieve from keeping the game flowing but you can be sure the other players have that one little string they want to pull on another players story to see if they can cause it all to unravel. The last round is Final Statements, where each player makes his desperate plea for the treasures that are at stake...while incorporating in a final Backstory Card.

Someone Has Died also adds in the wild card of Objections. These can be handed out by the Estate Keeper as a reward for a particularly witty response or story. When someone plays them on another player, the instantly become truth and must be incorporated into that players story. It's like going all Perry Mason on another player by tossing a spanner in the works.

Sometimes the cards just synergize into a perfect plot. Like when I was a Talking Venus Flytrap who was in a barber shop quartet with the deceased...and I was hungry and looking at the person to my left as a quick snack. I'm a mean, green mother from outer space and I...am...hungry. I really thought I was putting forth a very convincing argument towards getting the deceased 's Therapist Couch...until an objection that read “Your mouth is full of peanut butter!” turned it into a revelation the likes of “Soylent Green is People!”

The bane of all story telling games is the curse of ”I've seen those cards before.” Someone Has Died doesn't rely on shock for humor like CAH does. So, the Antique Collector whose writing a biography about the deceased while carrying around a lock of her hair can be just as funny as an Antique Collector who was arrested by a Mall Cop for Segway-related crimes. The mix and match aspect of the rounds and cards means you never really get the feeling that you have seen all of this before.

Someone Has Died supports 3 to 6 players and wraps up in about a half hour or forty-five minutes but almost always demands a immediate replay. It's humor is safe for all ages (assuming you are following the 13 and up recommendation on the box), but gives you enough leeway to take it in whatever direction you want.

Some games pay off in the feeling of a strategy coming together or the thrill of the improbable just-can't-lose roll of the dice. Someone Has Died pays off in belly laughs and smiles, which is a fantastic currency to deal in.

May 25, 2019
Rating
4.0
Someone Has Died
Some games pay off in the feeling of a strategy coming together or the thrill of the improbable just-can't-lose roll of the dice. Someone has died pays off in belly laughs and smiles, which is a fantastic currency to deal in.
W
WadeMonnig Top 10 Reviewer 95 reviews

ubarose wrote: This has been getting some buzz.

It's a great story telling game, especially as an intro to the genre. Constantly adding new cards means the well never runs dry for ideas and, at the same time, adds a challenge of working a new wrinkle in.
Read More...