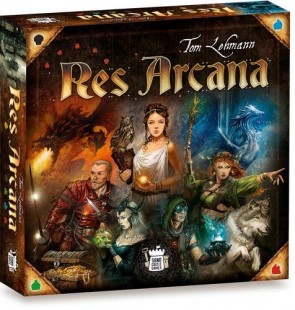 It's a nice box featuring, for some reason, the lady from Concordia repurposed as some kind of wizard. Inside more pleasant surprises await. A lidded carousel to hold five kinds of wooden token that looks nice, works well and is useful during play all at once. Card compartments that fit sleeved cards should this prove one of the one per cent of games I bother sleeving.

The rules are also nice: short and easy. Too short and easy. The aim is to use a deck of eight random Artifact cards to gain resources. Then use the resources to buy a mix of Monuments and Places of Power which are worth points. I have to check the rules several times to be sure that, yes, it's only eight and yes, they are random and yes, that's your entire deck for the whole game. First to ten wins and the rules say this takes four to six turns.

I believe this is a lie. In fact, I'm suspicious of the whole thing. It can't be this simple. It can't give each player a mere eight cards.

So I solo it: no opponents, a quick run through to see how fast I can get to ten points. And I discover that it is lying: it takes me seven turns to do it. Everything else appears to be true. And what's more, the tiny engines that you can build out of those paltry eight cards look fascinating.

Eager to try it, I rope elder daughter into a game in a fumble of anticipation. The rules are as easy as I'd hoped, but she's baffled by the iconography on the cards and how to work the mechanisms to get points. I give her a player aid and suggests she rolls with it. She shrugs dismissively and sets to.

There are eight wizards in the game, each with their own special powers. Four of them are "starter" wizards that come with a specified starting hand of three combo-friendly cards, and your other five are random. I'm a Duellist, who gets one free "Elan" resource every turn and can convert two "Death" resource into one "Gold".

My starting cards offer two clear routes to victory. One lets me play cheap Dragons, powerful Artifacts worth points in their own right. Another helps me accumulate Death which I could convert into Gold which can then buy Monuments for a source of points. You're encouraged to look at your random cards to help shape your strategy. Among the five are three dragons. So it's pretty obvious which I'm going for. Who wouldn't want dragons?

My palms start to itch.

If I didn't want to use the dragons or any other card, I can discard it instead to gain resources. So nothing is my tiny deck is useless. My cheap dragon engine is a card called Dragon Teeth so I use it right away to play a dragon. Then spot my mistake: that action means it's "tapped", and I can't use it again this turn. But there's a second action on it that lets me spend two fire resource to gain three next turn which wouldn't have tapped it. I should have done that first.

Right away it becomes clear that the game with these tiny decks is to make tiny mistakes like that count for a whole lot. Trying to claw back my lost advantage I spend the next couple of turns pumping out those cheap dragons and accumulating resources.

I'm aiming for the Dragon's Lair place of power which I can combo with my beasties for some sweet points. In my dragon-obsession, I fail to notice my opponent has accumulated exactly the resources needed to buy it and she steals it from right under my nose. With what she's already bought, it's enough for a win.

It took, what, five turns? Five turns to build a spectacular and fascinating pair of card engines, shaving tiny slivers off each other in the race to victory.

Thrilled with what I've found, I take it out to the next game night. Dragons, among a minority of cards in the game, can attack your opponents causing each of them to lose one of the same resource. Against one opponent it was an action I never bothered using. But I'm keen to bring the pain to a bigger group.

With seasoned gamers, it takes moments to set up and explain, preaching to a circle of three unbelieving faces. I run the dragons again, wanting to try out some of those aggressive moves, but there's only one in my deck, so it's time for a rethink. As the first two turns unfold you can almost see the unbelief on those faces wash away, replaced by joy. Cards are sorted, brains whirr into gear, insults are exchanged.

Then, though, the pace begins to change. With four, it's a little slow for your turn to come round. Worse, with as many players as Places of Power, the increased competition for resources begins to edge out the weaker decks. That lack of dragons in my dragon-tastic starting deck is telling because when someone starts to outpace me in a race for the same Place of Power, I have nothing. I can't beat him, and I can't switch pace to keep up with anyone else's aims.

It's not bad by any stretch. But it's not the wellspring of wonder I had promised my fellow players. I slink away, ashamed.

Back to two, then. We decide to take off the water wings and play without the starter decks. Having played for Places of Power so far I decide to try for Monuments instead and choose the Alchemist, who can turn other resources into gold. The card gods are kind and shuffle an amazing combo into my deck. First, the Tree of Life which fountains forth the Life resource, then the Ring of Midas which turns life into gold.

At first, I'm worried this is too powerful and will spoil the game. But it seems my opponent has been equally lucky, quickly putting into play a series of cards that let her swap and grow resources at will. She's soon swimming in an embarrassment of colours while I'm the one with the riches. My first monument is Solomon's Mine which, incredibly, gives me even more gold as well as some points.

By turn three we're turning the screw on each other, lost in two individual battles of will to outsmart the other. Even though there's no direct interaction you can feel the mental pressure pushing us on to work through every option, every play, to see who'll be first to the ten points needed to win. We both reach eight on the same turn and there's an agony of waiting and calculation as we try to leverage what we have to make it over the line.

Can I? No. So I take advantage of the neat first-player mechanism. The first player to end their play each round gets the first player marker for the following round, which is worth a point. So I'm on nine and she needs two the following turn. You can see the gears whirring in her head as she figures it out.

As well as cards, each turn you get a one-shot magic item from a choice of eight. She chooses carefully and picks the book of Transformation. Then she works a clever, complex series of swaps and plays to turn all she owns into Death resource and buy the Catacombs for a well-deserved win.

My head's still spinning from it as I pack away. But amidst the cyclone, a doubt grows. Could I have played that better? Is it really all down to the cards in your deck? Maybe. I was once asked why it was that I so loved Twilight Struggle, even though the first turn deal and dice-rolls can be pivotal in deciding a winner. I gave a poor answer then, but I know it now, and it's the same story for Res Arcana. When the journey, at least, in this case, a journey for two or three, is so full of fascination and wonder, what happens at the destination is irrelevant.

June 09, 2019
Rating
5.0
Res Arcana
A brilliant design that distils engine building down to such bare essentials that it almost feels like it shouldn't work, shouldn't pack so much variety - yet it does. At least for two players. three at a push.
MT
Matt Thrower #1 Reviewer 286 reviews

Legomancer replied the topic: #298183 10 Jun 2019 07:52
Your article makes me very intrigued about this game, but I own it and have played it and just haven't resonated with it in the same way. On the one hand, every game I've played of it bar one has been a teaching game, and I feel like the real meat of it comes later. But I also feel very reminded of Seasons, a game in which the whole game happens right at the beginning and then just spins out in a more or less predetermined manner.

All in all, there are other quick tableau builders I prefer that aren't nearly as fiddly (really, 5 different types of "components" were needed?) or dry.

Legomancer wrote: Your article makes me very intrigued about this game, but I own it and have played it and just haven't resonated with it in the same way .... All in all, there are other quick tableau builders I prefer that aren't nearly as fiddly (really, 5 different types of "components" were needed?) or dry.

Don't bother. It thrilled me the first time I played it and continues to do so. If it doesn't thrill you now, it won't. I don't believe it's down to teaching as the game is easy to teach. There are too many other games. Move on: Res Arcana does seem to divide opinions and it's probably just not for you.

I didn't find it dry or fiddly. Five components aren't really many to handle, and the card effects make thematic sense although it's lacking a bit in interaction. What delights me about it is how every game is a new puzzle in a very high-level sense, not in the eking out of tiny percentages from an over-simple set of effects like in, say, Dominion.

vijr replied the topic: #298209 10 Jun 2019 16:33
Great read. Matt, have you tried drafting yet? I will only draft with players that feel comfortable with the icons. However, it completely opens up the game a bit more for 2 or 3 players. Game stays extremely tight in the engine-building but you aren't up to the luck of the draw. You crafted your engine and must utilize it effectively. Running this at my weekly game group has encouraged three other players to add it to their next purchase list.

Ah_Pook replied the topic: #299054 30 Jun 2019 13:58
Not really sure where to drop this, but there's a preview for the expansion coming q4 called Lux et Tenebrae. Adds more to all the things (monuments, places of power, mages, artifacts, magic items), a fifth player, and scaling for different player counts. I'm all the way in.