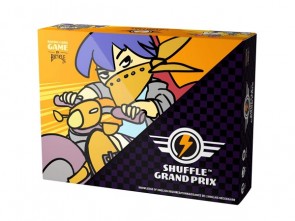 Apparently, I'm on a (unintentional) racing game jag. One of two titles debuted by United States Playing Card Company under the Bicycle Trading Card Game banner is Shuffle Grand Prix. The game simply consists of cards and some trophy chits. But it packs a surprising amount of horsepower into those high-quality cards and delivers a game that is all action and no remorse.

You may have thought, from my other reviews, that my family gaming group doesn't really dig “Take That” games. But that isn't really true. It's more of a reverse Reese's Peanut Butter Cup situation: don't put your conflict chocolate into my point salad peanut butter. Shuffle Grand Prix is pure “Take That” and offers no illusions it is anything else and we adored it for that. Of course you are going to mess with other players, that IS the game.

You begin by picking from the six available characters, all which have asymmetrical powers. You grab a driver and a co-driver, mix their power decks together and that is what you are going to be drawing your abilities from. Each character deck includes a character specific mixture of Equipment, Trap, Nerf, Action and Anytime cards. Equipment Cards add powers to your vehicle (you can have up to two pieces of equipment added to your car). Traps are just like they sound like, things you toss at other players to hurt them or benefit you. Nerf is a downgrade that you play on another players vehicle. Actions usually consist of either attacks to volley at other players or health recharges for your ride. Anytime cards are usually reactionary: A surprise attack/defense/boost that you can play anytime, even if it is not your turn.

The object of the game is to have traveled the furthest in a race before the distance cards run out. Shuffle Grand Prix has a neat mechanism that the four distance cards (25/50/75/100) have images/marks on them, so that, theoretically, you can tell at a glance how far each player has traveled. Except, in execution, the train of cards gets pretty unmanageable. Once the “train” reaches two or three feet long, you either start a second track or, more likely, just put them in a single pile to conserve space. The second isn't the optimal solution, because you do kind of want to see who is in the lead in order to target them. Then again, maybe we created an accidental variant that avoids the “King of the hill” mentality by using a single stack.

It sounds super simple but, of course, the equipment and driver powers you have can change even these simple rules. Sometimes you can draw two distance cards and play the better of them. Or play an attack card that steals another players Distance card. The opportunities are endless and Shuffle Grand Prix does an excellent job of exploring all sorts of ways to make these simple decisions really something to think about....in a good way.

Every player starts with four tire health. In order to spin someone out, you have to reduce their health to zero. Doing so grants the attacking player a trophy (which probably features an engraving extolling the virtues of bad sportsmanship). More impactful is that the player that spins out must:

The last one is particularly important since each driver has a specific, asymmetrical power and you lose that when they moved to the co-pilot position. Devastating? Maybe. Is it going to earn you an enemy for the rest of the game? Probably. Is it going to happen multiple times per game? Absolutely. Tire Heath is displayed by sliding a card under your current driver and whichever tire icons are displayed is your current health. It's easy to see, easy to grasp and easy to decide who you want to target if they appear to be weak. And you do want to gather those previously mentioned bad sportsmanship trophies because you use a single one to swap out your current driver or, if you have two, spend them to play an extra ability card on your turn.

If your gaming crew is anything like mine, it will only be a matter of time before you are rating which drivers have the best power decks and which ones work well together. The included drafting system for picking your characters and their decks may not seem important the first couple of games, but once you decide your favorites, it soon becomes a requirement.

Shuffle Grand Prix packs a lot of good-natured V-8 viciousness into a small box card game. It plays quick enough to be a filler, even with the full compliment of four players. It is in your grill action that puts you into a bumper to bumper conflict with only one player residing at the top of the crumpled car heap.

June 10, 2019
Rating
4.0
Shuffle Grand Prix
Shuffle Grand Prix packs a lot of good-natured V-8 viciousness into a small box card game. It plays quick enough to be a filler, even with the full compliment of four players. It is in your grill action that puts you into a bumper to bumper conflict with only one player residing at the top of the crumpled car heap.
W
WadeMonnig Top 10 Reviewer 195 reviews