The Quite Entertaining Game of Q.E. - A Board Game Review 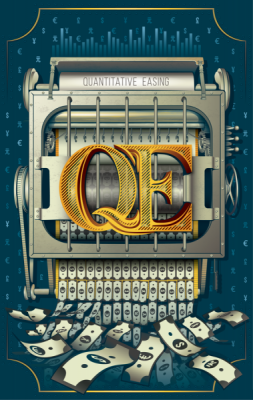 Back in 2009 I wrote a blog post claiming to have created a new board game called Holy Shit, Auctions! It was making fun of the trend in Eurogames at the time - building every game around auctions. The funny thing is, this itself was a decade after designers like Reiner Knizia had already flooded the market with umpty-jillion variants on auctions.

Auction mania eventually wore off. Four years after Holy Shit, Auctions!,  Stronghold Games published Going, Going, GONE!, which I would claim was directly inspired by Holy Shit, Auctions!  It also unfortunately postdated the auction heyday. But before the hammer fell on the field, we saw so many types of auctions that it was unclear if there was anything new under the sun, auction-wise.

2016's Q.E., designed by Gavin Birnbaum and available via Kickstarter from his Cubiko Games, was a post facto auction game with an astonishing new twist. It's a game of nothing but blind bids, with the idea being that the players are central banks who can print money. Therefore, they have an unlimited amount of money to spend. ("Q.E." stands for "Quantitative Easing", a way to try to bolster the economy by printing and introducing more money into it.) The players are bidding on tiles representing different industries and can choose to offer as much as they want, from $10 to $10 trillion to as many zeros as will fit on the bid tile. A different player each round puts a tile up for auction and writes down an open bid for it. The others then submit their bids in secret and the auctioneer writes down the winning amount on the back of the tile and hands it to the winning player. Only those two know what that winning amount was.

There are two catches, however.

First off, printing too much money, per current economic wisdom, causes inflation that can destroy the economy it was trying to save. Therefore, at the end of the game, whoever spent the most money loses. And secondly, since it's blind bidding, you only have a vague idea of how much everyone else has spent. So even though the universe itself fails to contain a number large enough to rein you in, so-called harsh economic reality can quickly do the trick. There's also the fact that some bonus victory points go to the person who spent the least money, giving more incentive to not go wild.

The tension between being able to spend whatever you want but not too much makes for a game that is never dull. You can even push the marketplace when it's your turn to set the opening bid, by ratcheting it up. This is risky, however, because if no one takes the bait and they all go under your sky-high opening bid, you bought the tile, and have spent way more than anyone else. But if it works...

The best game of this I ever played, the first auction had a tile won for about $22. Okay, fine. The next auctioneer decided he wanted to ramp it up, so he set the next opening bid for $12 MILLION. And I, like a fool, who wanted that tile, went for it. I'd now spent twelve million dollars more than anyone else and had to figure out how not to lose the game right then and there. The tile I had to auction was wanted by another player, so I lured him in with an opening bid of $9 million. Still less than I'd paid, so he could do it without losing. He did, and at that point the stakes had permanently streaked upwards.

Ultimately, Q.E. is still just a pure auction game, albeit with a single twist. But that single twist is so different and so antithetical to the genre. It shouldn't work at all, but it does, and it makes all the difference. It also shouldn't work in a board game climate in which even one of Knizia's classic auction games -- Medici -- was released as a card game with no auctions in it. That ship had sailed, or so we thought.

Birnbaum later offered a fifth player expansion to those original Kickstarter purchasers, which I finally got to play with recently. Apart from the advertised fifth player, the addition also gives all players a "View Winning Bid" tokens which, once per game, allows one to see what the winning bid was. Now, this is some excellent information to have, but we ended up not making much use of the tokens. It seemed...wrong...somehow, at least to me, even if it was used only once during the game. When I did use it, just to do so, it felt intrusive.

Until recently, Q.E. was only available in limited amounts. Birnbaum hand-made all the copies out of wood, so there are probably fewer than 250 out there. When he Kickstarted a new "print" run of 50 of them in 2018, they sold out in minutes. Fortunately, the game has been picked up by BoardGameTables.com, which Kickstarted a cardboard version. It's not available yet but it's definitely worth keeping an eye out for if you're looking for something that breathes new life into a hoary old genre. Once more, you'll be excited about auctions.

Vysetron replied the topic: #298677 20 Jun 2019 08:53
Count me down for another copy of Holy Shit, Auctions! I can't wait to waste a bunch of time nickel and diming for every single little thing. Actually wait, I think that's just Modern Art.

QE looks great. It's very much a twist on High Society, but why not riff on the best? I actually backed this one and they just confirmed addresses. Should show up soonish I reckon.

engineer Al replied the topic: #298683 20 Jun 2019 10:02
I got to play Dave’s handmade wooden copy of this at the last Trashfest. It was certainly a fun and different take on the auction genre. I’m looking forward to playing it again.

Quantitative easing does refer to a form of stimulating the economy by printing money, but I think the sublety of the term is worth poking here. Quantitative easing is specifically a way to bolster the economy not by altering interest rates by buying and selling government bonds from government supply (normal way to do this) but by *buying large amounts of everyday normal market assets with newly printed money*. Modern QE was practiced in the wake of the great recession as countries ran out of interest rate leverage (you can't set nominal interest rate below 0) and still needed to stimulate. The Japanese government has done a huge amount of QE for a long time so the government has this huge and nutty balance sheet of things it technically owns.

Why mention this? Not as an "actually," but I think it's making the game more thematic when you think of how it plays. It's encouraging players to think about what "value" actually means for everyday assets and not just in terms of currency numbers. What QE is referring to here is the idea that every asset's nominal value in a fiat money economy is an arbitrary number ultimately grounded in trust both that the government will pay back its loans, you will need/be forced to use the money to pay your taxes, and that ultimately others within your country will accept the money for goods and services. So a sort of elaborate social contract based on trust, somewhat coerced by the government (re: tax payment specifically). The value of actual assets in nominal terms is completely arbitrary, and I think that's what this game is trying to illustrate.

Then there's the inflation angle on this but the game isn't really out to teach a big lesson on inflation stuff, which is fine.

cubikoman replied the topic: #298728 21 Jun 2019 07:57
Thanks for the review.
I can't remember the exact math off the top of my head but when a 5 player version with only 15 rounds was tabled I worked out that the 'view winning bid' was the simpliest solution to getting the correct balance of information. Of course, a pure 5 player game would have 25 auctions without 'View Winning Bid'.

jeb replied the topic: #298736 21 Jun 2019 09:57
My worry about the game is that it might be a little "insider" to the board game community. Is it only really cool and interesting if you've already played a zillion auction games, and the new twist appeals? Or can someone that's not steeped in MODERN ART, MEDICI, POWER GRID, &c see how cool it is?