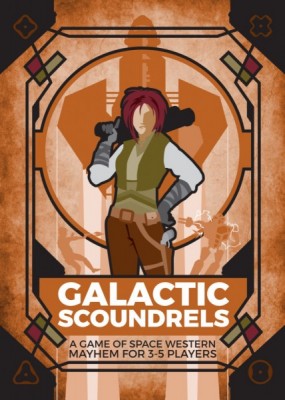 Galactic Scoundrels is a game that’s deeply interested in the fuzzy, ill-defined spaces between categories. In this way, it resembles the media it so clearly draws from: movies like Star Wars and television shows like Firefly and Cowboy Bebop. These franchises have one foot in the stars and one foot in the American West (as well as samurai tales, and crime thrillers, and war stories—ok, I guess we might need more feet). While these films and shows feature immediately recognizable genre motifs, they’re unwilling to commit to the rigidities of a single type of storytelling. Instead, they create a boundary-breaking mashup of formal elements and styles, gleefully reveling in their grab bags of shady outlaws, daring heists, and evil empires. The message is clear: in these undefined spaces, there is whole lot of fun to be had.

Galactic Scoundrels takes this ethos and brings it to the gaming table, asking players to create their own brand of space western while bending / blending established tabletop genres in the process. GS is a card-based storytelling game (or is it a storytelling-based card game?) that puts players in the roles of space captains trying to gamble, cheat, and steal their way through a series of jobs. Ostensibly, the game is competitive—your goal, as a captain, is to accumulate the most money over the course of the game, which involves using your resources to circumvent trouble as you put roadblocks down in your opponents’ way. However, this is a bit of sleight-of-hand on the game’s part, because if you play the game this way—as a mechanical competition leading to a defined resolution—you’re going to be mighty disappointed.

Instead, the real goal of the game is simpler, but much harder to achieve: to tell a bunch of funny, interesting stories with your friends. Galactic Scoundrels exists in a strange space—it has the mechanical backbone of a resource-management card game with heavy take that elements, but this framework really only exists as a skeleton for players to build stories on. I find this hybrid approach immensely appealing, and I think it fills a vital role in the tabletop ecosystem.

I’m someone who has devoted hundreds (if not thousands) of hours to role-playing in my life. This has been immensely satisfying, but while it was nothing in my teens to spend an entire weekend dungeon-delving with friends, juggling grown-up responsibilities and erratic adult schedules means that running a sustained role-playing campaign seems to get harder and harder. So, I find myself drawn to these more guided, contained experiences with the hopes that they will replicate the joy of collaborative storytelling without the baggage of a more traditional role-playing game.

So how does Galactic Scoundrels take on this (none-too-simple) task? I won’t delve too deep into the rules for a couple reasons: first, it would be dreadfully boring; and second, for a game whose primary purpose is storytelling, GS is a surprisingly crunchy experience with lots of little rules and exceptions. But a standard round might look something like this. First, all captains at the table bid for a job on offer, using their cards as a makeshift poker hand to bluff and best each other—the winner gets the opportunity to take on the job. This player gets an opportunity to outfit their ship with cargo and crew members and passengers (all cards from their hand or a reserve called the “stash”), and then they are at the mercy of other players, who get a set number of turns to play cards trying to complicate the job. The protagonist then gets to react to these challenges by playing cards from their hand. For example, if one of their opponents plays a “Cyborg” card with a wrench symbol and a brain symbol on it, they might play a “Trait” card from their hand that contains one of the matching symbols. The players continue doing this until the jobbing player makes it through a predetermined set of rounds or is forced to flee, at which point the other players get to bid to take it over. Players are encouraged to narrate the twists and turns this card play creates, stitching together individual moments into a fully-fleshed scoundrel’s tale.

The answer is, sometimes! Galactic Scoundrels is at its best when it’s leaning into the genre material it so clearly loves. Negotiating and bluffing and messing with each other is funny and engaging and feels like a great fit for a game about spacefaring ne’er-do-wells. However, the symbol-matching card play you spend most of your time doing feels flat and mechanical, relying on players to do the heavy lifting of creating something special out of a few random space-related nouns.

A friend I played with said it best: “This game gives out what you put into it.” Which is to say, if you play this game with a group of people who are naturally creative and funny, you’re going to have a great time spinning yarns together. I know I did—our group now has great stories about knife-wielding robot nannies and broken intergalactic toll booths and a space leviathan rodeo. But I would be nervous breaking this game out with strangers, or with people who might need a little more narrative tissue to work with than this game can provide. It just doesn’t give these folks the tools they could use to elevate their storytelling skills beyond what they’re capable of naturally. But, for the right group with a fondness for space junk and the ability to make their friends laugh, Galactic Scoundrels provides a delightful playground to explore.

AndrewMcAlpine replied the topic: #298834 25 Jun 2019 10:07
Hi folks! I just wanted to let you know that this will be my last article for There Will Be Games—I’m moving on to other things. I’ve really enjoyed sharing my thoughts with y’all over the past year. Thanks for reading, and I’ll be around on Twitter (@andrewmcalpine) if you’re interested in keeping up with my writing and other creative projects.

Thanks for your words Andrew, sad to see you go, but fair enough.
Read More...