Are you a Robot? Board Game Review 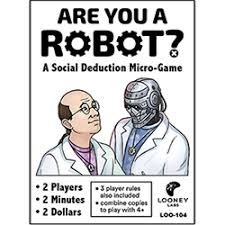 Game Name
Are you a Robot?
Publisher
Looney Labs
There Will Be Games

Putting the microchip in micro games.

First Bruce: 'Ow are you, Bruce?

First Bruce: Gentleman, I'd like to introduce a man from Pommeyland who is joining us this year in the definitely-not-a-robot department at the University of Walamaloo.

Second Bruce: Is your name not Bruce?

Michael: No, it's Michael.

Second Bruce: That's going to cause a little confusion.

First Bruce: Mind if we call you 'Bruce' to keep it clear? Gentlemen, I think we better begin the rules breakdown meeting. Before we start, though, I'd like to ask the padre for a prayer.

Second Bruce: Oh Lord, we beseech Thee, let there be no robots among us. Amen!!

Second Bruce: I'd like to welcome the pommey bastard to God's own Earth, and remind him that we don't like cold, calculating, emotionless robots here.

Second Bruce: Those are all robots!

Second Bruce: Another tube! (Sound of cans opening) Any questions?

First Bruce: New-Bruce, are you a Robot?

Second Bruce: Are you a Robot?

First Bruce: No. Right, I just want to remind you of the faculty rules: Rule One!

Every Bruce: No Robots!

First Bruce: Rule Two: There are only three cards in the Looney Labs game “Are you a Robot?” Two cards that Say “You are a human” and one that says “You are a Robot.” In a three-player game, you deal out one card to every player. You then ask questions of the other players to try to suss out the robot. Of course, anyone can lie.

First Bruce: Yes sir, nasty little buggers. I believe it's the fifteenth law of Asimov's “42 laws of Robotics.”
“Never trust a thing a robot says, they have determined that lying does not keep them out of Silicon Heaven.”

First Bruce: Rule Three: The game ends when a player points at another player and says “Zap!” If that other player is a robot, the humans win. If that player was a human, the Robot wins. Robots, despite what Arnold Schwarzenegger may have taught you, can not shoot.

Second Bruce: Crikey, next thing you know you'll be telling me the three-breasted Total Recall scene was faked.

First Bruce: Just like the moon landing, mate. Eccentrica Gallumbits, the far-famed triple-breasted whore of Eroticon Six, on the other hand, is completely real...just hidden by a S.E.P. Field.

Second Bruce: Rule Four, now in this game, I don't want to catch anybody not drinking.....

First Bruce: Right, that concludes the readin' of the rules, Bruce.

Scond Bruce: What about the two-player game?

First Bruce: The two-player game has the absolute hook. The moment in the game that all titles strive for. In a two-player, two of the three cards are dealt out. So, you are never quite sure if there is a robot in the game. Once again, the Robot can't shoot but, if both players agree that they are human, they can shake hands. If they are both Human, they high-five and win the game. However, If one of them is the Robot, when the players shake hands, the robot doesn't.let.go. And the Human player's eyes widening as they try to pull away...Howls of derisive laughter, Bruce!

Michael: Well, it doesn't sound like it's much of a game, sort of Werewolf-ish and zero information deduction.

Second Bruce: I’d like to remind new Bruce that we don’t like stuck-up sticky-beaks here. Aren't you the guy who swore that The Mind wasn't “really” a game?

First Bruce: Are you a Robot? I definitely think he's the robot. *Points his blaster at Michael*

Second Bruce: I call upon you, padre, to close this robots life with a prayer.

The author would like to give all possible homage to the Monty Python comedy troupe.

A copy of this game was provided by the publisher. Therewillbe.games would like to thank them for their support.

Then I would have to write a review based on a George of the Jungle episode.