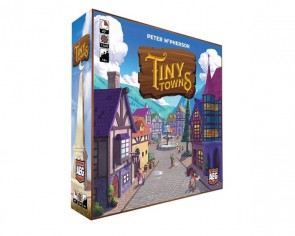 Tiny Towns may look idyllic on the surface but underneath it's a perplexing puzzle.

Ok back it up. Steady! We don’t want to crush the Bakery. That’s it. Slowly now. Hopefully today’s delivery will be more useful that yesterday’s one of wheat which I just had to shove next to the Chapel. MORE WHEAT! What the hell? You tell that Master Builder to come down here and explain himself. I’ve got cottages to build and could do with some actual brick or glass not more wheat! Right. Fine. Well at least this next delivery surely couldn’t be more wheat. Why are you backing away from me? Is it Wheat? Come back here!

Tiny Towns is the latest game from Alderac Entertainment Group, designed by Peter McPherson. The game sees 1 to 6 players, I've not played the solo mode, using pattern matching to construct towns that are indeed diminutive in nature and that for reasons unexplained are occupied by anthropomorphic animals (not that it makes a jot of difference who is living there as far as the game is concerned).

As a product it’s a really nicely put together package full of bright colours, beautiful art and wooden pieces that just have a lovely tactile feel over the potential plastic choice that could have been made. Even before breaking out the rules I was smiling. 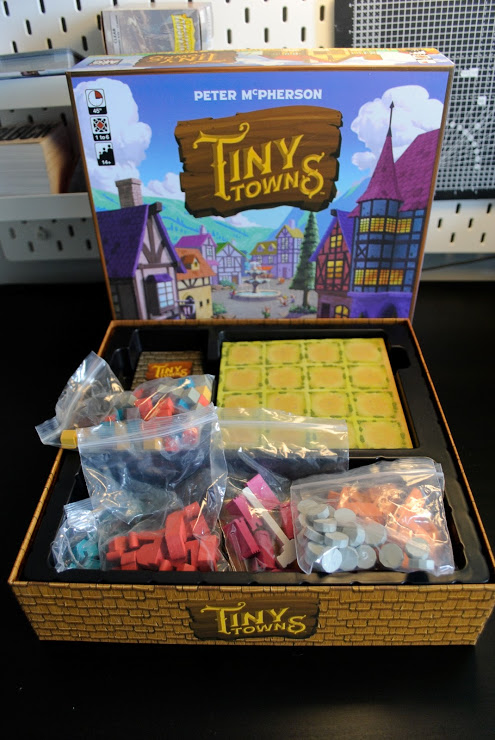 Day to day life in your Tiny Town is pretty straightforward, though you will quickly find that it is far from idyllic.  The Master Builder, who is indicated by an adorable wooden hammer, will deliver the same resource to every town and each player has to decide where that is going to go in their burgeoning burgh. Once done, each town can then erect structures from the choices in front of them, matching the pattern on their board to the buildings on display. Resources are removed, buildings appear on one of the squares they occupied and that adorable hammer is passed onto the next player to become the Master Builder. 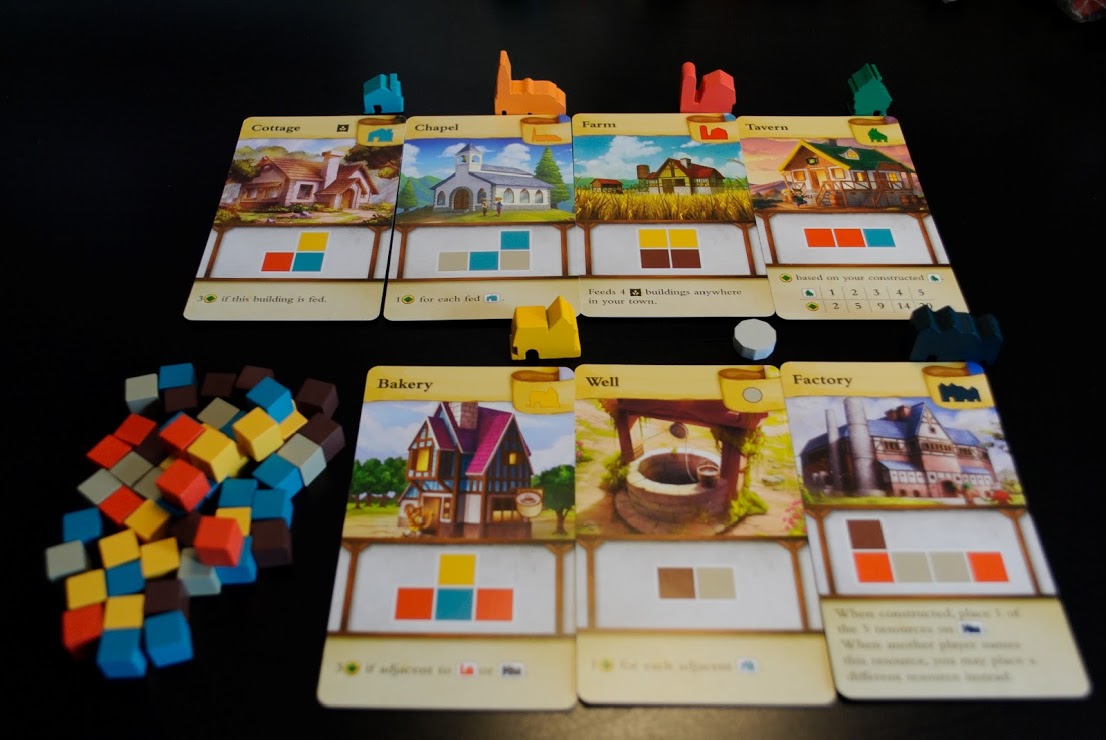 Yes it’s a simple life on the surface of it, but dig a little deeper and village life isn’t quite as idyllic.. Each of the buildings you can choose produces points in different ways and at the end of the day you want the most points to prove who has the tiniest town.

As in most hamlets the Cottage is always present but the rest of the buildings can be different each time. The beginner’s setup, which I loved that they include, is pretty straightforward. Farms feed Cottages, up to 4 anywhere on your board, and each fed cottage is worth 3 points. Maybe your next game though your don’t have the Farm but the Orchard instead. Now cottages will only be fed if they are in the same row or column as the Orchard. Each time you play you are going to have a unique puzzle to solve, putting restrictions on how you build your miniscule metropolis. 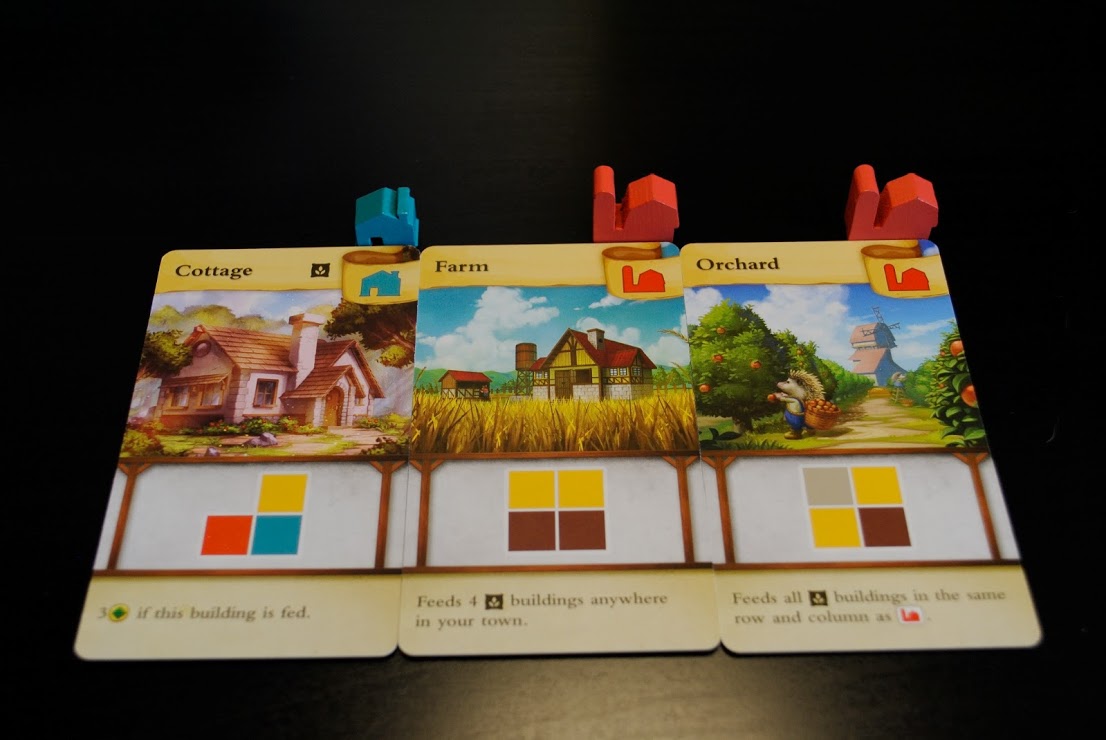 Now you might be thinking that we could all just build the same town, and you could. Each town could have the same layout since everyone is using the same sequence of resources. That would be the case if it weren’t for the monuments. Each player gets dealt two of these special buildings at the start of the game, choosing one and keeping it secret from everyone else. Unlike the rest of the choices available, your monument can only be built once and will have some powerful effect on the game. 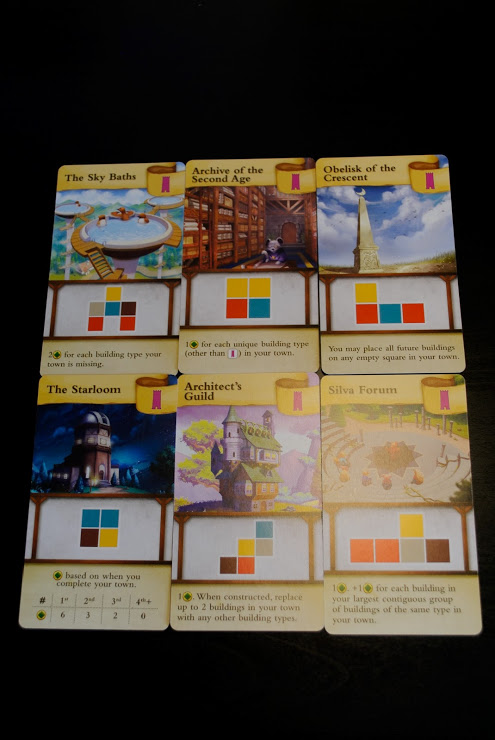 As you build the town is going to get choked with resources, you’ll think that you were cunning placing that bit of wood there earlier, but now you can’t put a chapel in the space left and why on earth did Dave just choose stone again! You are going to find yourself frustrated by this game, but it’s the good kind. The kind that makes you tear your hair out then realise everyone else is doing the same and laughing about it.  For some people that frustration can prove too much,

Build it on up

The monuments, the ever changing conditions that you are placing resources under and the shared realisations of mistakes made several turns ago, turn what could be a rather incidental game into one with some bite to it. You can, and I have, make resource choices based on other players boards and there is a joy in manipulating the flow in that way. I must admit a lot of the time the focus is so much on what is in front of you that it is easy to miss an opportunity to be this clever.

There is a risk of analysis paralysis slowing the game to a halt, especially at higher player counts. If you are playing with lots of people, or just fancy not blaming your friends for their cunning/ annoying resource choices, then you can turn to the deck instead. This takes over the role of the Master Builder, dolling out random resources for a couple of rounds and then letting everyone choose for themselves on the third.

Initially I liked this mode more, everyone following the same puzzle with the flexibility of the third resource providing a diverging point. However, over repeated plays I actually think the Master Builder mechanic gives a lot more tactical control to the players, adding a frisson of player interaction that would be otherwise missing from these towns.

A place to call home

I picked up Tiny Towns partly due to its ability to take a high player count, I often cater for 5 to 6 players at a time, and I worried that the low player interaction wouldn’t sit well with my group. What it lacks in direct player interaction it makes up for in a shared emotional state: the moment of realisation that you’ve mucked up your own plans,  looking up to realise that you aren’t alone and you are all trying to dig yourself out of your respective holes. That’s a beautiful moment and over the course of many games I’ve shared moments of triumph and commiseration as plans come together and fall apart. Look past the odd, twee cover and the games gateway credentials and you’ll find a great little tactical game with a huge amount of replayability and an ever so slightly mean edge.

This review is based off a copy that I bought with my own money.

I like city builders so it is interesting to me; is this a game you could play casually with players like dinner guests or is it too gamey?

thegiantbrain replied the topic: #299417 09 Jul 2019 02:07
I have found teaching this one to be very straightforward so it should be easy enough to get folk with a less in depth knowledge of boardgames into playing it. There is definitely some tactical bite to it, but that can emerge after a couple of plays.

I think it has been a big hit outside of the BGG bubble. It's getting lot's of buzz on social media. From Iain's review I now understand why.

AEG recently posted: "We are thrilled to announce that all of the Tiny Towns we have for the Brick and Mortar launch have now been sold through to distribution."

thegiantbrain replied the topic: #299478 09 Jul 2019 18:07
It is super accessible and I've seen some people to compare it to match games and similar on mobile. I think it has just hit that right balance between being approachable enough for new people and having just enough bite for people to replay it and look at different tactics.
Read More...