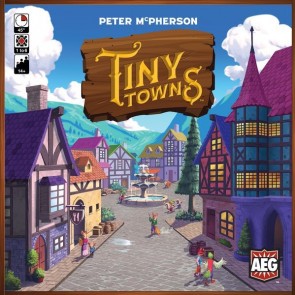 The most successful mobile games share a few common attributes. Simple rules, at least on the outset. A broadly appealing art style that won't alienate anyone. Short play time. Perhaps most importantly, gameplay that hooks players into that "just one more round" loop. Tiny Towns succeeds at all of this, so it should be good. And yet...

Tiny Towns gets a lot of comparison to the genre du jour, roll and writes. This is an apt comparison on the surface as every player makes the most of common resources on their own playerboard and direct conflict is nowhere to be found. It's also an innaccurate comparison. Tiny Towns is highly interactive, and its all thanks to its central mechanism: resource calling. Each turn one player is given The Tiny Wooden Hammer and designated The Master Builder. They call out one of the resources. Every player must then take a matching resource and place it somewhere in their titular tiny town. This typically results in shouting and suggestions as to where your neighbor can shove all their glass cubes. Create a legal combination of resources based on the 8 buildables dealt at the beginning of the game and you may scoop up your resources to build that feature in one of the resource'd squares. Pass the hammer, do this until everyone can't anymore, then score points. Simple.

Scoring is where my issues with the game start to crop up. Tracking the scoring conditions and build patterns for 8 buildings each play is kind of a lot for a game this light, doubly so if you can't read the cards from where you're seated in a 5+ player game. This wouldn't be a problem if you could reasonably keep a running tally or if the game scored for you, but alas, analog games. Ideally you would form a plan and act on it once you set the cards up, but the resource calling forces entirely tactical decision making reinforced by groupthink. If a couple players decide to lean into building cottages and are calling resources accordingly, you'd better abandon that church plan and get subdividing because you're not going to get what you need otherwise. It's a game that demands homogeneity or death in many cases. This is partially remedied by playing with the resource deck instead, which simply generates resources at random for the table, but then the game loses what's arguably its most fun attribute and truly becomes the multiplayer solitaire it appears to be. For some this will be a preferable variant, but my plays with the deck left the game feeling sterile and disappointing. Gone were all the reasons to watch your neighbors and maneuver, replaced by simply building whatever the deck made easier to build. Pleasant, sure, but not as good.

All of the above is negative, but it doesn't ruin the game. In fact I think what's here is rather well done. However, what I consider to be Tiny Town’s greatest weakness is its medium. Mobile games can be updated at will, providing new content to players in order to keep them engaged. They're also faster, score for you, don't need a significant amount of setup or cleanup for a game this short, and don't need to be stored in a Ticket to Ride-sized box. In bringing the mobile experience to the analog world it sacrifices the most important piece of the puzzle that I intentionally left out of the list up top: that you can play an app for 5 minutes, have a complete experience, and then slip it into your pocket until the mood strikes you again. Tiny Towns is an excellent 5 minute mobile game stretched over 20-30 minutes.

In the game's defense I do think McPherson and AEG succeeded at their goals here. Credit where credit's due, this is a damn good first published design. Tiny Towns is immediately appealing and approachable for just about anyone. It's short, and as such you'll likely play it multiple times in a row. It definitely gets its hooks in easily and for some, I'm sure, that's enough. If it does become popular enough to get a mobile adaptation maybe then it'll be the game it aims to be. But until then, Tiny Towns will just be a game that succeeds at doing a little with a lot.