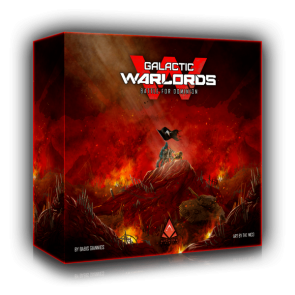 Game Name
Galactic Warlords
There Will Be Games

Reaching into the blazing red box, I pull out handfuls of plastic troops and tanks, to a chorus of disinterest. If it's going to be that kind of game, they want to know why we don't just play Risk: Legacy or Nexus Ops instead. "Bear with me," I plead, hiding a half-smirk. Because I've soloed this game, and I know it's not that kind of game. Well, not quite anyway.

As the board pops flat and I start skimming face-down planets across it like frisbees, interest begins to improve. I give each player a ship token, forlornly two dimensional in its stand against the sculpted figures, and explain they'll be moving this around the galaxy sectors on the board. You can explore planets in your sector by flipping them over, and you can only normally deploy troops where your ship is.

It's lucky I can explain this. After reading the short rules I figured the game was quite simple. It's fortunate, then, that I took the time to solo Galactic Warlords: Battle for Dominion and found all sorts of nagging loose ends. The answers are in the book, just not in the logical order you might expect to find them. Definitely, one to check before you try and teach.

Everyone makes a pile of their little troopers, except for Steve who, like Steve always does, arranges them in neat columns. Amidst the infantry are three tanks and two aircraft which we treat like plastic gold. That's partly because they're powerhouses: Tanks are an offensive battering ram while aircraft give you deployment flexibility. But the real reason is that they're irreplaceable. Infantry casualties work their way back into your launch pile. But when a tank or aircraft is gone, it's gone forever.

Armed with plastic, we get stuck in. The cardboard ships begin probing planets, flipping them to find out what colour they are. We begin to play mercenary cards from our hands, festooned with bright icons and characterful sci-fi art. With each one, I can feel the vibes around the table begin to tighten. One of the icons matches planet colours, worth points at the end of the game if you control planets of that colour. Others determine your actions for the round.

By the end of the first turn, comparisons to Risk and Nexus Ops are pretty much forgotten.

On the second turn, though, the lizard brains we'd be overriding to admire all these clever interlocking mechanics push back into the fore. We're itching to get stuck into one another. Headless of whether or not I should be exploring a different sector, or using an action to gain reputation, I move my ship toward a neighbours planet and drop a mercenary that unleashes hell. First, a bombardment to kill some occupying troops. Then an invasion to parachute mine onto the surface. I can practically hear the dropships falling.

There are some fiddly rules about defenders getting extra reinforcements but he doesn't qualify. Grimly he picks up one dice against my three. Neither of us is willing to risk a tank. One roll and it's all over, a simple matter of rolling hit faces that kill units. The planet is mine. But there's a nasty sting in the tail.

Planets are worth points. Points when you conquer them, points for matching mercenaries, big points at the end of the game. Except they might not be. In a gloriously thematic twist, each time you fight over a planet it becomes worth fewer points. The smoking, irradiated battlefields left after several campaigns are literally worthless. We need to pick our battles carefully, else we'll find ourselves lording it over wastelands.

And so begins the great wrestle for domination. Not just of the galaxy, but of forebrain against hindbrain. Of carefully matching colours and symbols against the simple joy of tossing plastic around.

After a while, it feels like I've spotted a smart way to do both. Target colours other people are going for, not necessarily to win but to make them less valuable. Doing this sees the first commitment of an aircraft to the fight and you can feel the tension crank up as soon as they're deployed, a big impact for such tiny models. I can feel the dice sticking to my sweaty palms as I pick them up.

My spoiling attack succeeds, but I lose the craft. A double-edged sword. It seems just, somehow.

Wanting to will the dice to win, I decide to try the solo variant again. The fact that there even is a solo variant is pretty telling that this isn't your grandma's dudes on a map game. It uses a deck of cards to determine where the AI will attack and with what actions and it's pretty good. I win, but I miss the fact it doesn't smack-talk me though or line up its troops in neat little rows.

Next time everyone's up for a little smack-talk, there are no complaints when Galactic Warlords comes off the shelf. It's earned itself a little niche, both like and unlike its brightly-coloured, plastic-filled kin. A game for when you want to think, but also want the edge of not quite knowing how the cubes will bounce.

One day, I mention to someone in games retail that my next slot is going to cover Galactic Warlords. I opine that it hasn't had the coverage it deserves. This comment draws a blank look and the reply "never heard of it, so yeah, it needs the exposure." That reply, from someone in games retail. The game might deserve a shot at the long haul, or it might not. But the saddest thing is that amidst the deluge, we'll probably never get the chance to find out.

ubarose replied the topic: #299370 08 Jul 2019 14:38
Decreasing a planet's worth when they have been fought over is an interesting concept. That sounds like it would really change-up the approach we tend to have to area control games.
Read More...