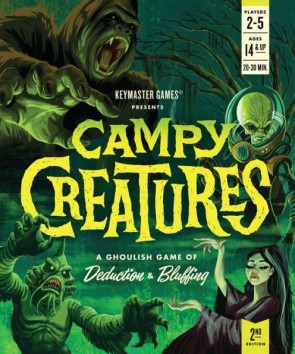 This isn't Sushi Ghouls. Instead of pick-and-pass set collection, this is competitive set selection with monsters clashing for the right to be the first to capture a mortal.

The newly release 2nd edition of Campy Creatures supports two to five players. At the end of three rounds, you want to be the monster with the most victory points from collecting the highest point value mortals that are silly enough to be skulking around where there be monsters.

Campy Creatures features look-alikes of classic monsters that Universal Studios tries to reboot into a “Dark Universe” about once every five years. You know them, you love them but lets look at how they interact with each other. A turn consists of revealing Mortals equal to the number of players and each player selecting a monster to play. The monster with the highest number wins...with a few diabolical powers thrown in and a clash-o-meter for those pesky little ties. Below is a list of all the base monsters and the corresponding strength and individual power.

The Blob – (0) Pick a monster from your hand to use his strength.
The Swamp Creature (possibly from the Black Lagoon) – (1) Give the mortal you capture to another player
The Invisible Man – (2) You may discard the mortal you capture
The Mummy (See, I told you. Didn't Tom Cruise just try to save this franchise?) (3) Capture immediately if the Kaiju is in play.
The Invader (from the next planet over)– (4) Capture two mortals if possible
The Werewolf (5) Force the player to your right to discard a creature.
The Vampire (6) Negate the ability of the creature to your left.
The Beast (7) An interesting one, if you still have this in your hand at the end of the round, you score three points.
Kaiju (8) Stepping on opponents like Godzilla versus Bambi (not a power, just a fact).
The Demogorgon (2) Returns the Mortal you would normally capture to the bottom of the deck and take one from the top...but you get to play it face down. It is an Alternate monster that you can swap into your deck, replacing The Invisible Man. Well, I've heard of Stranger Things. 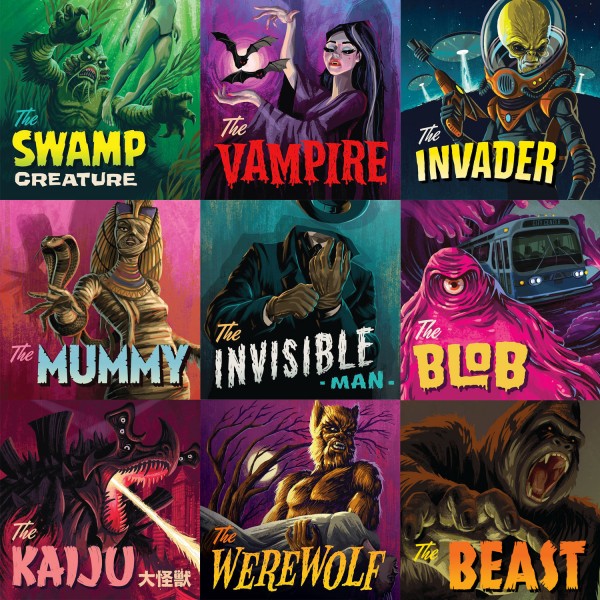 The cool tie breaking mechanism, which you will constantly be using, is The Clash-o-meter. Each player is represented on “The Clash-o-meter” by their eye-con. If a player is above the other players they tie with, they win the tie and are then, subsequently, moved to the bottom of the Clash-o-meter.

When the monster powers activate, the game uses a simple dot system. If the monster power has one dot beside it, it activates as soon as all the cards are revealed. If it has two dots, it activates when it is that monsters turn to capture a mortal. The timing is important but it's a simple enough system that you won't even have to think twice about it after a few rounds.

I will say that I'm not a huge fan of non-focused hostility cards. I'm referring specifically to the Werewolf and Vampire cards that causes bad things to happen to the person to your left or right. It feels like it severely limits their strategic use and, usually, earns you surly side-eye from the player you (maybe inadvertently) screwed over. Another minor complaint, one that it shares with Sushi Go Party, is that you have to assemble the mortal decks according to the number of people playing. You can't simply pull out the game and start playing. Granted, it only takes a couple of minutes to set up (and involves pulling out the instruction manual because, come on, I don't have that information memorized). It is also up to you to choose which “Sets” of Mortals you wish to play with. The base set is always used but you can mix it up with Classics, Teenagers, Engineers, and Assistants. 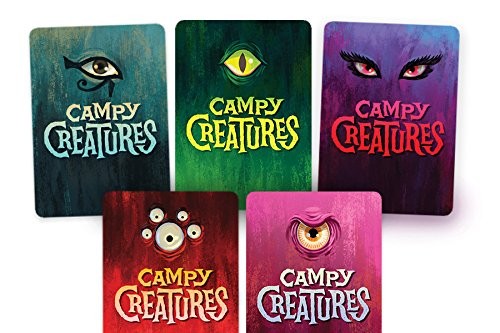 New to second edition is the removal of the “creeples.” While they were undoubtedly cool looking, the simplicity of the Eye-cons and their ability to share spaces on the diminutive board was the right function over form choice. Another new addition is the “Assistant” mortals, you keep these mortals round after round and score at the end of the game. Combining these with the Location cards (a rule bending card that is won by the player who has the most creepy old Scooby Doo mansion symbols on their mortal cards at the end of the round), helps address concerns that the game can get a bit “samey” after a few plays. They also added in alternative scoring rules: One I like has the victory points resetting after each round. Instead of ongoing scoring, the round winner is awarded with a token. This stops players from getting discouraged if they fall further and further behind. Instead, you can try to win the next round to catch up to the leader. We usually played first to three “Victory Tokens” was the winner but you could even shorten it to the first to secure two tokens wins.

There are a few easily missed rules, like “Only the player who clashed and captured first among the clashed players moves to the bottom at the end of a turn” or that Assistants, if discarded or not captured, are removed from the game instead of being added back to the Mortal Deck. They may seem a bit fiddly for a simple card game but it is obvious they were included (or added) in order to work out a proper balance.

Campy Creatures is an entertaining take on competitive set collection. It has push your luck in the form of the Engineer Mortals (They may score positively or negatively depending if you have an odd or even number of them at the end of a round). Teenagers push the luck to a lesser degree, scoring a single point but giving a bonus for whoever has the most/second most at the end of the round. It's hard to find something as satisfying as watching a player try to stick you with a negative point mortal only to turn the tables and use a monster power to give that very mortal to them.

Shellhead replied the topic: #299740 17 Jul 2019 10:14
I played first edition once, and liked it. The visual design is excellent. The game is a moderately entertaining filler that doesn't quite wear out its welcome by the end of the game. The second edition changes sound like they improve the game enough to the point where I might want to buy this, even though I'm not big on filler games.

Shellhead wrote: I played first edition once, and liked it. The visual design is excellent. The game is a moderately entertaining filler that doesn't quite wear out its welcome by the end of the game. The second edition changes sound like they improve the game enough to the point where I might want to buy this, even though I'm not big on filler games.

There is an update kit available for purchase for first edition owners and a expansion that I will be reviewing in the next few weeks. More awesome art!

I don’t think I care anything about playing it though, sadly.

Vysetron replied the topic: #299768 18 Jul 2019 08:41
Art is absolutely amazing. Game is fine. I played the first ed. a few times and it sounds like the changes were more production than mechanical.

However, I'm cagey about supporting it because it very clearly lifted stuff from Eggs and Empires. Not just the framework (simultaneous play, grabbing score cards in order, play until out of cards), but a fair number of the actual card effects.