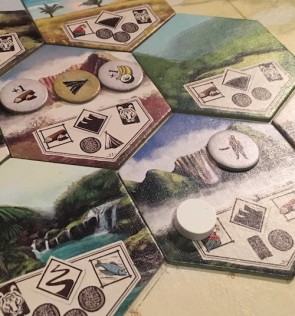 The oft-told story of a marooned man left shipwrecked and abandoned on an island, far from home and with none but a dog and two cats for company as he languishes there for eight and twenty years. Beset by the isolation and the cannibals it was a harsh and unforgiving experience and one which, I imagine he would have not wanted to repeat unless it was to sell more books.

Unforgiving is a very apt description of the board game representation of this fictional character and his trials and tribulations, alone on that desert island. This game is difficult, but in spite of this it is still very enjoyable. We all know that the fun quotient tails off the easier a game becomes and the simpler it is to win; who hasn’t played Fifa on the lowest setting trying to see how many goals they can score because they’ve become too familiar and competent with the game itself? Robinson Crusoe has many rules, many components and many hours worth of play in it because it is so godamn difficult.

The basic elevator pitch goes something like: you have been shipwrecked on an island with limited supplies, tools or help and must survive everything the island throws at you for a set period of time or until a set goal is reached. Be warned, the island is throwing numerous things at you: the weather, indigenous animals with scary claws and bitey teeth, sudden and devastating loss of your food stores, an inexplicable fog that prevents hunting or gathering and so on. Each of these troublesome complications can appear on their own or at the same time to create a maelstrom of game-ending complexities that have you pulling your hair out trying to decide how best to fix or proceed. Do you shore up the roof on your camp in anticipation of the approaching snow storms or try to build one of the many inventions that might preserve what little food you have? Or do you try to build a weapon to defeat the bear or tiger that lurks within the forest, waiting to pounce?

Robinson Crusoe: The Board Game is played using one of the scenarios that give you a ‘simple’ objective to complete. These objectives (e.g. stockpile wood so that you can make a signal fire to alert nearby ships to your predicament) appear on the surface to be fairly straightforward albeit a tad esoteric when viewed against the backdrop of your shipwrecked environment. All must be played out over a number of rounds, and of course, within those rounds, there are a number of actions that each player can perform.

Now here is the sticking point. The rules are long and involved and weirdly translated and not easy to follow at first glance. Due to the complexity of the game itself, I suppose it is fair to say that the rule writers had a hard time trying to distil into easily digestible chunks the important parts of the game and the various actions in between. There is also the difficulty of translation from the original Polish version. Fair enough, but there are also grey areas: no one is quite sure what happens if I do this and they do that and then the bear jumps out and rips the clothes off your back, can I hit them with the food crate?

There is also lot of flicking back and forth through the pages to make sure that you are doing things in the correct order, or to check how the weather phase happens (something which my brain seems incapable of remembering). After a few plays, you become more familiar with the phases and the order of actions and therefore wherein the rules to look for clarification.

Actions cover the basic gamut of gathering, searching, beating up an animal, trying in vain to build some useful tool or putting your feet up and getting some well-earned rest. This last one is almost never done due to the sheer insanity of wasting an action sitting on your arse whilst your fellow players frantically attempt to prevent injury or death. Each player makes their action choice by placing one of their two tokens on the requisite space on the board. Placing two tokens means that you have accomplished your task with no ill effects, placing only one will mean that the fate of your chosen task is left in the hands of a dice roll, well the roll of three dice. Each die has the ability to pass the test, not pass it and get a reward token for your efforts or not pass the test, not get a reward but get some kind of injury.

Now the key point here is that getting an injury in the first couple of rounds isn’t too much of a problem; you start with a ‘healthy’ health track which allows for a number of hits before anything bad happens, but more importantly is that if you fail the task you miss out on whatever precious item you were trying to acquire which might be as simple as gathering wood or food. I may have forgotten to mention that you also need food and wood to cover every player at the end of every round. So, as you focus on getting that shovel or weaving a basket or making a shield you will also need to be thinking about getting basic wood and food needed just to survive. If you fail to get sufficient of either at the end of a round you get an injury. If you haven’t got enough wood to build a roof on your camp and it rains you get an injury. You can also get an injury if an animal attacks the camp and you haven’t collected enough resources to build any weapons to defend yourself. To be honest, once you get past round three you’re almost guaranteed to get an injury for doing anything, or doing nothing, event for just turning up and playing the game. The only time you don’t get an injury is when your dead or not playing the game, or both.

There are so many plates to spin and watch whilst trying to wrestle a mountain lion as your building a nice camp veranda and putting on a roof in the pouring rain, but, for me, this is a great joy and the pull of this board game. There is a lot that can be done, many things to think about and this makes it frustrating yet absorbing.

Robinson Crusoe is my favourite board game. There I’ve said it.

Gary Sax replied the topic: #300249 30 Jul 2019 00:25
The new edition of the rules, I think based off the German version, is far clearer and exhaustive of situations. So if you bought this now new, you're in good shape for rules. The old version was a bit iffy, but few of the confusions could ruin a game.

Still one of my favorite games, we play it periodically and it really is better than many of its peers. I actually disagree with your review a bit; I think this game is *very* editorial for the genre it's in, adventure game. It communicates a lot with a pretty simple euro worker placement structure. It wouldn't work if you didn't have *so few* workers, which really brings out the scarcity theme that's all over this game.
Read More...