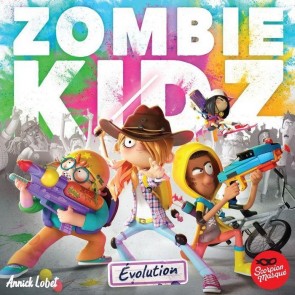 This is a title I expected absolutely nothing from but it has wound up a family favorite that we’ve gotten a lot of play out of. It’s a surprisingly brilliant design that treads some well-worn and frankly worn-out and well over-the-shark turf (co-op, zombie, legacy) but succeeds by reducing all of the above elements to almost a bare minimum in terms of rules and process. This is a campaign game where each session lasts about 15 minutes (or less) and progresses from a fairly simple kids game to a devilishly difficult one with some totally unexpected unlocks.

The game looks great- packed in a small box splattered with colorful, Splatoon-y illustrations, there doesn’t seem to be much to it at first. Just a small two-sided board showing a zombie-besieged school at day and night, a couple of standees, some zombie tiles, and a D6. By the time you’ve made your way through the full campaign – which is tracked by a fun sticker chart where your successes and failures count as well as conditional achievements – you’ll have opened up several envelopes that add new rules, challenges, and abilities. I ain’t spoiling any of them, because they are just too fun to discover on your own. I will state that expectations should be tempered, as there are really only three different types of unlocks- nothing in the envelopes turns it into a completely different game or upends the basic format. 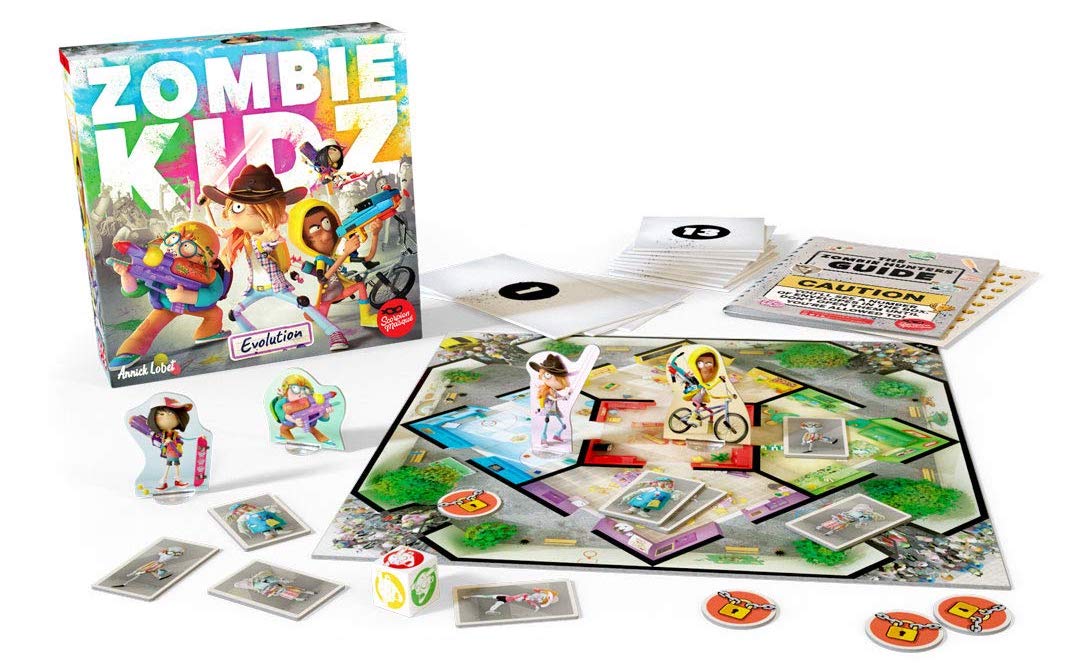 Process is ultra simple. Each turn, you roll the die and place a zombie in that color room. Then you move to an adjacent room and if there are one or two zombies you KO them. If a room has three zombies, it is considered overrun and you can’t move there. The goal is to lock up four gates outside the school, which requires two players to be present. If you have to place a zombie and there are no more to place, it’s game over. That is all there is to it, at first.

In the early games, players learn to coordinate their movements and control the zombies. The unlocks gradually increase the zombies’ difficulty, but special abilities and other advantages for the players balance that out. What happens is a neat ebb and flow of challenge, learning, and mastery until you hit the next plateau. This is such a brilliant format for a kids’ game in particular as it enables them to acclimate to higher levels of play organically.

It can feel pretty lucky- you might have a good rhythm of population control, movement, and lockdowns and then get just completely hammered with die rolls loading up a single room with zombies. And if you don’t have the specific abilities that mitigate that eventuality, you might find yourself saying some rather non-kid game words. But remember, this is a game where a single play is about 15 minutes. And you’ll get to add a sticker to the chart regardless so there is always progression.

The achievements are fun, and just like in video games they can alter how you play as you strive to earn them. Some have specific parameters, such as “finish the game with no zombies in the school” or “win a two player game playing on the 3-4 player side of the board”; they can really mix up the strategies and the way situations are tackled. Others are goals like playing a month after your first game and filling out a sheet encouraging the players to name the characters. My kids jumped right on that, they really enjoyed customizing the game and yes I let them write in the rulebook, as intended.

In the past I’ve largely shrugged at the whole legacy games thing and I’m not really that enthusiastic about most campaign board games these days, preferring to spend that kind of gaming time with a proper RPG. But I’ve totally enjoyed this one, and my kids and I have had a blast marking off the achievements and seeing what comes in the next envelope. The secret sauce is that the legacy and campaign elements are ultra-light and uncomplicated. And when everything is unlocked, you are still left with a full, playable game that has essentially expanded as you’ve played it- and there will likely be some leftover achievements to pursue.

What a wonderful surprise this little game has been in an era of gaming swamped by overproduced rubbish, overwrought rules, and overworked concepts. It’s back-to-basics, cheerful, and delightful in a way that few games really are anymore. The progressive unlocks maintain a sense of surprise while also ramping up both the difficulty and the players’ ability to counter it. I’ve noticed that the box is branded with a “Little Monsters” logo – I’d certainly like to see iEllo put out future titles in this line if that is the intent.

hotseatgames wrote: I like the idea of a short legacy game. I'll bet you could apply some legacy stylings to a game like Hellapagos.

I have this theory that the degree of difficulty on designing a legacy game is like -10,000 if the game is short. There aren't many Gloomhavens out there, it seems like there are a lot of bad 3+ hour evening legacy games