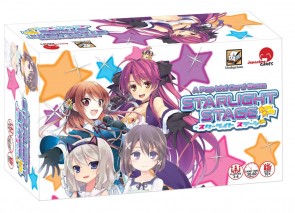 Have you ever dreamed of being a Pop Star, performing in front of millions of screaming fans? Well, too bad, the time for that passed right about the time your complexion cleared up in your teens. But what you can do is play as the talent agent for some would-be divas in Japanime Games' Starlight Stage.

First, you start off with a kid with a show on the Disney Channel and the best auto-tune program that money can buy.... oh, wait, that sounded jaded. You begin the game as a pseudo manager of three “basic” (and not just in the kid's slang term) stars. You start with a Newcomer Actress, Starting Idol, and Newcomer Model. Each “starting” idol has a single icon: One with Music (Idol), One with Acting (Actress) and one with Love (Model...and because it's not a Japanime game without some sort of hearts in it). 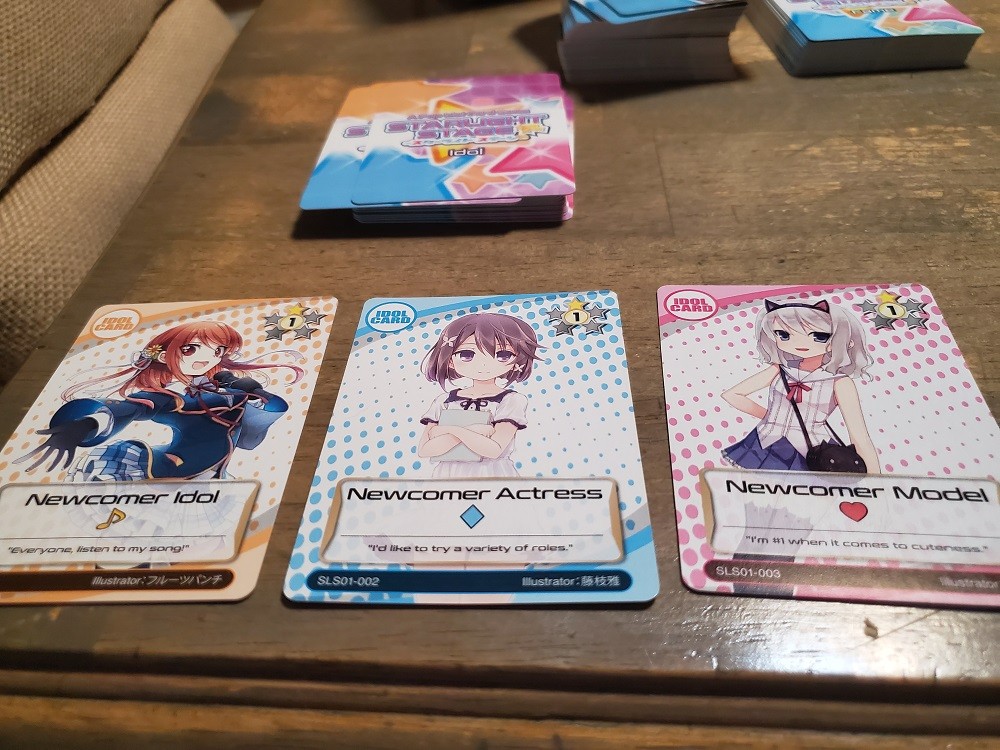 On your turn you can play one of idol cards to either:
1. Take a lesson and acquire a single talent chip of any type (Music Note, Diamond or Heart). You can use these later to purchase cards.
2. Spend icons on the cards to get a Fame Card (the victory points used in the game).
3. Replace the played idol card with a new, upgraded idol card by paying it's cost.
4. You can hire the best ghost songwriting/producing duo and tour the malls of America...no, wait, that would be Starlight 80's. But what you can actually do is use your Idol cards to purchase Events: the Starlight Stage equivalent of the Mall Tour. This adds cards to your deck with various icons/currency that you can use to purchase and upgrade in later rounds. 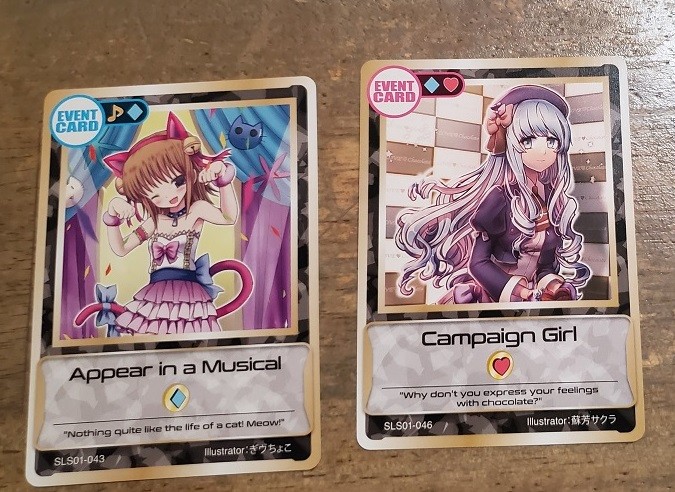 Once everyone uses all of their Idol cards, the round ends and you take all the idol and event cards you have played or bought and put them back in your hand and start anew. It is classic deck building and a tune most of us have heard before.

On their turn, a player will reveal one card from the three basic decks of Idol Cards, Event Cards, and Fame Cards that will then be available for all players to purchase. Since, in some rounds, you will simply be taking a “lesson” to pick up a talent chip, this provides a ever-expanding tableau of things to purchase/strive for. The game ends when the last Fame card is revealed and then all the fame points are totaled to determine the winner. With a new card coming out every round, you never lack for options to spend your “talents” on or for what you might like to “save up” to purchase. 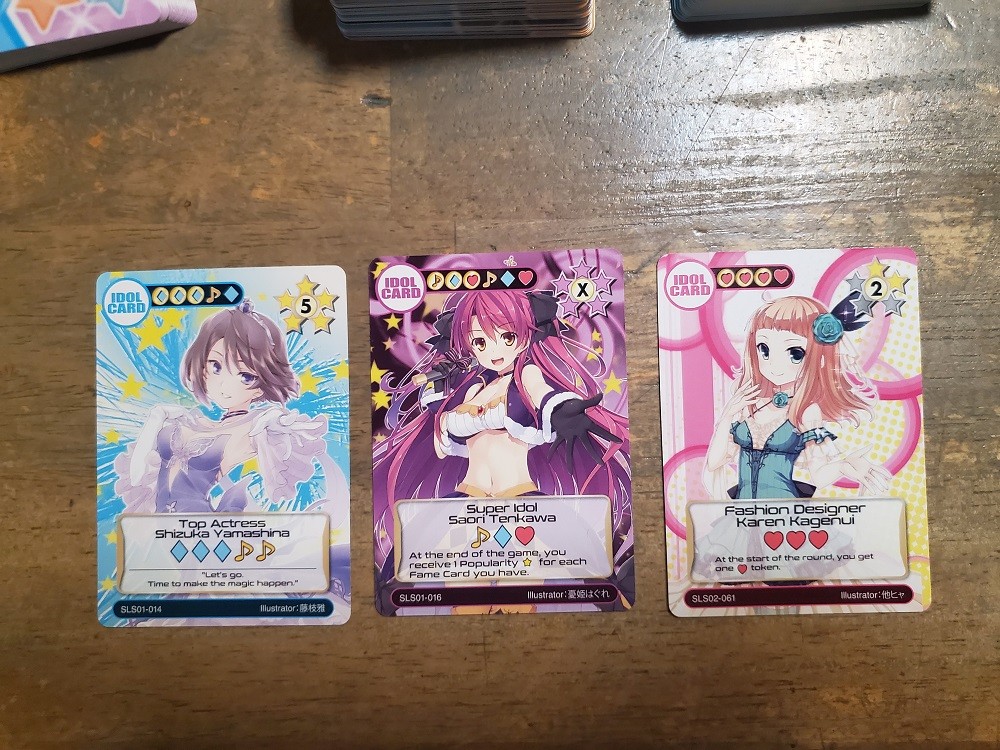 What Starlight Stage does lack is a two-player variant, with three or four players as your only options. (well, five players if you get the expansion).It also lacks that intangible “thing” that makes it a real joy to play. It always seems like it goes on for ten minutes too long and we found ourselves revealing Fame cards more and more often, not in a effort to get better options to score Fame at the end of the game but simply to wrap everything up a little quicker. The tl:dr is Starlight Stage is like that remix of a catchy pop song that just goes on a little too long.

You won't find any male pop stars in Starlight Stage, because everyone knows that boy bands have to be the full complement of Cute Boy, Shy Boy, Bad Boy, and Slightly Nerdy Boy. If they are solo, then it turns into Justin Bieber. Do you want Justin Bieber? Because that how you get Justin Bieber. If you are familiar with Japananime Games' mostly unspoken reputation for having art featured in some their games that could be considered risque, there isn't really anything to “fear” in Starlight Stage. There are a few mild PG “Swimsuit Shots” on the various modeling cards but nothing that is particularly blush worthy. (Or really even of note unless the company's reputation proceeded it to your table). Sorry, Hannah, nothing is a Wrecking Ball at this awards show.

Pulling the strings behind a meteoric rise to stardom is not only the fodder for a Hallmark Movie (I made you, I can break you!), it's the core of Starlight Stage (Never mind, I won't break you, I'll just trade you in for a upgraded diva). It's a little ironic that a game about pop stars just feels like it is missing that “pop” that would take it to the next level.