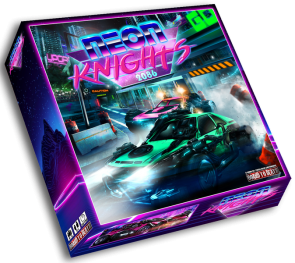 Welcome to the future. The year is 2086 and you can tell it's the 80's again because you are racing in the XRL (eXtreme Racing League) and nothing says cool and edgy like abbreviating Extreme with an “X.” The story is one of slums to stardom, with each player attempting to become a member of the elite Neon Knights racing team. Upgrade your car...Hell, upgrade yourself with implants, pick up some weapons to unleash your inner leather rebel, and maybe you'll be accepted on the right side of the tracks (cue “Don't you forget about me” by Simple Minds).

Neon Knights 2086 supports two to six players. However, I can't really recommend it at two players, it just isn't that fun simply going head to head. Unfortunately, anything above five players comes with a significant amount of downtime between turns, especially in the preparation stages. So, the prime spot is three or four players. I'm not sure if NK2086 is Cyberpunk but it is decidedly Cyber-pink. They certainly went hell bent for leather with the theme. But, just like the actual 80's, the aesthetic grows tiresome. (Insert joke about Nirvana Knights killing the hair metal 2080's here). When a game has tons of cards and required reading of said cards from across the table, the fonts and visuals should be easier to glance at and decipher. Maybe I should play it under a black light? 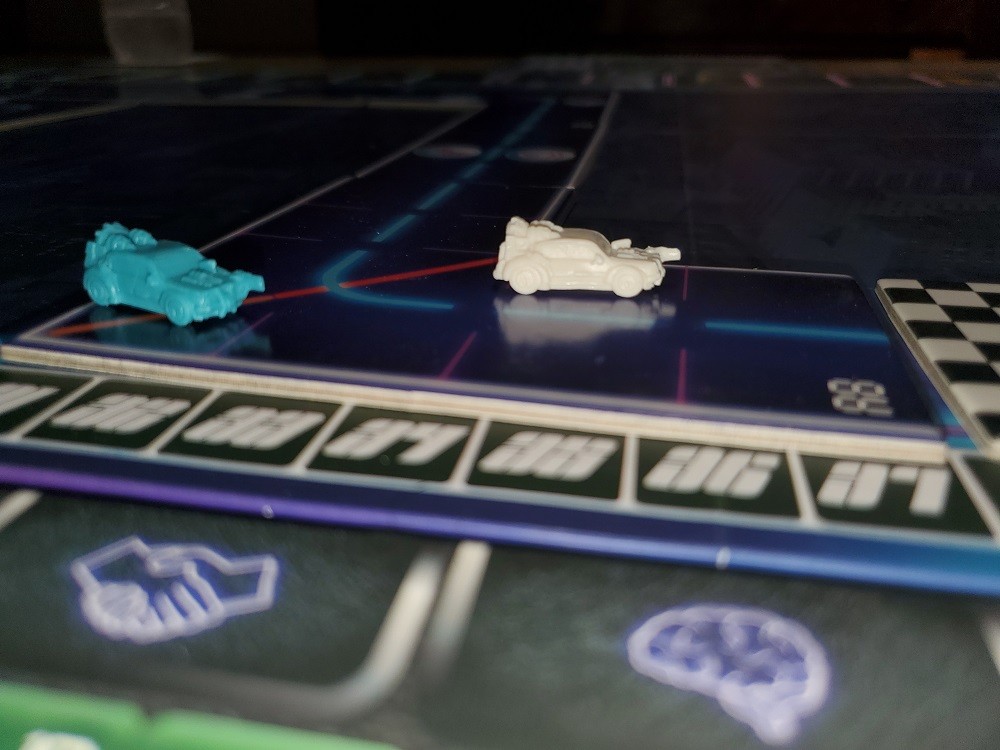 The game centers around prepping your car for the week leading up the the actual driving showdown. Then, you have to decide just how far you want to push your driver and your vehicle as you race around at breakneck speeds. Should you take it slow and steady or will you take the risk? Spoiler alert: Yea, you'll take the risk because the game doesn't penalize you near enough NOT to take the risk. If a player decides to ram it down and put it into the highest gear while heading out on the highway, the smash/crash/damage sides of the dice are equal to the “gain a fan” side of the dice. If you buddy is a turbo loving, RNGeezus and he keeps getting excellent rolls, any of your planning and stratigizing seems for naught. (Granted, this is addressed on BGG with new, more punishing rules for playing with that “friend” that just wants to break the game and watch the world go down in flames.) 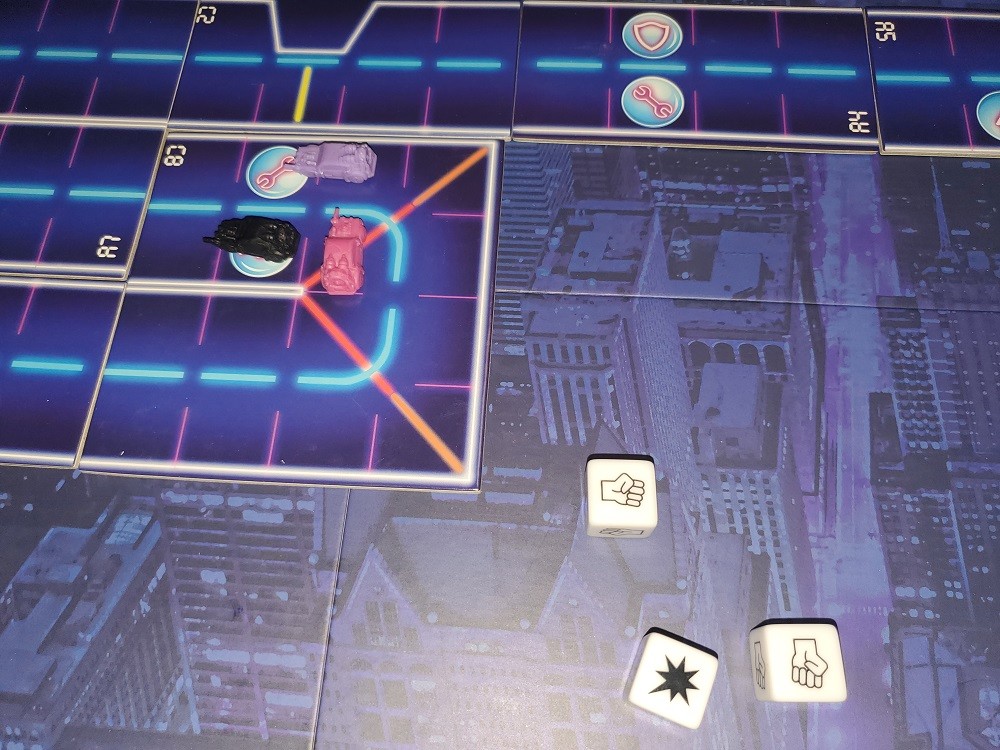 My biggest complaint is probably not the actual luck based portions of the game but how it seems like it always plays too much of a role in the wrong places. See a particular weapon or upgrade you would like to pick up? Maybe you will be lucky enough that it will be available to purchase on your next turn. Or take the Fan Bet cards. Not only can they be race defining, you are chained to the destiny of the draw (doubly so since you only draw a single fan card at a time). This is both functionally frustrating and, in my opinion,directly at odds with the theme. It is as if the fans are defining how you should drive/perform instead of you defining when and how they react during the race. This isn't “Rock hard, Ride free,” it is “Dance for us, monkey!” Also at odds with the theme is that you never build a fan base. If living in the Midwest has taught me anything, it is that people have dedication to their favorite racing drivers. However, in Neon Knights, you reset to five fans after every race. It doesn't matter how well or exhilarating you drove, you always go into the next race with five fans. I know it is just a resource in a board game that could have easily been called a widget, but it just doesn't really jive with me. Kind of like the power-up spaces on the board. It isn't sufficient for you to just to pass over them to “pick up” the power-up, you have to end your turn on that space to recharge a weapon or other device. I kept having visions of my driver stopping completely, unbuckling his harness and stepping out to snag a recharge. 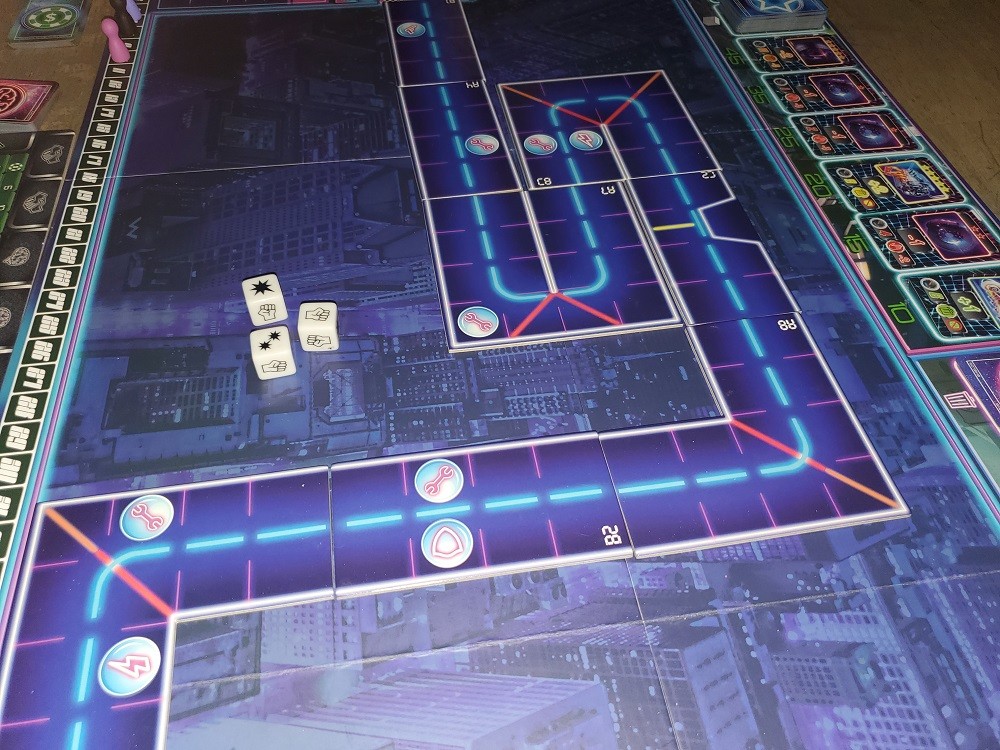 You can definitely feel that passion Luca Vince Caltabiano put into this game. It overflows from every possible point. I will admit, I had a pretty rough time reviewing this title. All the parts are there: Riding on the wind and freewheel burning. An interesting, if somewhat tired, story of new beginnings. The machine man loading up on firepower in an effort to become the next metal messiah. The pacing just feels “off.” Too much prep time getting to the actual race and, with multiple races per game (the recommended number is three), it never feels like it reaches a crescendo. The short and savage races just don't feel like proper payoff for all the preparation. Unfortunately, for me, nothing really broke it from the pack on the bumper to bumper racing game genre.