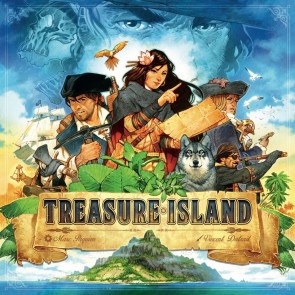 Game Name
Treasure Island
Publisher
Matagot
There Will Be Games

As games scatter from the bag, each winking like rubies in the sunset, there is a gasp of surprise. Every one is still in shrinkwrap. But there's no hesitation in choosing what to play. The title and the luminous box art make Treasure Island a unanimous choice. Our host opens the cupboard and, winking, pulls out five glasses and a bottle of dark rum.

Pulling off the wrap reveals a treasure chest of oddities. There's an actual cardboard chest to assemble, plastic rulers and compass roses, dry wipe markers and most bizarre of all, a pair of compasses. You can feel the hum of curiosity intensify as each comes out. And, in the end, a delight: an actual hidden compartment in the box, with miniatures within and printed treasure beneath.

"Are you sure you know how to play this," my hairiest friend asks, as we go through the setup steps. I assure him I've read the rules online, then pause. The paper rules aren't the same as the clear, well-organised file I saw on screen. They're a mess, but we do our best to stumble through them step by step.

We all get a pirate character and a screen to hide a minimap. Hairiest friend obviously gets to be Long John Silver. More confusion as we discover the board is two-sided, the same map in different colours. When we try and put our miniatures down, the reason becomes clear: it takes ages to find the green starting space on the green map.

Long John marks on his map the location of his treasure and sits back, a smug grin on his hairy face. He then has to reveal one of his hand of clue cards. He chooses one that lets him play with the compasses: "draw a six-mile circle around a pirate where the treasure is not". He measures it with the ruler, fits his dry wipe pen and tries to draw a circle on the shiny board. There's a strange moment of tension, the sheer oddity of defacing a game component. He draws the wobbly circle, the compasses annoyingly loose.

We also start with a district hint each, a dotted line on the map where we know the treasure can't be. My character's special power lets her get two more. I cross them all off in secret on my minimap. Even with a fifth of the map crossed out, pinpointing the treasure seems an impossible task. In response, Long John smiles that infuriating smile. We start to move miniatures over the map and search, drawing lines and circles in our colour to show where we've been and checked.

As the shapes begin to fill out the board, it transforms. It's no longer a board but a treasure map on which we draw and shade and puzzle and plot. We are no longer players but pirate cartographers, needing each other's secret knowledge, yet too suspicious and resentful to ask. And we're more resentful of Long John and his smug grin than anyone.

Whenever we dig, he hands over a little cardboard chest which contains the results. If we find the treasure, there will be a golden token within, otherwise it could be an extra hint, or nothing. The trouble is that the tokens rattle, so we can tell if the chest is empty, draining tension from the moment. I wish the game contained one to bluff with.

For his next hint, Long John lays down two more district hints as public knowledge. He's allowed to lie twice during the game, marking each hint with a face-down token indicating its veracity. I am convinced this is a lie: it allows me, in particular, to rule out too much of the map. But I don't want to waste a precious action on one of my two precious chances to look at a truth token.

As things move on, though, the pace of the game begins to drag. It can take a while to get the right tools, draw the right shapes. Long John is in charge of turn order and sometimes forgets to chivvy players along. An additional source of frustration begins to fester.

The next hint says it's within a mile of an existing search area. I'm convinced I'm in the right area, and this refers to me. Some of the map is impassible terrain. This, with the open movement and some poor choices on my part, leaves me unable to get to the area I'm certain the treasure lies. So I burn another special ability, the once a game chance to "gallop" anywhere on the board to get where I need to be.

Waiting for my next turn to search is an agony of impatience as compasses get fixed and lines get drawn. When it comes I can't wait to slam down the big circular template, trace around it in red and ask for the chest. It comes, rattling with anticipation.

Within, nothing. A useless hint.

After my abject failure, it's now obvious roughly where the treasure must be. But it's the last turn before Long John enters the race. Earlier in the game, we, as a group, imprisoned his miniature in one of the nine towers on the board. Soon he will escape and can win by reaching the treasure, and we've put him scarily close. The pace finally picks up, a thrilling fumble of pens and rulers, and the final pirate turn claims it, buried on the edge of Treasure Island's largest town.

The hints get flipped over. The extra districts that I was sure were a bluff are true. The existing search hint was I was sure was true was a bluff. I should have checked: a lesson for the next game.

At home, I use leftover sprue to make up some fake treasure markers for the chest. I also learn than chalk makers work better than dry wipe ones. But at twenty quid a packet for chunky pens that won't fit in the compasses, I demur to find out for myself.

Later that week, the lure of the treasure proves strong enough to tempt us into another game. With experience behind us, we hope turns turn over quicker. But it still burns slow, the 45-minute playtime on the box looking like one of Long John's bluffs. This time we use the darker, parchment-like side of the board which proves easier to see. The fake treasure markers also prove a boon, each peek in the chest a hooked hand of excitement. And sure enough, one comes over with the bright coins within. Almost found by accident this time, despite extra cunning and experience from hairy Long John.

I used to tempt the kids with pirate games like Merchants and Marauders, but most were too complex. Not only is Treasure Island within their reach, but with its maps and secrets and tension, it's the most pirate-y game of the lot. My youngest dislikes competitive games so we try it as a semi co-op with the two-player rules, my two daughters conspiring against me.

They take to drawing on the components with indecent glee. I'm sure with all my extra years and plays of the game I can work those hints to prove a worthwhile challenge. The pace proves too slow for the youngest, who takes to drawing on the components. But the elder, enchanted by the puzzle, plays on to the finish. It's faster than I imagine: she finds it in a little over half the allotted turns. Long John may sport the legendary name, but he'll have to play very smart indeed to win.

Treasure Island is a bit too big to take on holiday with us. Yet I'm closing this review typing on my phone, sitting on the beach. The tang of salt in the air and the susurrus of waves sliding up the sand as we play. The kids grab shovels, want me to help draw a treasure map on the wet grains. I smile, knowing full well what's kindled their imaginations for this game. So I step into my role as the pirate king once more, thankful for all the cardboard treasure I keep buried in the loft.

August 03, 2019
Rating
4.0
Treasure Island
A unique and very evocative game of cartography, deduction and bluff, which runs a little long and is a little unbalanced to fully realise its impressive promise.
MT
Matt Thrower #1 Reviewer 286 reviews

PeterM replied the topic: #300506 06 Aug 2019 02:26
Hi Matt, you will fnd that Aliexpress has chalk markers at a very reasonable price point (about 1 euro per pen). Can not comment on their quality, since i didn't think of this option before. It's a brilliant solution though because the makers that came with the box do not show enough on the provided map, which detracts from the (otherwise great) game. Thanks for the review and enjoy your vacation.