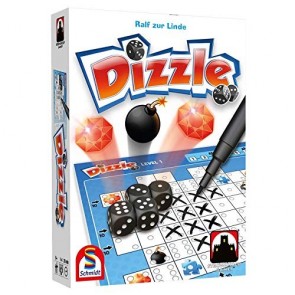 When I was contacted to see if I was interested in reviewing Dizzle, I figured Stronghold had been on a roll (pun intended) with Roll and Write titles (GanzSchonClever and DoppeltssoClever) and, if all else failed, I could make a Snoop Dogg joke about the name (I'm a simple man with simple joys). When it arrived, my inner-evil was excited to see 13 jet black dice, four equally black markers, and some scoring sheets.

The rules seemed a little bit “wordy” at first glance with talk of placing dice, getting closed in, no more “fitting dice”, dropping out and rolling again. Still, one to four players with a game time of about twenty minutes, I figured it couldn't be that complex and, giving it a quick spin, it turned out I was right. A couple of trips around the table and it all becomes clear. The premise is simple: (and even seems mundane) Each player takes a single dice and puts it on their score sheet that matches the number of pips on the dice. On the first turn, you can only place a dice next to an “X” on the sheet. After that, you can only place a dice horizontally or vertically next to an already placed dice. (No orthodontics allowed in this title...sorry, I just can't get used to using Orthogonal without feeling pretentious and smirky)

There are four levels of scoring sheets included, each a bit more complex and with more rules/icons as you progress. I went in expecting the Level One sheets to be a basic (maybe even boring) “dip your toes into Dizzle” experience. I was wrong. Right out of the gate, it was fantastic. There are a couple of “special” spaces on the level one scoring sheets. One is a gem that will get you 3 victory points if you manage to X it out, another is a multi-player shenanigan that is represented by a Bomb. X out this spot and it “explodes” on the other players score sheets, eliminating a scoring space for them and making things just a little bit tighter. But what makes the game really pop is the Closed in, Rolling again and Dropping out rules. 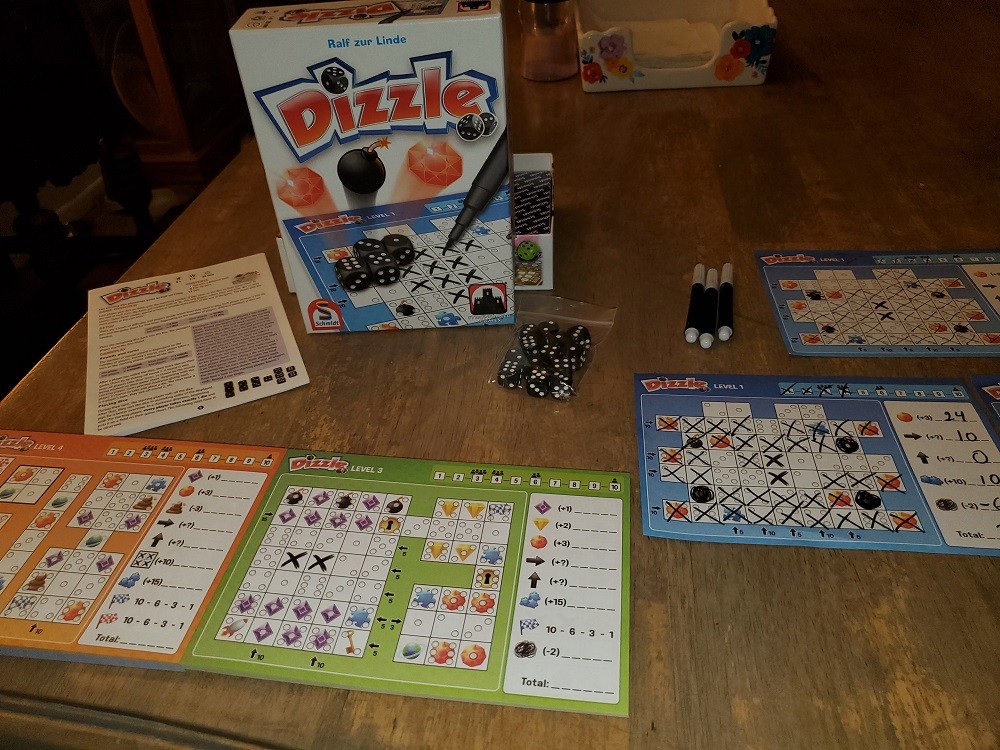 Re-rolling is amazing/horrible. As an example, imagine you have two dice already placed on your sheet but none of the rest of the faces will allow you to legally place a dice. You have a 3,4,5 pip spaces available to you. So, you are thinking you have roughly a 50/50 chance of getting a dice face you can use, so you confidently pick up the remaining four dice and roll. Oops, it turns out you can't place any of the faces that come up. Now you have to return one of the dice you have already placed to the pool. I've seen plenty of times where a player will end up with a single dice scoring for an entire round...and to make it even worse, this allowed the other players to score more dice than they normally would have . If you aren't feeling the luck of the bones, you can “drop out” and not take the peril (or the reward) of rolling again. If you paint yourself into a corner of the score sheet during your turn “Closed in” comes into play. You can “jump” and start a new cluster of dice. It doesn't take long until you realize that doing this on purpose can give you a distinct advantage and open up a plethora of possibilities. 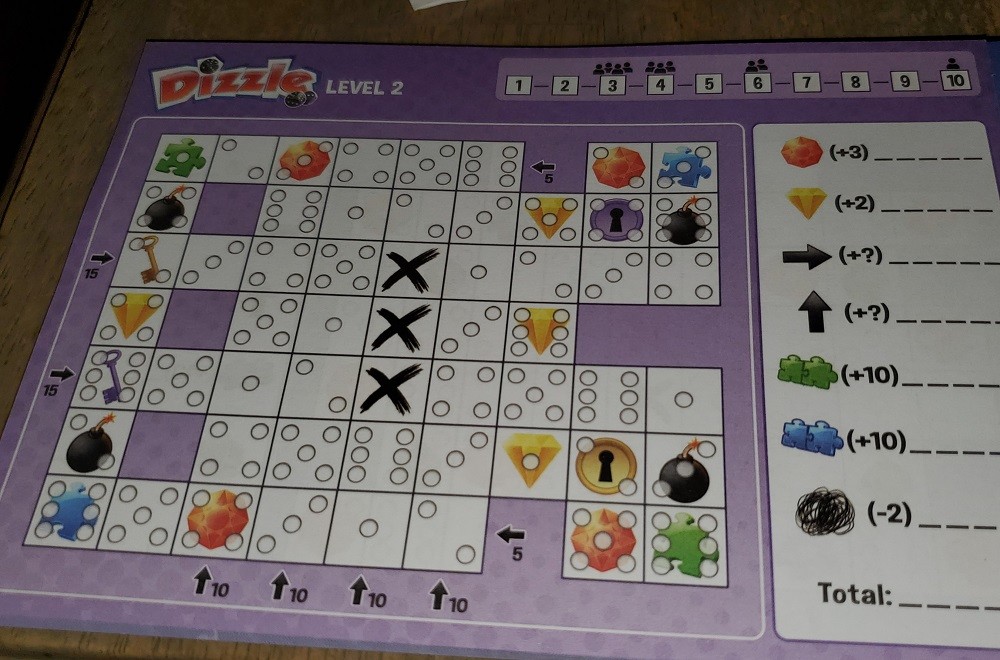 The level two, three and four scoring sheets add more twists to the mix. I can only imagine the conversion between the marketing department and store distributors:

The special fields on the more advanced sheets include locks (and the keys needed to open them), Rockets (and the inaccessible planets you'll need to travel to by using them) and the aforementioned shit (negative points). Each level adds new icons and new twists. A bit more risk for a splash more reward.

The game looks like it could be an app...it probably WILL be an app in the near future. I'm sure it would be a smash hit if they do go that route but I'll stick to my tabletop version. I love the looks and interaction with that takes place between the players. It definitely doesn't feel like the disappointing multi-player solitaire of titles like Sagrada or Railroad Ink. You are always heads up and eyes bright during all points in the game and actions the other players take definitely impact you. 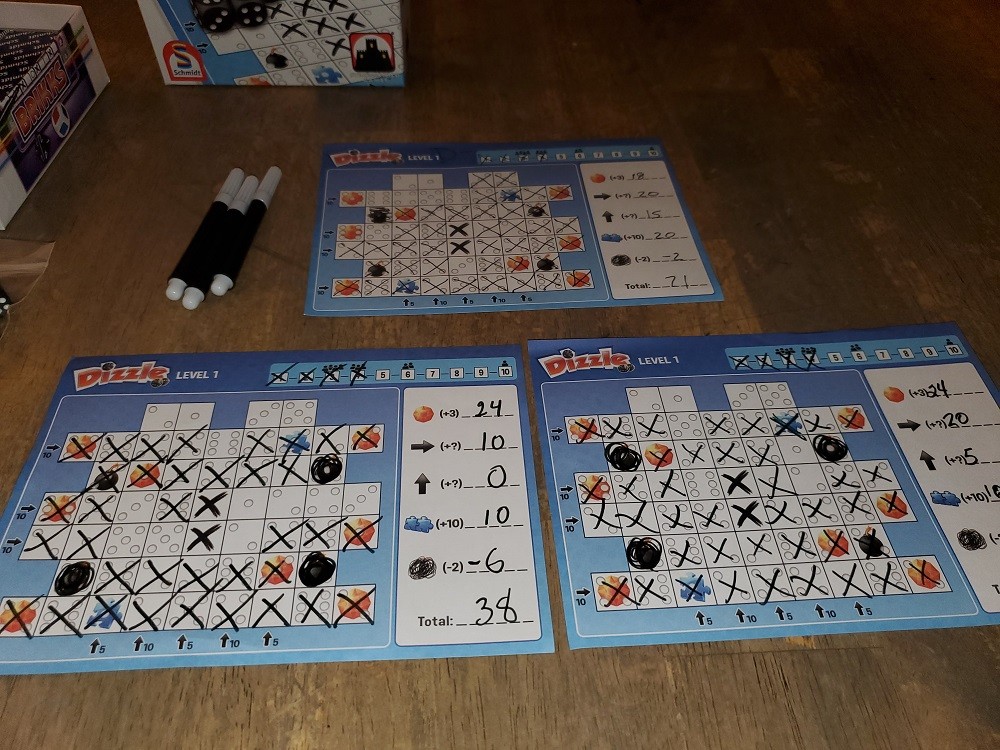 I am in the process of laminating a set of score sheets for each player in Dizzle because, even though the game comes with a hearty stack of them, I fully anticipate playing this game becoming a go-to game with my group. Roland Wright can move over, I'm down with Roland X (Roll and “X”). Nothing quite matches the joy of being bowled over unexpectedly by a title and Dizzle did just that. It's fo' shizzle the surprise hizzle of my year. Wow, two Snoop Dog jokes in one review, the simple joy of this game just keeps on giving.

August 03, 2019
Rating
4.5
Dizzle
This Roll and "X" title excels as a multi-player experience and the player interaction will keep you coming back for more.
W
WadeMonnig Top 10 Reviewer 195 reviews