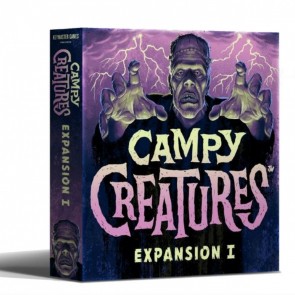 What public domain monster will be in the expansion? It's Cthulhu, right? What? It isn't!?! Someone assemble the angry mob!

Campy Creatures Expansion I isn't a “more stuff” expansion, it is an “alternate stuff” expansion. Everything that you add in requires you to take something from the base game out. The goal remains the same: To capture those meddling mortals. A new rogues gallery of mobs are at your disposal and they feature new powers:

Tarantula (3) The huge arachnid adds Venom to a mortal in the selection pool and suddenly they become worth -3 points per venom token on that mortal. It's like in college when that one asshat would order a pizza and then spit on it so no one else would take any. Yea, not cool, Tarantula...I don't care if you are “immune” to the venom. 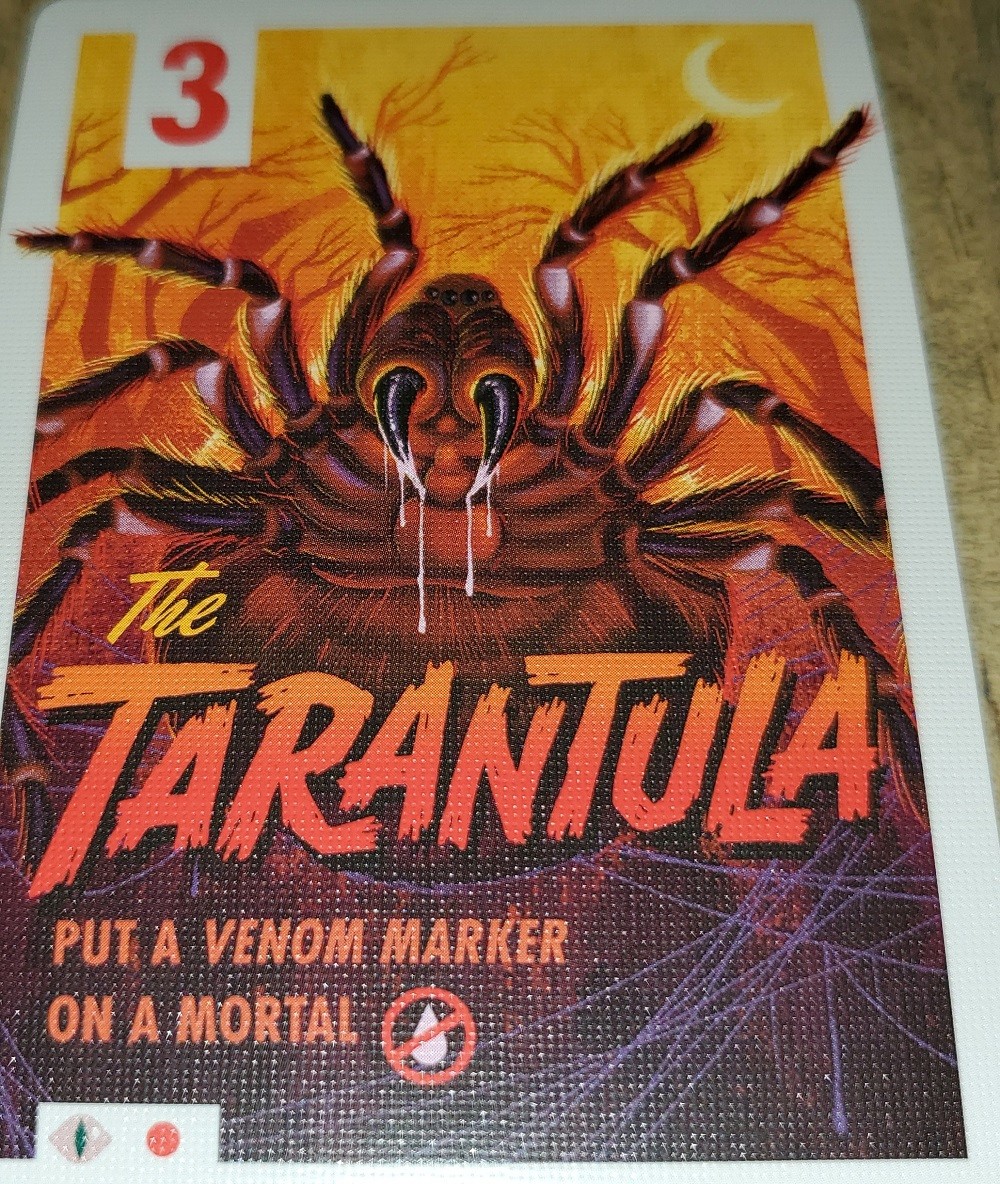 Man Eating Plant (4) Feed me, Seymour. The Man Eating Plant is Campy Creatures tribute to Audrey (II). It Entangles a mortal (stops anyone from taking that mortal as soon as it is revealed). You must have a strong monster (7+) to rip the mortal away from the mean green mother from outer space or another Man Eating Monster (Audrey III???). 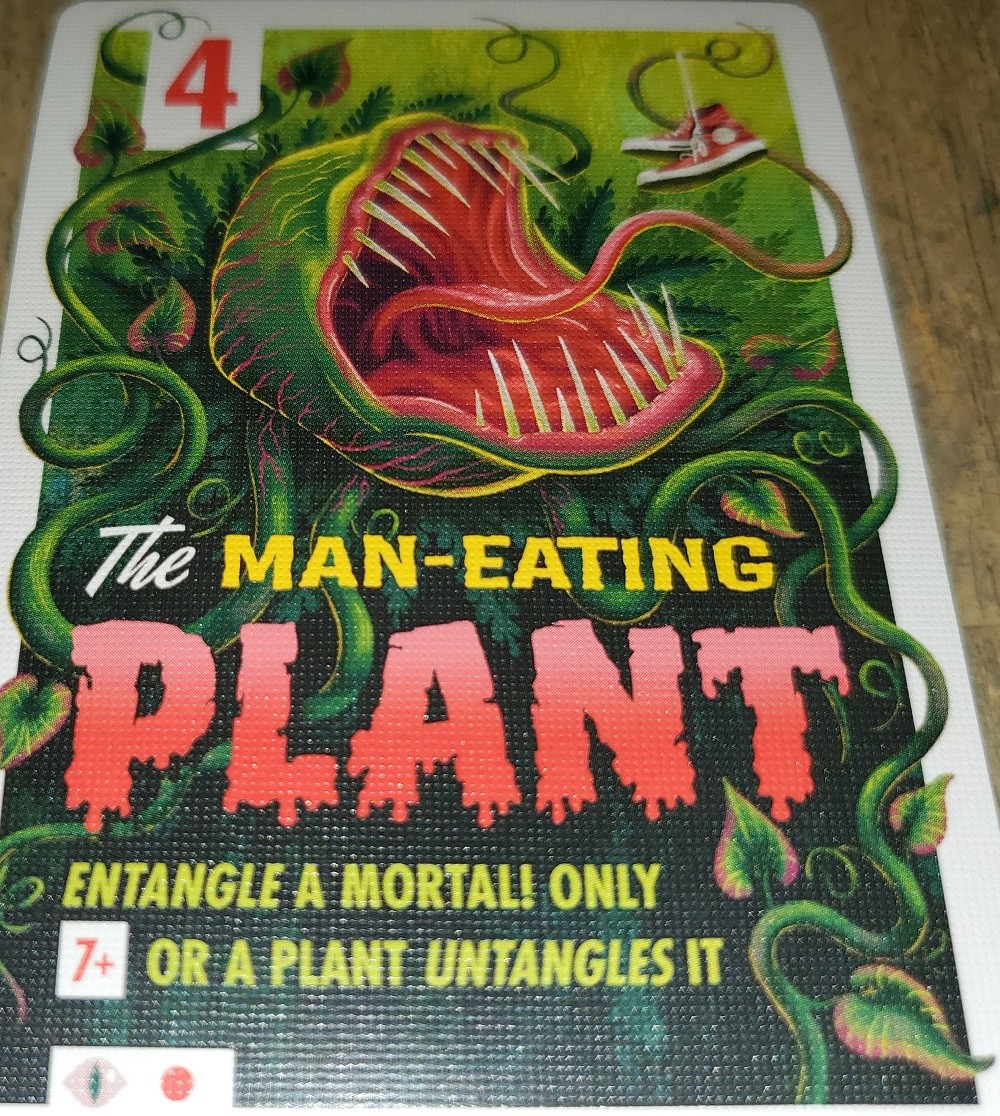 The Rogue Robot (5) When played, you must discard a mortal in play. No if, and or buts. 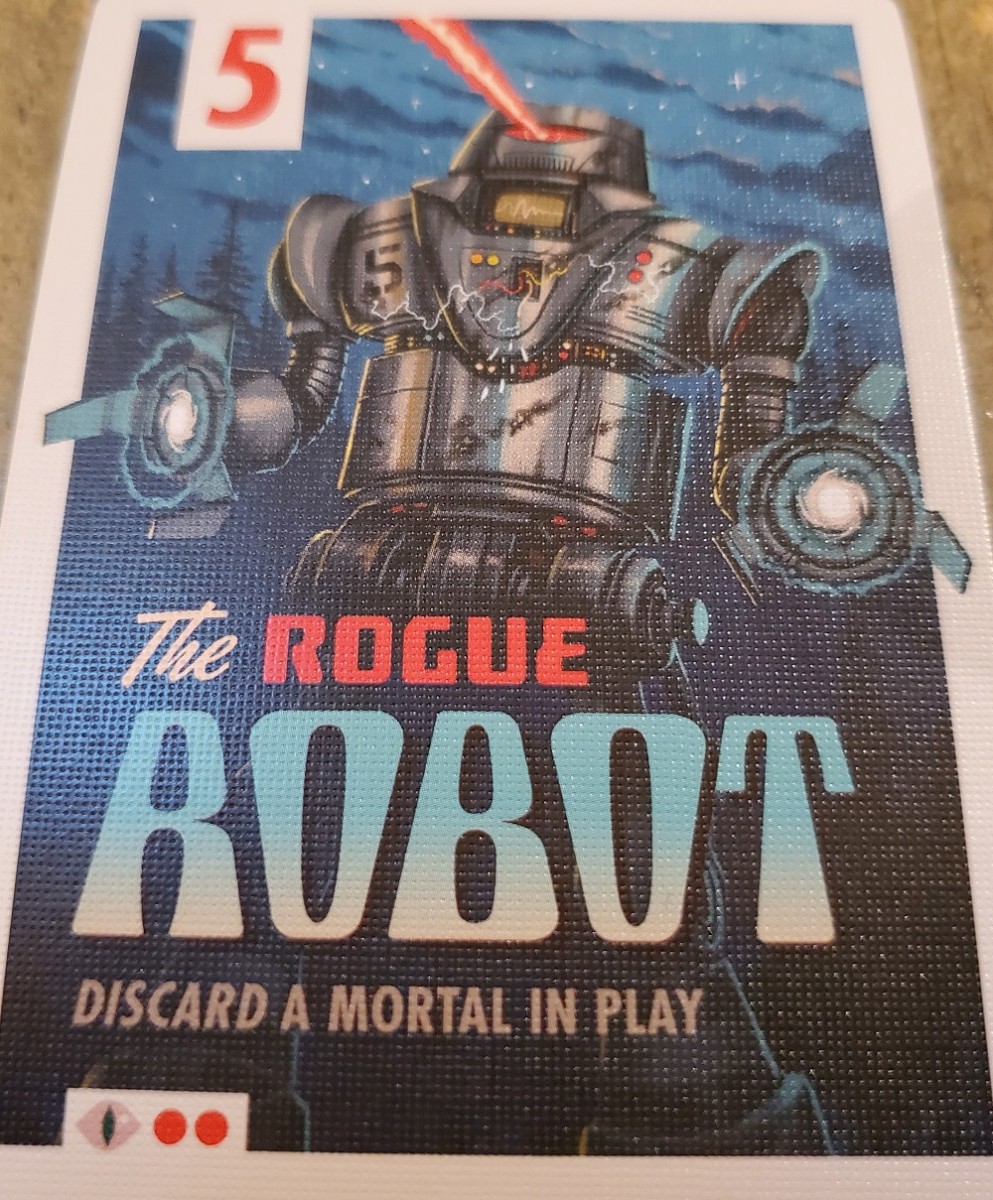 The Monster (6) This is NOT Frankenstein's Monster. It is certainly not just “Frankenstein.” It's an electro-charged, reanimated corpse that will power up the next creature you play by +2. 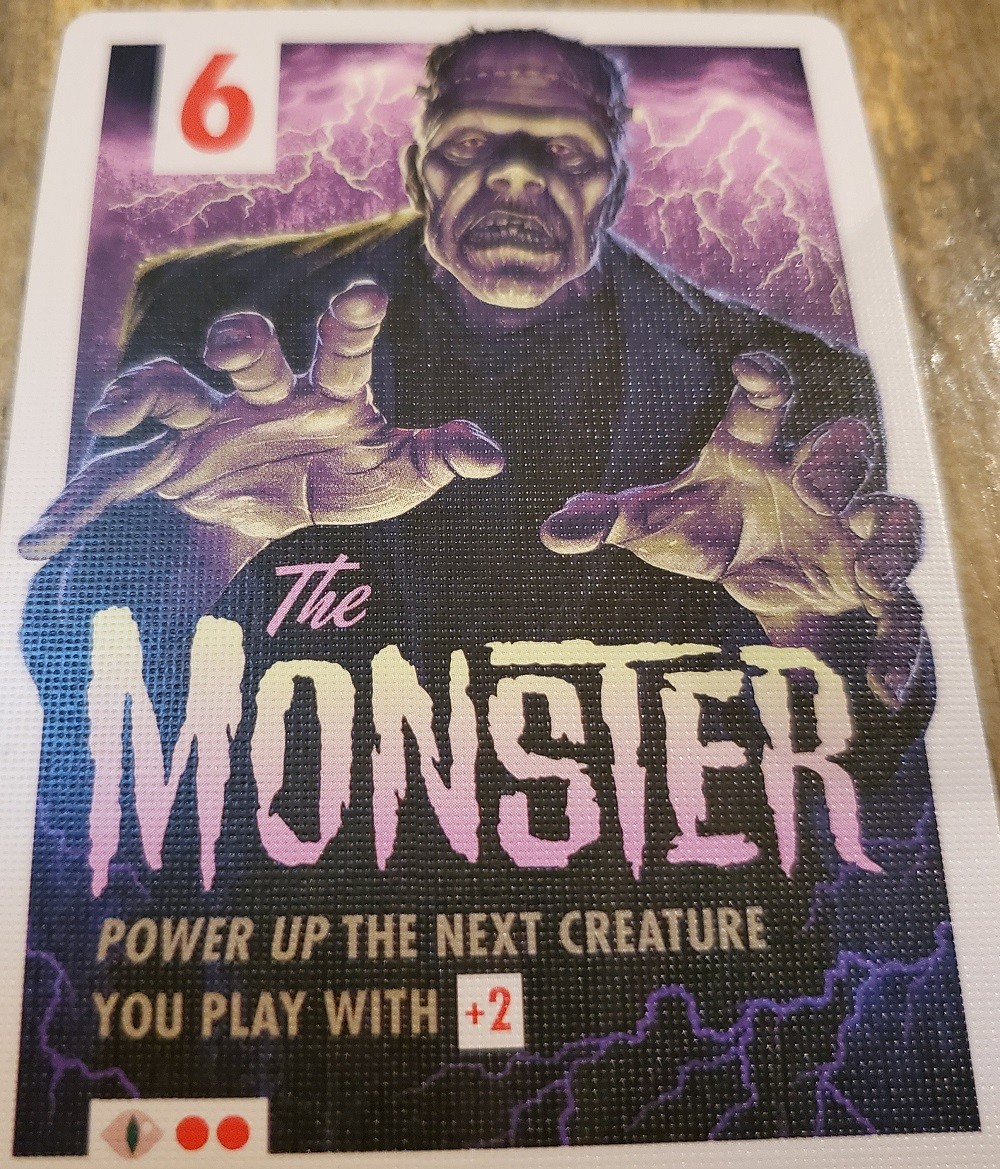 So, how do they play? The Rogue Robot and The Monster do allow you to swap out the non-focused aggression cards (Vampire and Werewolf) that I wasn't particularly fond of in the original game. That freaking Vampire, I just don't like the cut of his jib. But the Rogue Robot is just like he sounds, you can't control him once he has been unleashed and it can come back to bite you in the ass by eliminating the Mortal you would be able to take on your turn if it happens to be the last mortal in play. The Tarantula and The Monster both add a few chits to the game, just to help keep track of their specific powers. Unfortunately, you are pretty much tied to the value on the cards when deciding which monsters to swap in and out. You can't add The Man Eating Plant along with The Invader from the base game. Kind of a bummer, you don't get that all-star monster squad opportunity.

On the Mortal side, you now have Angry Mob and Instigators. As any monster worth his salt knows, pitchforks and torches are not your friend. Moving the Disgruntled Villagers from Player to Player is a thematic addition that adds to the Mortal-capturing strategy of the game.

If you have worn the foam rubber costumes off your copy of Campy Creatures, this expansion is a welcome addition. It's only adds an iota more “complexity” than the original game. It doesn't “complete” the game and it isn't a “required add-on” but if you are a fan of the base game (or the fantastic art), it doesn't disappoint.

August 06, 2019
Rating
3.0
Campy Creatures Expansion I
What public domain monster will be in the expansion? It's Cthulhu, right? What? It isn't!?! Someone assemble the angry mob!
W
WadeMonnig Top 10 Reviewer 195 reviews

ubarose wrote: I really love the art in this game. It's making me really want to try it.

I think we played it? Anyway, I’ve got it, it’s good quick fun.

ubarose wrote: I really love the art in this game. It's making me really want to try it.

I think we played it? Anyway, I’ve got it, it’s good quick fun.

It's coming back to me like a half forgotten dream. Yeah, it was fun. Bring it around again sometime.

RolandHemisphere replied the topic: #300970 20 Aug 2019 20:47
I plan on getting this and the mother game for the Art alone. We have Mission Red Planet as our primary simultaneous action selection game, but the art is too good and I have friends who love a quick game with laughs.
Read More...