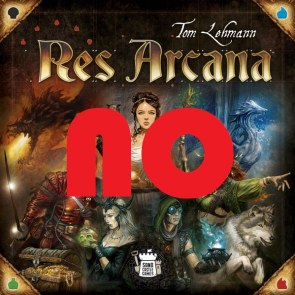 Not playing with a full deck.

"Has everyone else on TWBG's reviewer roster lost their marbles?"
- me after my last game of this.

I tried to like Res Arcana. Really I did. Surely I was missing something, I thought. If virtually every reviewer, many of whom I respect, thinks this game is a contender for best of the year then SURELY there's something to this game.

No, friends. The only gold at the end of this rainbow-colored production chain is of the fool's variety. It may be the most disappointing thing I've played this year, and the only reason that statement is a "may" is because it's only August.

Res Arcana tricks you from the get-go by not teaching you the actual game. It has you deal 8 cards to everyone as a randomized deck, never to be modified. Get a hand of 3, grab a fistful of admittedly nice wooden bits, and you're off to the races! Conversions, ho! Except it's conversions no, because your pile of cards may well not be able to actually chain anything in a cohesive manner. Inevitably someone will pull the "get cheap dragons!" card and no dragons. Someone else will have an amazing life-generating engine and absolutely no way to capitalize on it. The third person will be tearing their hair out as their deck is completly devoid of upkeep resource generators, leaving them in abject poverty. Do not play this game with the default setup. That way madness lies.

Admittedly most other reviewers appear to agree with me on this point. That's why they say the "real" game is in the draft. Assembling your 8 cards manually is by far the better option as it gives you an actual chance at assembling a functional engine. That is, of course, assuming the game's sole random element doesn't kick you square in the teeth. Card draw beyond the freebie you get for passing is vary scarce, meaning you're entirely at the mercy of RNGesus as you pray to not draw your expensive pieces before your resource generating/converting ones. A lesser problem than the randomized deck to be sure, but not a welcome one.

Let's not dwell on that, though. Let's assume everything goes right. This is where we hit upon the worst part of Res Arcana, and where I may lose some of you, but I implore you to stick with me:

Played optimally, there is no reason to complete a game of Res Arcana once the draft is over.

My Century: Spice Road PTSD kicked in hard as I played this and realized that the game was over as soon as the decks were shuffled. We were operating our machines manually, sure, but it was always clear what to do because you have access to so few options at any given moment. Play cards that give you upkeep bonuses. Use that income to convert into pieces that buy expensive tiles/cards. Buy the most compatible pieces. Repeat until someone clears 10 and the game mercifully ends. The "fun" is entirely contained in the first 5 minutes as you cobble together your engine and contemplate its possibilities; from that point on you're just on the rails the randomized sequence lays out for you. And god forbid you attempt to hate draft during the setup, lest you play a 7 card deck with a weird 8th vestigal limb. It strongly reminded me of another Lehmann game I don't care for, Jump Drive, but the major differences are that Jump Drive gives you scads of cards to look at and only takes about 10 minutes. Res Arcana demands at least 30, if not more with players keen on optimizing, and returns nothing but some mental fatigue for your effort.

And so I sit here confused. Is that the game's appeal? That you labored over some cards with recipes on them and puzzled out a way to make points happen? Aren't there about a thousand other games that do this already? Why is this one getting attention? Is it because it's pretty? 51st State is pretty! I mean it's pretty grimy, but that's a kind of pretty! Play that instead! Why are you here? What does this game offer that hasn't been done better in so many places? When I played this with my wife and got trounced 11 to 8, she took no satisfaction in saying that she would have rather we spent our time playing Splendor. And she was right to say so.

I have trouble believing that this game will top anyone's "best of 2019" list. It'll make a few in the lower slots, land some seals of approval from assorted outlets, and that's about it. From there it will fade from the collective consciousness, relegated to a high-ish spot on the BGG rankings due to its early momentum, occassinally being brought up in BGG Geeklists as another example of Tom Lehmann's brilliance by someone who played it twice when it came out and hasn't taken it off the shelf since.

Forget about Res Arcana. We all will eventually.

Gary Sax replied the topic: #300565 08 Aug 2019 09:43
Good review. I think the balance between tactical turn to turn play and strategic engine building can be big in these short engine games---striking any balance at all. Which is why I tend to play longer engine games, I guess... Wingspan is taking the opposite tack, making the construction and operation of your engine the whole game through random tableau supply which also doesn't totally work for me. But there again, longer game.