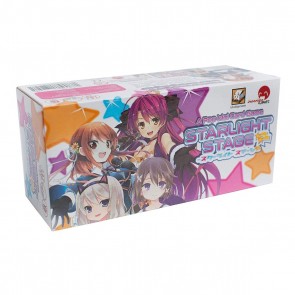 Like it or not, Japanese Idol culture is stealthily sneaking into pop culture like Solid Snake dressed in a blue sequinned tutu. Now it's board games' turn.

Like it or not, Japanese Idol culture is stealthily sneaking into pop culture like Solid Snake dressed in a blue sequinned tutu. We’ve seen anime succumb to its wiles with Love Live! and Zombieland Saga, as well as video games in Tokyo Mirage Sessions. It’s now board game’s turn, with the pop idol card game Starlight Stage.

Now before I begin this review, we need to talk about the art. For three reasons.

First, it’s anime art – it’s really well-done anime art, and those who enjoy anime are in for a treat. However, this is a deal breaker for many. Second, the art represents young girls or lolis. While lolis are somewhat of an anime culture phenomenon, this depiction of young girls will be a deal breaker for many more. Third, a couple of cards are borderline ecchi. If I decode that for my non-anime loving fans means; it means they’re pretty sexy, and something you shouldn’t show your grandma. 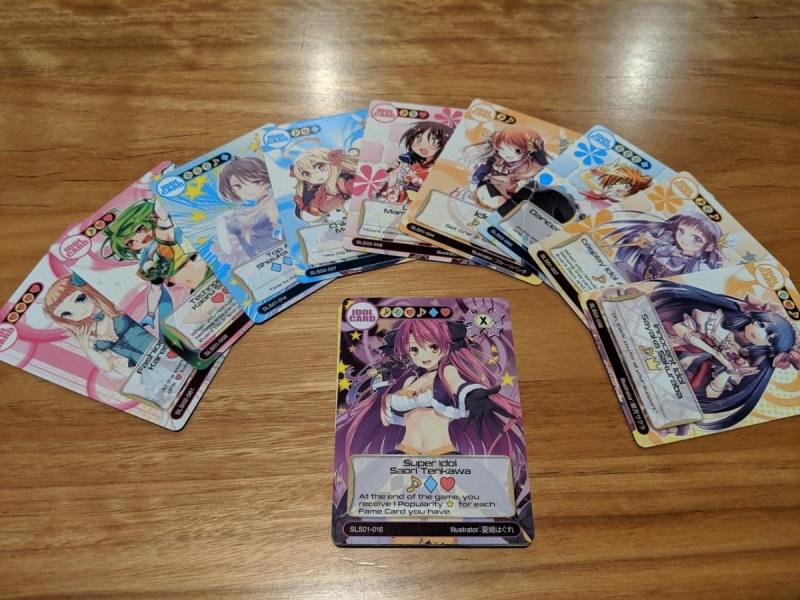 This gives you an idea of what this card gameis. A niche game, within a niche hobby.

And I love the boldness of it.

Any other board game publisher wouldn’t allow this because in order to maximise their profits they need the game to appeal to as many gamers as possible. Japanime Games on the other hand knows who their fans are, what their fans want, and gives it to them with aplomb.

But how does it play?

In Starlight Stage, you’re running a talent agency grooming young girls’ careers in the hopes they make the big time in a cutthroat industry. As the bigger their star, the more popularity your agency earns. At the end of the game, you win if your agency has the most popularity.

Your starting hand is three young impressionable ladies looking to follow their dreams. On your turn, you’ll exhaust one or more of these girls to use their resources and send them to an event to earn more resources, make them famous for popularity, or reinvent their image and make them better, more powerful idols. 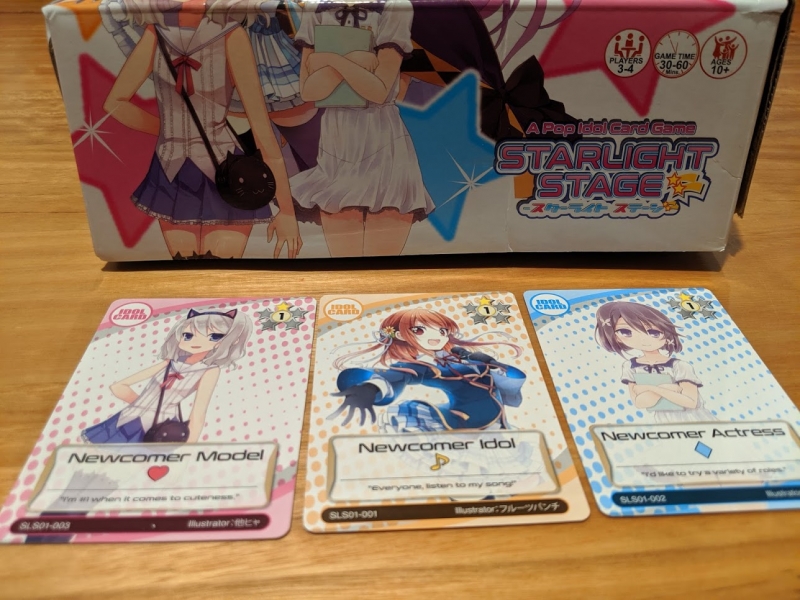 Starting hand… Reminds me of Pokemon.

This makes a satisfying gameplay loop. Where reinventing your idols, and gaining fame cards, requires you to strategical buy events. It’s never a one-to-one trade off and figuring out how to maximise the efficiency of your girl’s work is a cute little puzzle.

The payoff is fantastic as well, because you’re giving up your idol card to reinvent them, it fills you with pride. Partly because difficult to do, but more because your young girl has grown from talentless idol into a pro. All her hard work was worth it. It’s a simple mechanic but integrates so well with the theme.

As part of each turn, you must add a card to the market. Meaning the longer the game goes, the more you can choose from. Figuring out what to buy is where you spend the majority of your time thinking. Unfortunately, most of these cards do the same thing, or have no ongoing effect on game play. Making the decision space wide, but shallow, like a kiddie pool.

This would be fine if the game was shorter, but as it stands Starlight Stage feels more like a medley from a band with only one good song. As while it’s possible to have more than three girls, it’s rare. So, at max you’ll be performing the upgrade cycle three, maybe four times. Then you’ll be cleaning up fame cards for popularity, at which point it feels like you’re just going through the motions. It’s this part that takes much longer than it should. As without the feeling of getting better and improving, the excitement from the game all but evaporates. 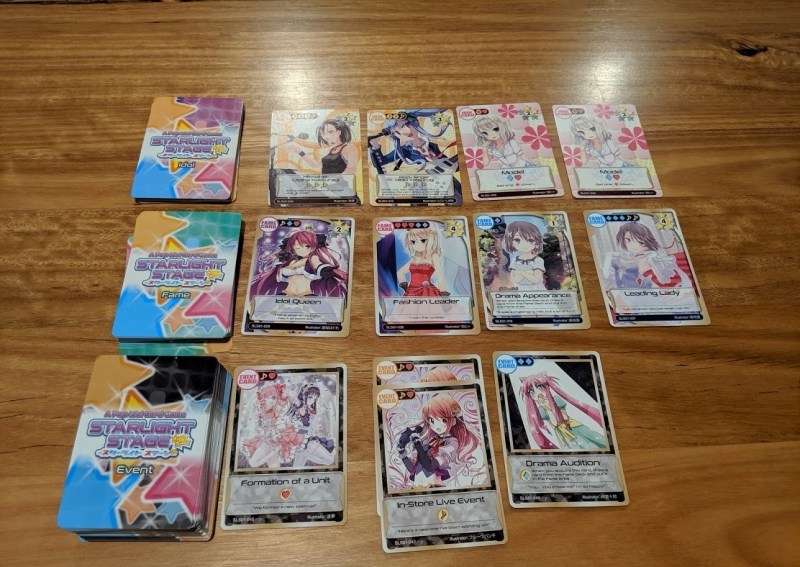 Aside from the core gameplay, and this is a first for me, I must call the balance of the game into question.

This may be because I only played it a handful of times, but there are a couple of cards that seem to shift the game in one player’s direction, without counter play. One example is Super Idol Saori who grants 1 popularity point per fame card you buy. Given there’s 31 fame cards, divided equally between 4 players – that’s almost 8 points for the card. The highest in the game. At 3 players you’re looking at 10 points. Considering end game scores fall between the 20-40 points, a quarter of that could be made up in one card that costs only slightly more than others.

There are also cards within the event deck which allow you to recruit new idols. Effectively giving you an extra turn each round. You’re also not limited to one, so depending on when these appear, you could theoretically have three extra turns per round. Think of all the extra events you could attend!

However, Starlight Stage isn’t a game that thrives on being competitive, so while these concerns exist, they’re not so relevant. This is a gateway game for an extremely niche market of people. And I think it succeeds at what it wants to do. There’s more gameplay in here than expected. If you love the artwork, then more than likely you’ll have a good time. Even if it didn’t meet the expectations of this board game nerd.

This game was provided for free by Japanime games.