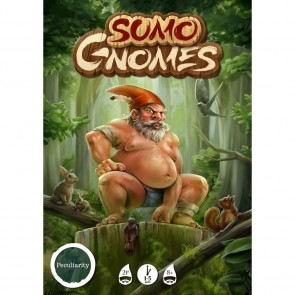 “If you go down to the woods today John you are in for a big surprise!”

“ Yes that’s right Bob. It’s time to show off the latest sport that is driving the local populace wild”

“By local populace you mean the deer and squirrels John?”

“The creepy statues in gardens John?”

“No Bob real, live genuine Gnomes. Ready to do Battle in the Sumo Arena!!

“Put your top back on John”

“I will not Bob. This is how our brave competitors will dress when they enter that hallowed circle. As they take on the challenge. As they rise to the occasion. To become a Sumo Gnome!”

“I need a better job”

It was our pleasure to review the rather good Summoner’s Isle last year from new outfit Peculiarity games, a one man publishing house that is the brain child of Robbie Munn. Summoner’s Isle was a compact game of mythical creatures and tight battles, which ran a little long for our tastes. Despite that I was a big fan of Robbie and his design principles and looked forward to see what he would do next.

Some designers start small and go bigger with the subsequent projects, but in Robbie’s case he has started small and gone even smaller. Really small. I mean look at this thing: 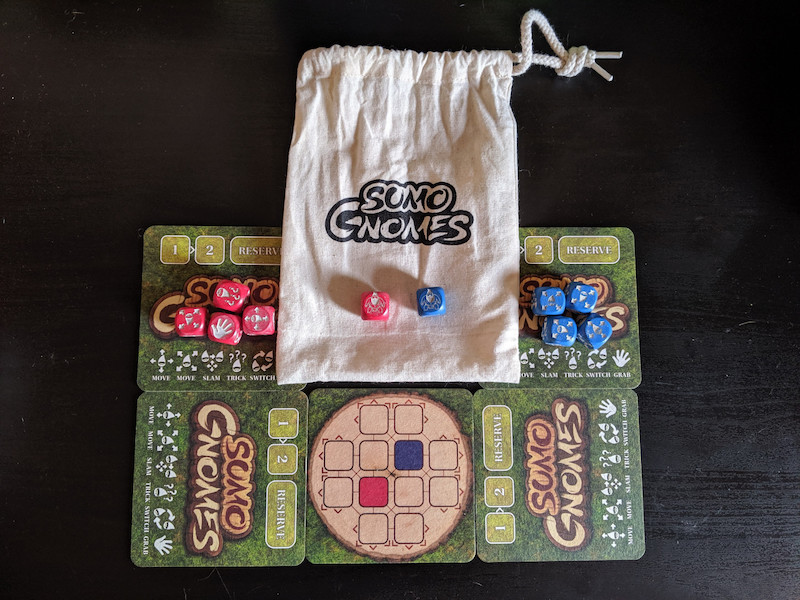 Compact is the word

This is a game so small that it can be contained by 3 beer mats, it comes with some spares which are presumably to actually put beer on. Don’t let the diminutive size fool you. This is a game of control, anticipation and rolling with the punches (Do you even punch each other in Sumo?).

The gnomes face each other across the windswept stump. There is a moment of silence. The flag drops. The dice clatter to the ground and your gnomes begin their dance. 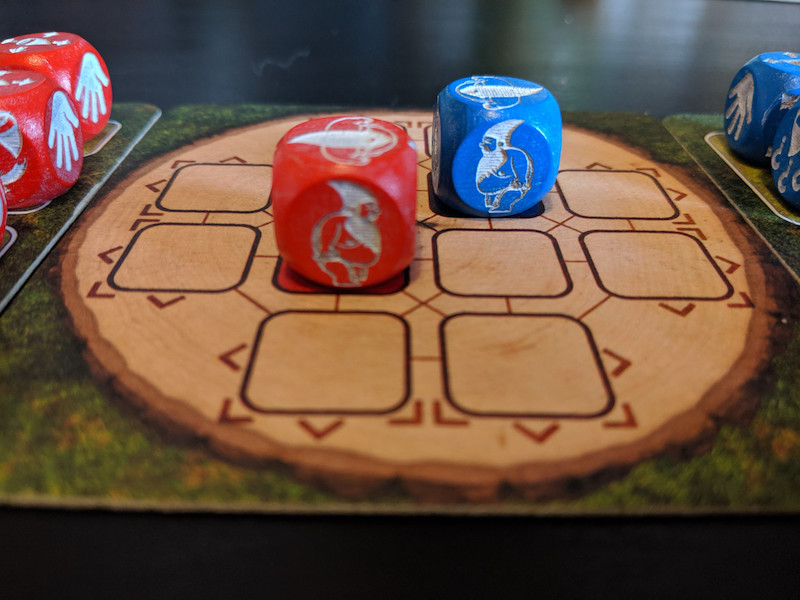 Don’t look at the bottom of the dice, that’s rude

Your first turn is pregnant with possibilities, all 4 dice being at your disposal: grab your opponent, maneuver around to setup the shove, slam them around the stump and push them closer to the edge. The winner will stand victorious when their opponent has been summarily thrown from this woodland arena.

Choosing 2 of these 4 dice, you move your fighter round the field, looking for the position to set up the final move. The other 2 dice are reserved, locked into position. Guaranteeing you results, narrowing your choices. Your opponent responds in kind, choosing 2 dice and locking 2 and now this show can really get on the road. Every turn you will roll for two new choices and then see what you can achieve with the dice you locked in and these 2 new possibilities. Did you anticipate correctly? Are you in a dire position and need to swiftly get out of a dangerous situation?

This could be a straightforward enough affair if it weren’t for the Grab. If your gnome is unfortunate enough to be grappled by their opponent then a lot of the dice gain more threatening abilities. A simple move becomes a slam, allowing your opponent to shove you and follow up into the space behind you. A switch instead of swapping places, becomes a spin that sees you pivoting around your opponent, teetering on the edge as you try and regain your balance long enough to shove your way out. 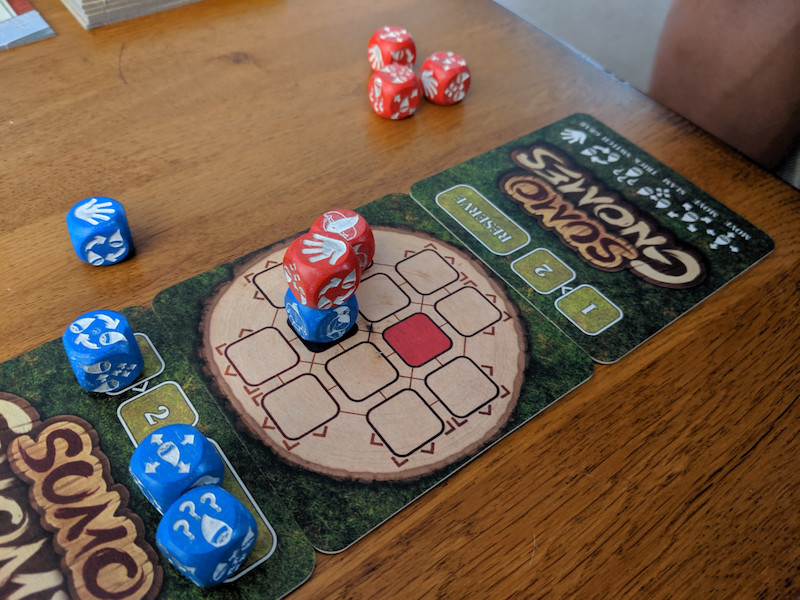 My gnome has been grabbed! Now my opponent can throw them around with the correct results

Each round of Sumo Gnomes is a short, brutal affair. Sure the dice can occasionally not go your way, but more often than not you lose because you have been outmaneuvered, out thought and out sumoed (totally a word, I looked it up, trust me). Even if the dice do bring you down, what does it matter? The game took minutes to play and you can just go again. With short games like this the luck factor has less impact, and will doubtless even out over multiple rounds.

We have a winner!

I’ve played Sumo Gnomes in multiple iterations and I’ve liked it more each time. The locking horns of fixing results for a future round and rolling with the punches of your opponent’s turn is a compelling puzzle and a dynamic game. There are moments of elation as your plan comes together, shouts of frustration as it all falls apart and those are the times that make a game great. When it delivers an emotional sucker punch.

This is a confident design with a clear goal that it achieves easily and then ices the cake just to be sure. There is no sign of the difficult second album here and Robbie ran a great campaign with Summoner’s Isle. I thoroughly recommend Sumo Gnomes as a fun, compact tactical game you can teach easily and play quickly. I have no doubt that it will be in many a backpack after the Kickstarter campaign hits in September.

A copy of Sumo Gnomes was provided by Peculiarity for this article. Final components may vary from those seen in pictures in the piece.

Re: punching. Strikes with a closed fist are a foul, but you can strike with open palm, forearm, elbow, or basically anything else. Just can’t attack the eyes, hair, or groin.

Legomancer wrote: ok but that cover