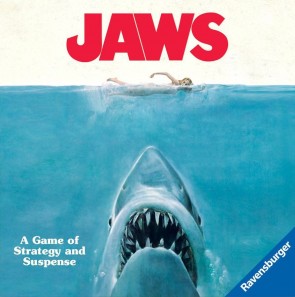 While you were distracted by the latest crowdfunding ballyhoo, the storied Ravensburger brand teamed up with the design firm Prospero Hall and out of nowhere, started making some of the best games on the market today. They are putting out supremely accessible, hobby-informed designs with great licenses and when the “worst” they’ve done so far is a great Jurassic Park game, you know they’re doing something right. Last year’s Villainous was one of the top games of 2018, and this year they’ve topped that brilliant design with a stunning piece based on the first summer blockbuster – Steven Spielberg’s Jaws.

From its 1970s-inspired graphic design sense to its careful attention to the narrative beats of the beach-based horror film, Jaws pulls off that neat stunt of giving its audience exactly what they want from a game with this particular setting. It’s suspenseful, dramatic, and it all ends with three desperate guys on a boat getting torn apart by a monster shark. Of course, there’s plenty of hapless swimmers on the menu before the grand finale and throughout the game there is always the option to do your best Quint impression.

But more importantly, like the Spielberg film, the Jaws Board Game is audacious. This design really took me by surprise beyond its meticulous gamic reconstruction of the film’s story – it’s one of the more forward-thinking and innovative designs you can find on a Target shelf. It leverages a two-act structure to tell the Jaws story, and in doing so it sets aside space for what are essentially two family-weight all-against-one games centered around two different hidden movement mechanisms. Which are, of course, perfect to capture the uncertainty of where the shark is and where it will appear next.

In the first phase which takes place on and around Amity Island circa the 4th of July, 1975, the Jaws player records her three actions and the only information supplied to the Quint, Hooper, and Brody players is how many swimmers were eaten, where they were, and if any motion sensors were set off. The humans have to try to attach two barrels to Jaws while also scoping out and strategically closing beaches. Hooper tools around the island in his speedboat, using his fish finder and ferrying barrels to Quint. Brody handles all of the dry land police work, such as fetching barrels and taking them to the docks. And Quint fires barrels into sea spaces looking for the elusive shark.

But there are twists to it all, such as some secret action cards that the Jaws player can use to obfuscate her moves. Double-backs, avoiding dining at the most crowded beaches, and fake-outs can make the shark tough to catch, and the more it eats the stronger it is in the second act, which completely changes the scale and situation of the game. Act 2 finds the would-be shark hunters aboard Quint’s boat, The Orca in a terrifying face-to-face battle with Jaws. 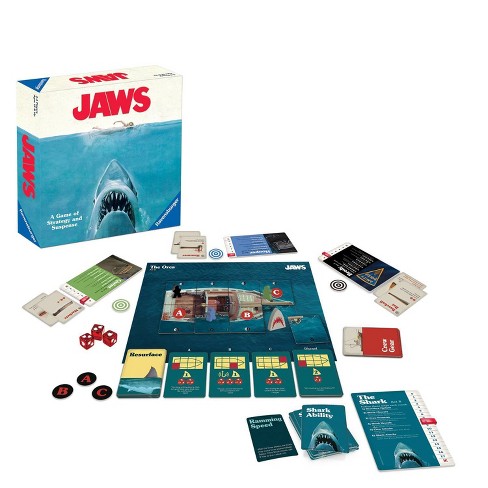 It’s an entirely separate set of mechanisms and concepts, yet functioning at about the same relative level of rules density. The Orca is composed of eight tiles, and on each turn the men move about the boat and try to anticipate where Jaws will surface based on a set of three possible locations. Jaws picks one secretly, reveals, and there is either ranged or melee combat possible based on the equipment cards available. There’s a nice level of detail, with weapons that can be attached to the shark, ammo concerns, and the possibility (nay, likelihood) that someone is going to end up in the water with the shark. I love that Jaws can attack the people, whittling their HP down, or she can go right for the boat and rip it to pieces. As it is gradually destroyed, the humans have less options and that can lead to a tense endgame. It’s absolutely thrilling to end a game with Brody in the water with the shark and an all-or-nothing die roll to kill it with a hammer.

There are some very well done, subtle elements in this phase that give it somewhat more depth than the first act. Each of the Jaws movement cards offer a number of combat dice, damage absorption, or the ability to lose an attached weapon. So the humans might try to anticipate Jaws’ movement based on the incentives available and the relative situation. And the Jaws player may use that anticipation to spring a toothsome surprise.

The two halves definitely make a whole, and although it is suggested in the rulebook that you can play one or the other act as a minigame, I can’t imagine doing so when the whole narrative arc of this game runs about 45 minutes tops. This is starkly efficient, focused game design at its finest – it’s all killer, no filler without any room for expansions, add-ons, or options. I’ve seen some concern that one half or the other is somehow less compelling or less replayable, but in my 10+ games (it’s been really popular at our house) I’ve yet to grow tired of it or feel that it is getting stale.

The Jaws Board Game is, at my stage of interest in board gaming, exactly the kind of design I value the most. It’s succinct, direct, and offers plenty of theme, setting, and narrative. It feels carefully tested, labored over, and refined in a way that many of the titles regarded among the best that the hobby supposedly has to offer simply are not. Like the Disney villains of last year’s hit or Jurassic Park, the Jaws setting is outrageously appealing and fresh and unexpected. Look, I’m as surprised as you might be, but this is the best game of 2019 so far and I’d be shocked if something better came along- this is a mainstream masterpiece, and given time it could be this generation’s Survive.

Dr. Mabuse replied the topic: #300976 21 Aug 2019 03:14
Believe the hype, this is a SOLID title! Few are the game titles that have been able to successfully pull off two completely different game styles and mechanisms within the same game and yet keep it "The Downfall of Pompeii" immediately comes to mind. What an absolute joy to play.

Vysetron replied the topic: #300983 21 Aug 2019 08:31
People need to stop being surprised by Prospero Hall. Over the last couple years they've produced loads of solid games with almost alarming consistency. I can't name another designer with so few failures to their name offhand, much less a design team.

During the first half of Vampyre, players move around a hex map depicting Transylvania. There random encounter charts based on terrain type, featuring attacks by wolves, bears, vampires, etc, and then there is a short stack of encounter chits at each town. Each time a player visits a town, they take the top chit from that town's stack and resolve it. The chits are usually items or coffins, with a few surprise attacks in the mix. You smash a coffin, and the first player to smash three coffins gets to choose an item that wasn't already found.

The second half of Vampyre is played on the flip side of the map, which depicts a slightly abstracted map of Castle Dracula. There are traps and monsters in every room, and you play until all players receive three bites or somebody manages to kill Dracula. There is a clock with tokens to mark the current hour and day/night. Each player advances the clock one hour at the start of his turn. At midnight, the traps re-set themselves and all the supernatural monsters re-spawn.
Read More...