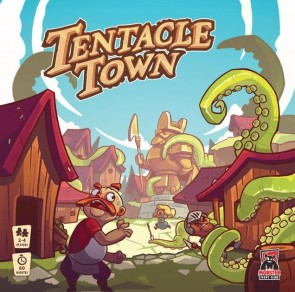 Disclaimer - Aaron Dill, one of the designers of Tentacle Town, reached out to me directly and offered an early, preview copy of the game ahead of the launch of their Kickstater, which is going live today. I agreed, as I have especially enjoyed Mr. Dill’s games and I feel confident in Monster Fight Club’s ability to produce and deliver a quality title. The copy I reviewed was clearly marked as a reviewer copy, and may be subject to minor physical or cosmetic changes as it enters full production.  I accepted no money, compensation, or special consideration for this advance review. ThereWillBe.Games never accepts payment for its reviews or other editorial content.

Taking a look at the CVs of designers Aaron Dill and Jon Kovaleski, their new game Tentacle Town is the outlier. These gentlemen made their names with a string of outstanding titles produced at Gale Force Nine, beginning with Spartacus and continuing on through a couple of great Firefly games and the monumental Star Trek: Ascendancy. Along the way they also brought us the underrated Sons of Anarchy and Homeland games. Now, at new imprint Monster Fight Club, they are shaking off the TV licenses and complex, multifaceted mechanisms used to express specific settings, characters and situations and applying their design smarts to a game that feels something like a vintage Eurogame spiked with a little touch of take-that action.

It’s technically a worker placement game, but it isn’t one of those heads-down, chin-scratchers that sours many on the genre. Sure, there’s resource conversions galore but how many of these kinds of games give you the option to either flip a harpoon token at a plastic tentacle or spin a freaking spinnerto fling a sharp, poky thing squidward?  A spinner.  Quite possibly the most outre game component this side of a pop-a-matic bubble.

Needless to say, I am really enjoying Tentacle Town and that spinner is one of the reasons – I love spinners and I’ve been known to call rondels  “spinners with the fun removed”. And that spinner, with its little harpoon-shaped pointer, really captures the spirit of this game. The setting is super silly, couched in a fiction that finds the titular town under siege by giant tentacles, which actually don’t seem to be attached to any kind of aquatic animal. The goal is to find fame and fortune against this backdrop, which you will achieve by recruiting workers into three different districts to do the work of gathering resources, making harpoons, hunting tentacles, and making delicious sushi out of them for you. The goal is to earn Fame points and be declared the mayor of Tentacle Town.

There are some very cool, surprising design touches that give this goofy game some unexpected depth. It’s not Scythe, but there’s some real presumably very chewy and slightly upsetting meat here. I especially like that the workers are mutual, meaning that adding one to one of the three districts means that all players can use it for effects or actions that increase based on the number of workers. There is also a separate mechanism for building houses, which are player-owned, in each region that may impact other functions and these also key to a simple endgame majorities scoring, whereby each region gives the player with the most structures points equal to the number of workers present.

Process couldn’t be simpler. You place a worker, and then either choose to build a building or do one of two actions offered by the region. If you have Gold, one of the game’s resources, you can pay overtime and make them do more things but not the same thing twice. At the end of the turn, the region you’ve acted gets attacked by tentacles, which are these magnificent green miniatures. A die is rolled for each one, and they might eat a house or a worker, make another tentacle, scare away a worker, or do nothing.

But of course, a big part of the game is fighting back against the tentacles and that’s where the token-flipping and spinner-spinning come into play. Hunting is an action, and it makes food and fame when you successfully do so. But you can also hold onto harpoons to protect workers and buildings from attack, flipping or spinning when someone directs an attack toward you.

You’ll spend the 45 minutes or so building up workforces, establishing footholds in the three regions, collecting sets of resources, and leveraging opportunities to convert them into Fame, Gold, or harpoons. Occasionally, you might spend some resources on available task cards, which aren’t recommended in the rules for younger players but I can tell you that my 9 and 7 year old had no problem with them at all. In fact, my preview copy also includes one of the stretch goals, a set of “Dirty Deeds” cards that add more naughty take-that action. I would not choose to play the game without them, and honestly they should be part of the core package when it hits retail.

The core worker placement and majorities concepts might seem boring at first glance, but the wacky setting and fun-first approach make Tentacle Town a winner. I’m also especially pleased with how focused the game is in an era where “more for more’s sake” is a prevailing design trend. It’s yet another title that frankly makes me kind of sad because the crowdfunding era has somewhat waylaid smaller, quirky, goofy games like this that aren’t offering some kind of “ultimate gaming experience” with 300 miniatures, a never-ending campaign, and a solo mode. It’s a modest little game with simple goals- family friendly fun with accessible depth and plenty of tentacle terror.

RolandHemisphere replied the topic: #301056 23 Aug 2019 18:38
I've just backed this on Kickstarter after waiting patiently since reading about it months ago. I'm surprised this game isn't getting much attention considering the pedigree of the designers and the fact that it looks solid. May 2020 can't come fast enough (well, that's not true, but you get my drift.)

Also, maybe I’m just biased because of my current game selection but this genre of family-weight Euro designed for Target shelves seems kind of crowded right now. I’m sure this will do decently at retail, though.

charlest replied the topic: #301085 26 Aug 2019 09:40
Yeah, I think this style of game is not the type that's going to blow up on Kickstarter. I think they've actually done very well so far and am very happy they funded.

This. There's nothing that turns me off more about the current environment than how tailored it is to KS stalkers/mass collectors. I'm not even that thrilled with the whole "stretch goals that won't be available at retail for two years" aspect (Lords of Hellas, come on down!), but I'll tolerate it. Anything that lists a bonus for the first 24 hours/500 backers or whatever is an auto-pass. If I want the full experience of the game, I should be able to purchase it at my discretion. I'm not interested in spending any more time on KS than I have to (which is next to nil, at the moment.) One of the really refreshing things about Ravensburger/Prospero Hall's approach is how straight retail it is. New expansion is out? I just go down to my local store and buy it. Certainly, it helps to have the kind of licensed material (Villainous, Jaws, etc.) that the latter outfit has been pushing, since it will generate sales that an unknown like Tentacle Town won't and that's usually the argument that people will put out for a KS campaign to "build hype", but I'm not (ahem) buying it.
Read More...