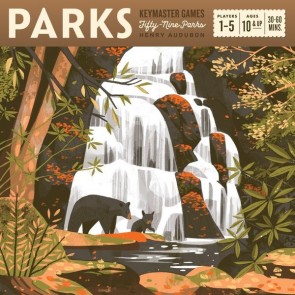 In his fantastic review, Space-Biff said his favourite moment of this board game was when he started only collecting the parks he’s visited in person. I tried the same strategy and lost. Not even a single point. Now this could be because I’m from Australia, but more likely it’s because I’m a self-deprecating shut in.

If you’re familiar with Tokaido or the Soviet army mid 1940’s you will immediately recognise the core mechanic of the game. Point to point movement, where you must always move forward.

For those unfamiliar, imagine a hiking trail from a park map, with multiple lookouts and highlights connected by a single line. On your turn, you move one of two hikers along this path. Activating the spot that they stop on, usually providing you with resources.

You spend these resources when you get to the end of the trail, either buying gear – which provide you buffs lasting the rest of the game, or you visit parks. Which is the main way to gain points.

Beyond this, there are secret goals for each player, random round effects, another less productive way to get victory points and a trail that grows every round. 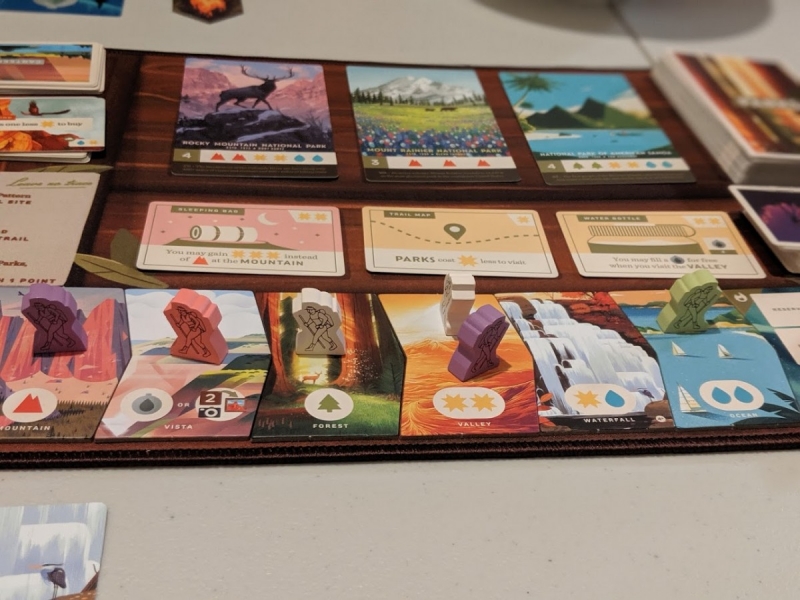 These additional trail tiles really open up the game. Specifically, the Waterfall tile which lets you copy the activation of another tile someone else is on. This allows you to activate a tile you’ve passed previously, or yet to visit. And the Lookout tile which allows you to visit a park. Upping the number of parks you can visit per round from 2-4.

So why not just visit every tile? That seems logical right?

Well, you can’t stop on a tile that already has a hiker on it unless you set up a campfire. Which you can only do once or twice per round. Picking when to set up a campfire is very often the determining factor in how well you do.

However, it’s also how well you can block other players. And as the game goes on, the more important this indirect player interaction becomes. In the first round, with only 5 tiles on the board, they’re more than likely to have a campfire ready to go. Later in the game, the number of tiles in the trail jumps to 9, almost doubling the size of the journey. Forcing someone to use a campfire early will put them in a tough situation later. 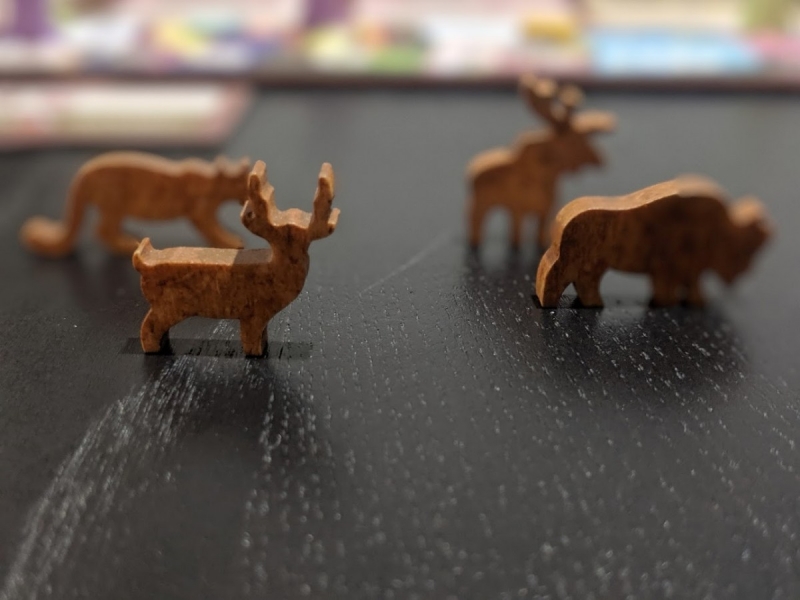 These animals count as any resource.

When you’re not sabotaging or being sabotaged on the hiking trail, you’re focused on gaining required resources for a park visit. This requires you to constantly rethink how you’re playing, and how much you can push your luck. Creating a sense of tension whereby you’re wondering how many resources you can get away with before the next player pulls the trigger and steals that sexy five-point park you were eyeing off.

Now let’s talk about the camera. It’s the alternate way to get victory points. It is not core to the game but can be likened to the chocolate powder sprinkled onto your coffee. It’s that sweet little twist that makes the whole drink a lot better.

It works with the Vista tile. This tile gives you the option to take a photo – worth 1 point – for any two resources and gives you the camera. If you already own the camera, it allows you to take a photo for one resource and take an extra photo if you can hold onto it until the end of the round. This creates a king of the hill type mini game that adds an ounce more complexity, but a lot more decision space and player interactivity.

Taking a step back, Parks is a sight to behold. The artwork is phenomenal but only a part of the package. The insert, the metal starting token, the pastel colour pieces, everything is produced with a level of care that is rarely seen in board games.

But that doesn’t make a good game does it? 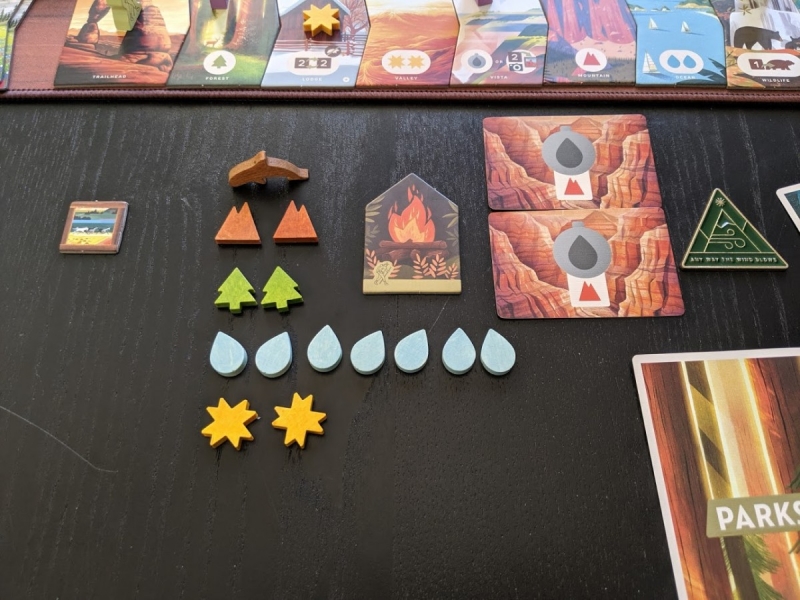 Halfway through the game - I'm a hydro homie.

If we circle back around to Space-Biff’s review, he concludes that the game is formulaic, bland, and doesn’t have enough going on to make it a game that you’ll return to. And I can see his point, the most innovative mechanic in Parks is improving Tokaido by adding a secondary hiker. However, I disagree when it comes to the blandness. As while I wasn’t plunged into the wells of thought some other games would throw me into, there was enough to keep me occupied.

But outside of this, the turns were snappy, the rules are straight forward, and there’s plenty of variability in how the game plays out each time it hits the table. For me, Parks was everything I wanted Tokaido to be. And after being disappointed with Keymaster Game’s last outing in Space Park, I’m glad they’ve returned to form.

Parks is one of the most enjoyable games I’ve played from this year.  It’s a Critical Hit, and I, for one, look forward to the next time I get to play it. 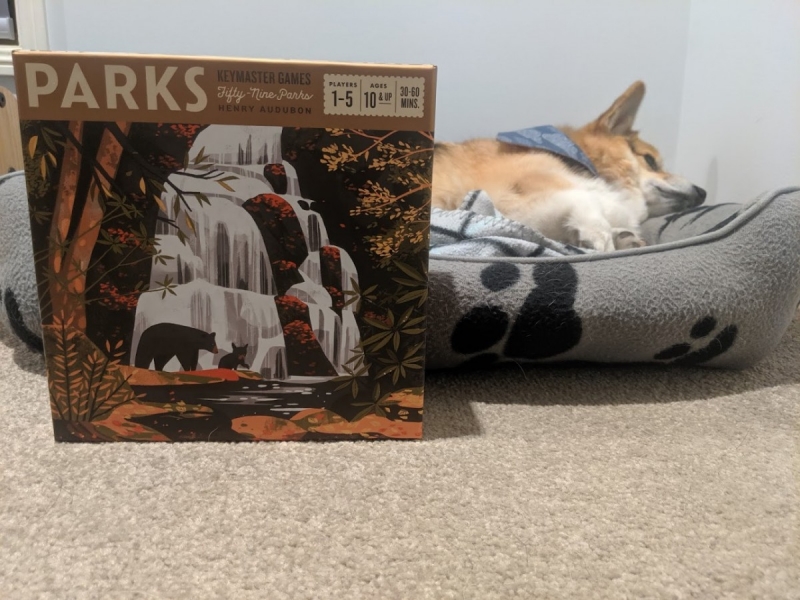 On the other hand, Chester is nonplussed.

This is definitely one of the prettiest/most photogenic board games I've played. And the animeeples are absolutely stunning! My favourite component 2019.