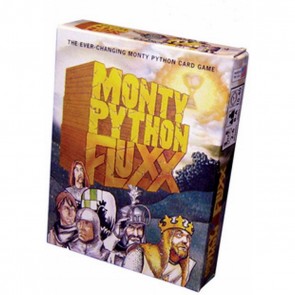 Somewhere, hidden in the darkest depths of the interwebs, is the original review guidelines for the Review Corner that was written by our own Micheal Barnes. It is mostly standard fare regarding word count and such. However, one “rule” stood out to me when I was first reading it. “No Monty Python references.”

But sir! My reviews are 50% pop culture references and 80% horrible puns. This Venn diagram shows that removing Monty Python references from my arsenal of writing could very well create a tear in the space time continuum! Wait, is Time Bandits guilty by association? You, sir, will be hearing from my barrister, Archie Leach (or, at the very least, receive a nasty phone call from Basil Fawlty). Fear not, intrepid reader, for I have returned to taunt the “No Monty Python References” rule a second time. (The first being in the Are you a Robot? Review). And what better game to do it with than Monty Python Fluxx (Mønti Pythøn ik den fluctuäting) by Looney Labs.

During the days of old (2008), Looney Labs created Monty Python Fluxx (Mønti Pythøn ik den Fluxx). Who would have thought that thirty (ed- Eleven) years later, we'd all be sitting here playing the Chateau de Chassilier of card games. Aye. In them days, we'd a' been glad to have the price of a cup o' tea. A cup ' COLD tea. Without milk or sugar. OR tea! In a filthy, cracked cup. We never used to have a cup. We used to have to drink out of our used card sleeves....

Sergeant-Major:
Right! Stop that! It's SILLY. Very SILLY indeed! Started off as a nice little idea about Monty Python and Card Games, but now it's just got SILLY! 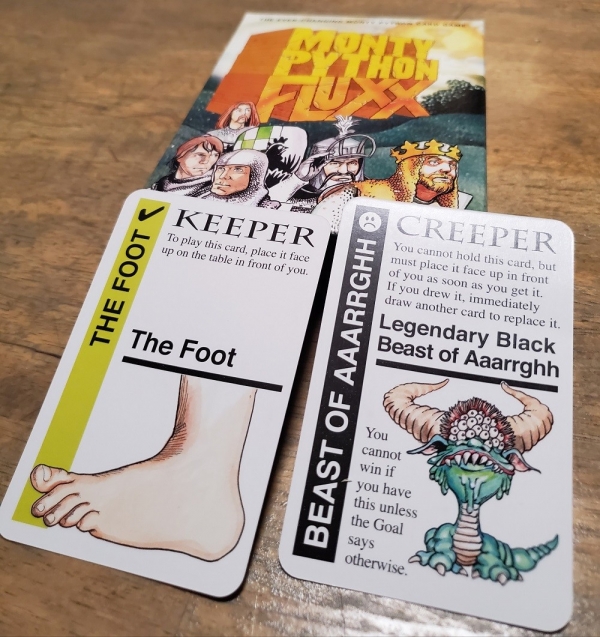 Ahem. As I was saying, like almost all versions of Fluxx, it contains Rule, Action, Keeper and Creeper Cards. In the years since, Looney Labs has managed to reduce the amount of text on each Fluxx card. Instead of a full explanation of what to do with a card at the top of every single card like you will find here, they assume that you do have the memory capacity of a unladen swallow. So, in retrospect, Monty Python Fluxx seems a bit cluttered with all the text on each card. 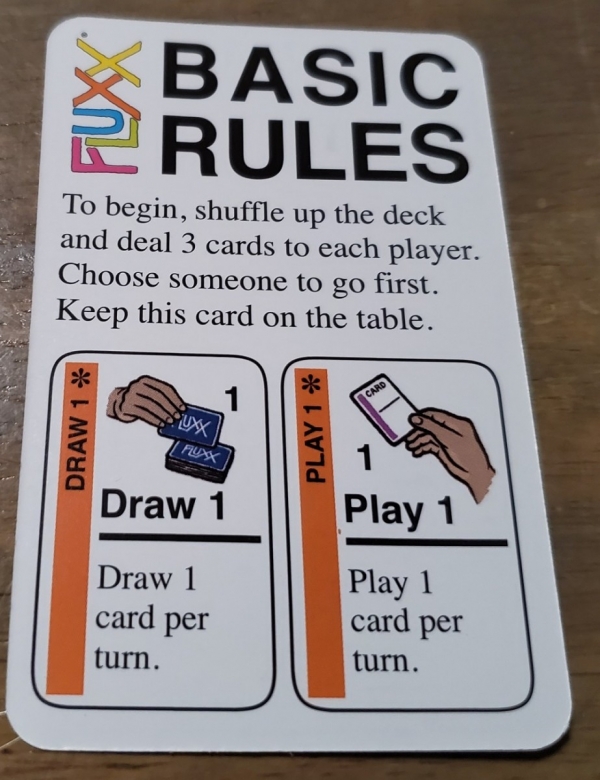 And, like almost all other versions of Fluxx, the goal is still the same...which is to try to achieve an ever changing goal while adding more rules, executing actions and generally avoiding Creepers. As you would expect, the cards all have a distinctly Pythonesque flair. Take, for instance...
* Flips out the “My Hovercraft is full of Eels” card * 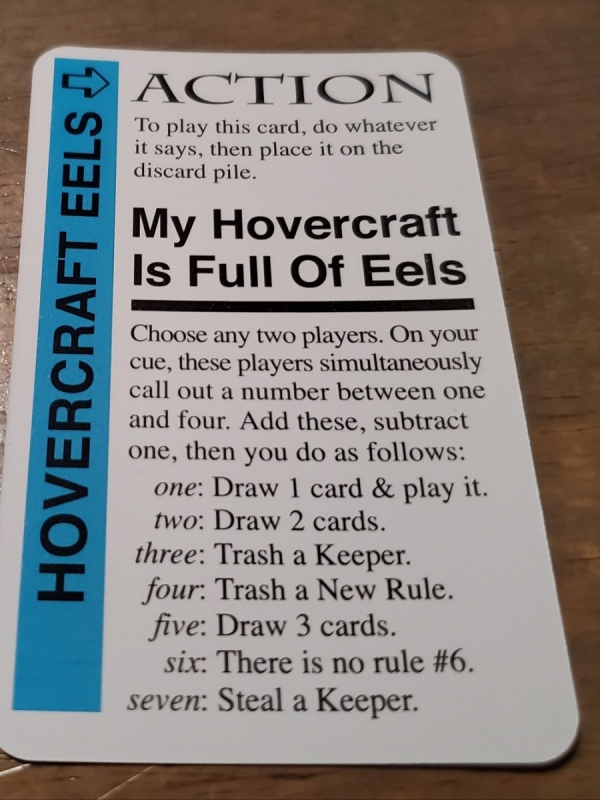 *quickly opens the stock market app on phone *
Oh, god. Oh No. Just as I suspected. Not immediately recognizing this reference has caused my Geek Cred to plummet! I swear, if it would have said “I will not buy this record, it is scratched” I would have KNOWN!

All jokes aside, a major portion of the enjoyment of Monty Python Fluxx resides in knowing the source material. Despite being “Monty Python Fluxx” the majority of the cards are pulled from Monty Python and the Holy Grail (Mønti Pythøn ik den Hølie Gräilen). I mean, everyone HAS seen the film at this point, right? Hell, all my kids watched Monty Python and the Holy Grail in 8th grade as part of a English class. No, I am not joking! (Well, the scene at Castle Anthrax was not included in the version they watched...not unlike Sir not appearing in this film).

You'll find what has become the “traditional” Fluxx rule cards with the game and some Python specific rules are hilarious but, in actual execution, can slow down the “normal” pace of Fluxx. Others, like singing a Python song or quoting as much Python conversion dialogue as you can, actually affecting what your reward is, are irreplaceable. These have lead to some of the most unintentionally funny moments, like being serenaded with a Eddie Murphy-worthy version of “Spiced Ham” (Rhymes with Roxanne).Rest easy Looney Labs, not being able to use the actual name of Spam within the game ended up giving us even bigger laughs than expected. 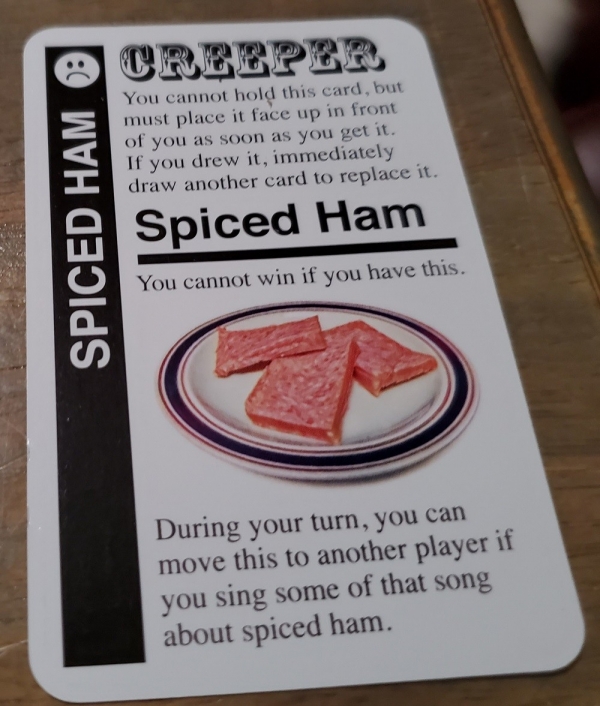 Since it's initial release, there have been some expansions and promo cards released for Monty Python Fluxx (Wi nøt trei a høliday in Sweden this yër?). These have double (tripled?) down on the Holy Grail theme with The Black Knight Expansion, The Monty Python Castle Expansion and the The Sir Not Appearing in this Game promo card. Variety is the spiced (ham) of life and dropping a few new rules, actions, and keepers keep the game fresh and, honestly, how can you NOT want The Black Knight (Creeper or not) to make an appearance in your game? He gives you plenty of dialogue to spit at anyone who refuses to give you a rematch after you lose a game.

I'm not sure if the “Castle Expansion” is a intentionally meta but it made me snicker after hearing the story of how Castle Doune was practically used for every castle in the entire film. More important than the actual castle is the inclusion of “French Persons” cards. Like the Black Knight card, he is a Creeper (since he was blocking Arthur from getting the grail) but the included goals incorporate him into some new winning conditions. 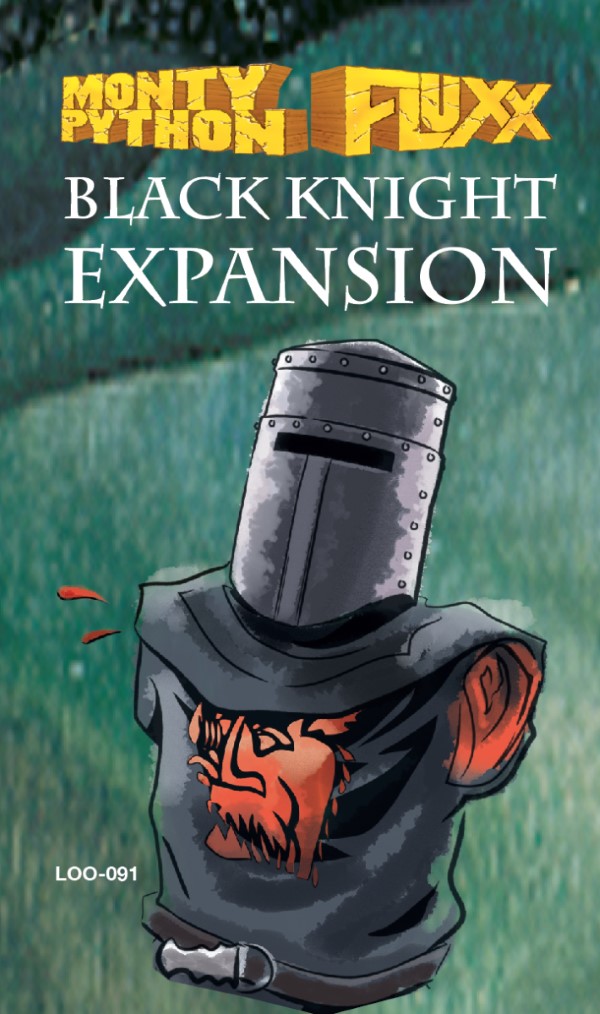 Monty Python Fluxx is the most foul, cruel, and bad-tempered card game you ever set eyes on...I mean, it's light, it's ever-changing and it pays excellent homage to the Monty Python legacy. Simply sit it on your shelf and watch gamers and non-gamers alike ask about it. “Remarkable game, Monty Python Fluxx, idn'it, ay? Beautiful plumage!”

WadeMonnig replied the topic: #301991 25 Sep 2019 10:18
The distinct lack of comments on this and the Are you a robot review is only justifying Michael Barnes ban on Monty Python references. Please, think of the children.

Shellhead replied the topic: #302000 25 Sep 2019 12:15
The newer boardgame subject matter seems to be reaching farther and farther back in time for pop culture references. I can understand the appeal of using a good one like the Cthulhu Mythos that is also in the public domain. But it gives the impression that this hobby is only for old people. The real problem is probably the firehose of mediocre board games flooding the market in recent years, with each one vying for some kind of distinctive hook for potential buyers.

Shellhead wrote: The newer boardgame subject matter seems to be reaching farther and farther back in time for pop culture references. I can understand the appeal of using a good one like the Cthulhu Mythos that is also in the public domain. But it gives the impression that this hobby is only for old people. The real problem is probably the firehose of mediocre board games flooding the market in recent years, with each one vying for some kind of distinctive hook for potential buyers.

Aging audience to buy the games and cheap licenses imho.

Also, most big licenses are taking a much firmer hand with controlling their brand, I wonder if that's part of it?

My 16 year old daughter sent me a screen shot of drawn to life where she attempted to use a holy hand grenade with the caption of disappointed when it didn't work. #parentgoals

Shellhead wrote: But it gives the impression that this hobby is only for old people.

The hobby is increasingly for whales, not players, and older people have more disposable income. You are not going to see many people in their 20s jump into the Kickstarter train because they cannot afford it.


That said, more and more of both gaming and pop culture is dominated by franchises and remakes. Just look at cinemas: IT, Chuky movies, Aladdin, The Addams Family, Jurassic Park, Star Wars, Men in Black, Jumanji, Terminator, Hellboy. We don't live in an original age.

It doesn't help that nerdom is the most inbred thing in existance. The vast majority of nerd stuff can be traced back to Star Wars, Lord of the Rings and Lovecraft, often several of them at once. Or anime, which is itself extremely inbred.

ubarose replied the topic: #302028 26 Sep 2019 16:22
Spamalot gets produced by High Schools & Colleges, so new generations of Theatre Geeks are continuously being introduced to Monty Python. I don't know how much cross over there is between Theatre Geeks & Board Game Geeks, but there is some, since a good deal of time is spent in the green room playing cards.

Sagrilarus wrote: So boardgames are this era's toy trains?

*Stares at his dust-covered train set*