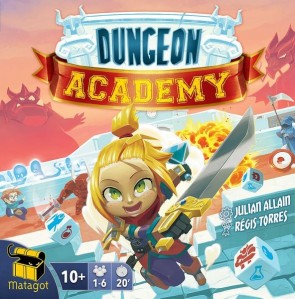 Game Name
Dungeon Academy
Publisher
Matagot
There Will Be Games

Nip and tuck isn't just the preserve of the plastic surgeon but the dungeoneer too. At least that's how it seems as I fold and pop together a little cardboard dungeon for Dungeon Academy. Finished, it's a sweet little extra, a lidded tray to hold sixteen of the games custom dice in a concealed grid. It's not strictly necessary, but its value becomes apparent when I whip off the lid for the first time. The reveal elicits small sounds of appreciation from the assembled gamers.

Next, I start a timer and we're off. Forty-five seconds doesn't sound a lot of time for an aspiring adventurer to chart a way through the dungeon, and it isn't. Each dice in the grid has six faces. Four are monsters which do one or two damage to the player's health or mana but you earn a point for each you pass. The other two are potions which regain a health or mana. The challenge is to make it across the randomly rolled level, getting as many points as possible without dying.

It sounds easy. It isn't easy. Especially not in forty-five seconds.

All the aspiring pupils in Dungeon Academy have special powers: mine is that I get a bonus point for each two-mana monster, called a Reaper, that I defeat. There are also quests which give you bonuses for certain monster combos, but you can only score each one once. So I'm staring at this sea of blue and red, trying to work out how I can get the most score while taking the fewest hits.

I have, thankfully, managed a route through but it's not a very good one. I've taken a lot of mana damage which I now have to carry through to next round. However, I was at least first to find a route through which means I get first pick of three randomly chosen loot cards.

Luck is with me: one is a mana potion that will restore two precious blue orbs to me. In a further stroke of fortune, those left to my two opponents are rubbish. Not all treasures are created equal. Grumbling, they take their booby prizes while I re-jig the dice for our second run.

Round two sees a new dice added to the grid which features corridor icons restricting movement direction. Seeing its black map piece staring up at me from amidst all the blue and red does make it feel more like a real dungeon. But when it comes time to trace a route, I simply go round it. 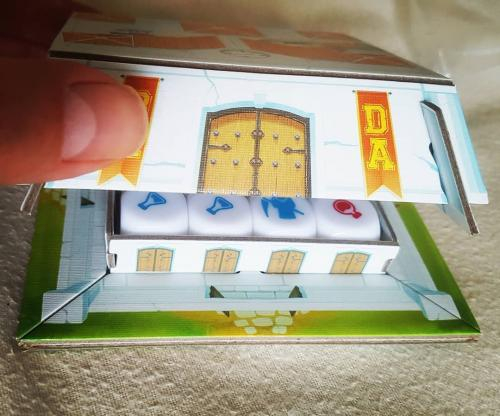 This time I have a better grasp of the factors needed to score and draw fast, getting out first. It gives me time to ponder how cleverly it balances the need to score against the need to survive. There's quite a lot going on for a super-quick roll and write.

It's time I should have spent pondering my route instead as I see, to my horror, that I've overreached and killed myself. Health and mana don't refill each round - only if you die - so my bad first round is coming back to haunt me. Being dead, I'll score nothing, which puts me out of the game. It's a short game, but that's still dispiriting.

Then I remember that mana potion. It saves my life. Not only do I stay in the game, but I've got a big haul of points from my clever path. In doing so I also get first pick of the treasures, again. Again, I get a great find, a weapon that lets my slay one kind of creature for free, while they get useless scraps. They are not amused.

It's a similar story over the next two rounds. The final one introduces a horrible "boss" dice with enemies on it that will almost surely kill anyone, so we simply avoid them. But my loot has already put me on a better footing so I keep finishing first and getting better scores. It's a foregone conclusion. One player, who's last every round, gets fed up well before the end even though the game only took fifteen minutes.

That said, I'm willing to play any game that only takes fifteen minutes. And while a light game, Dungeon Academy seems both deeper and thematically richer than any other roll and write I've played. So I take it home and try it with the kids.

They take the short rules in their stride well enough. But again, they struggle with the speed and thus fall behind with the loot that comes out. My youngest becomes particularly petulant and doesn't want to try again.

With such speed, though, the eldest and I are very happy to try again. First, we ignore the loot cards altogether and find the game faster and more fun, if a little less challenging. Without the variety of the treasure to mix things up, we end up taking much more similar routes through each grid. Next, we deal random treasure cards. This is better but introduces quite a strong luck element into proceedings.

But you know what? We discover that with two, it's far less of a problem anyway. There's less loot to pick from and a higher chance they'll both be poor or both be good. The same goes for the solo game, which runs as a kind of super-fast random puzzle and proves extremely enjoyable. After several solitaire trips through the grid, I'm irritated to find that there's no copy of the sheet to download and print, so I scan and make my own.

In the end, I spend an evening thinning the deck, removing the weakest loot cards. Next time we play, hopefully, the slowest player won't keep getting left further and further behind. It's a testament to the core appeal of Dungeon Academy that I'm willing to spend the time doing so. It's a testament to all the other quickfire dungeon and family games out there that, so far, I haven't had a chance to test my revised deck out.

September 08, 2019
Rating
3.0
Dungeon Academy
A quick, clever roll and write that's both thematically and tactically better than most of its peers, spoiled by an unfortunate rich get richer problem.