Setup is Half the Battle - Core Space Review 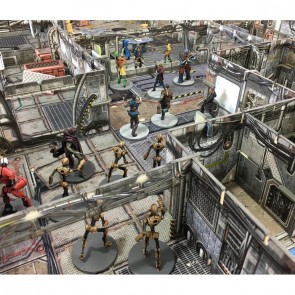 Is 30 minutes of setup worth it?

The answer is yes. Core Space is worth spending 20-30 minutes to set up. The other answer you might be looking for is also yes. The rules are a shambolic mess. Let’s just go ahead and dispense with those “concerns” in the opening salvo here.

Battle Systems, a UK-based manufacturer of some really cool cardboard terrain, has cooked up a sci-fi skirmish game to go with their products and the result is a stunner, despite those potential “concerns”. This is the Mass Effect, Firefly, Solo, or Cowboy Bebop game you have been waiting for. Rival trader crews are tasked with completing raids to accomplish scenario objectives, and these sorties inevitably end in shootouts, lots of looting, and shattered robot bodies. If you’re lucky, your crew won’t be the one trying to drag a downed teammate back to the extraction point. Or maybe you’ll pop open a crate to find a sick weapon that you can use or sell for the money. This is a visceral, exciting game that exists somewhere in the space between cult classic Earth Reborn, vintage ganger-banging Necromunda, and a thawed out Frostgrave in space.

What I really love about Core Space is that it captures a real sense of being in the middle of a sci-fi shootout, casting you as the action director of episode of an imagined show about scrappy bands of renegades fighting over a score and then maybe finding themselves strange bedfellows as they have no choice but to team up against a horde of killer robots. It’s not co-op, but the game’s situation actually creates space for negotiation and alliances of convenience. This is extremely cool, especially in campaign games where maybe that time you helped the other guy or gal out pays out when you are in a pinch yourself.

And you will get in a pinch because this design has a built in escalation mechanism. I’m totally in love with this game’s tempo. There is a hostility gauge that goes up a peg each turn, and as it increases the likelihood of the Purge (the killer robots) showing up to sour the job. Further along the Hostility tracker, new enemy types become available and MORE start streaming in through the spawn points. The first time someone shoots at a Purge robot in a turn, you also add a peg. The result is a very reliable sense of the whole thing just going pear-shaped and descending into absolute mayhem in the back stretch of each mission as teams scramble to get out alive.

I love the detail in this game. The messy rules buy a lot of neat possibilities on top of the usual skirmish tropes. Ammo is tracked, and there are weapons you can overcharge to pump out more damage – if they don’t jam. There are armor items and shields. There are NPCs that you can trade with, persuade to join your crew, or they may decide to shoot at your people. Each character has a host of skills and specializations that add a lot of variety and texture. The campaign game lets you improve your crew members, their ship, and do a little buy/sell/trade of gear with various equipment vendors.The rulebook makes learning about and executing all of this stuff unnecessarily fussy and initially bewildering, but once learned the process is quite smooth and relatively free of superfluous crap. It really could have used a solid player reference card.

The rules writing is a definite downer, and despite the other downer of extended setup time required my litany of love for this game has to include the terrain. It’s awesome. The game is packaged with a mousepad-style mat, a ton of walls that you clip together with plastic clips, and lots of assorted scatter. It’s all color printed cardboard so there’s very little prep work required to get this stuff on the table. The miniatures are very descent and I found them worthy of speed-painting with some Citadel Contrast colours to decent tabletop results. The toy factor calls to mind classics like Space Crusade and Heroquest. What kind of heartless game player wouldn’t be absolutely delighted that the crates in this game are actual 3D objects into which you put the loot counters? Yeah, it takes a few minutes to stock them, but you also get to actually open crates and see what treasures are inside rather than just drawing a card off a boring-ass deck.

But let’s get real – it’s not really much longer of a setup time than most complex games, and it’s probably less than it takes to set up Heroscape or something like Imperial Assault which sags under a bunch of that aforementioned superfluous crap. Another dose of reality – there really isn’t reason you can’t set up one layout and play multiple campaign games (30-60 minutes each) across it, rearranging the scatter, crates, NPCs, spawn and entry points. Don’t panic, I can assure you that the gameplay and objectives will not be bowdlerized or wildly imbalanced if the walls and doorways are set up differently than what is printed on the scenario brief. It isn’t that kind of game. The real variety is in the die rolls, skills, event cards, and whatever weapons and gear turn up. Also, I won’t tell anybody if you decide to throw up a quick game with Kill Team or Necromunda boards and scenery instead of the Battle Systems terrain to play Core Space. Or if you just draw the layout on a flip mat.

Finally, since it always comes up from you folks who read game reviews to make up your mind about purchasing decisions – yes, this is a complete game in the box and it offers plenty to explore and engage with, no additional purchases necessary. Of course, there are extra crews and expansion boxes you can pick up but for two players this is a lot of game. I find myself wanting more of Core Space and I will likely try out the more substantial add-ons, but if this were all the Core Space ever I’d be well satisfied with it. This is an excellent skirmish option among a crowded field, offering a more complex and detailed experience than many of its peers.

Virabhadra replied the topic: #301982 24 Sep 2019 20:25
"since it always comes up from you folks who read game reviews to make up your mind about purchasing decisions"

Since it didn't come up in the review, $100 base set for a game you've never heard of.


Has this been confirmed? After reading this review I'd love to check it out, but am reluctant to shell out 80 pounds sterling less shipping from the UK.

Never say never, and all that, but it will be a while if I decide to part with it. I am really enjoying it and it keeps coming out.

"It really could have used a solid player reference card."
I've almost finished a rules summary and reference.

Gary Sax replied the topic: #315657 28 Oct 2020 18:50
Bumping this from way back because they have another kickstarter out and hotseat reminded me of this excellent review.
Read More...