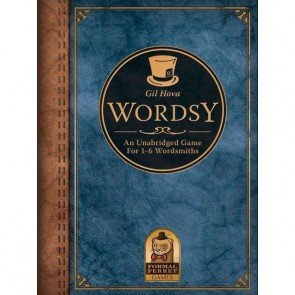 Word games come with an inherent problem. However much positional and strategic skill designers bake into them, winning is often a matter of vocabulary. That's fine for lexicographers but it's also a shame because word games tend to be accessible titles with wide appeal. Which is great for adults, but far less so for families with children.

Enter Wordsy. It uses a mechanic which is common in game shows but, for some reason, rarely seen in tabletop games. All the letters go in the centre of the table for everyone to use, and player can add whatever other letters they like to make a word. It's just that they only get points for ones on display.

The value of a letter is also based more on its position than its rarity. Short words that use high-scoring, common letters can be as valuable as longer ones with more esoteric contents. Not always, of course: if a longer word can suck up more of the eight scoring letters for each round, they'll do better. So dictionary-readers can still enjoy an edge. It's just that everyone else can get a look-in too, enthused by the dream of pulling a punchy word for high points.

Adding to the balance is the dreaded timer issue. This is another common noose in word games: either they drag, or a timer makes life miserable for the slow. Wordsy solves a lot of this by giving everyone the same letters and make words simultaneously. Nevertheless, Wordsy does have a timer, but with a kindly twist. The person to finish first can get a bonus, but only if they manage a high scoring word. That player is also disqualified from being the fastest player next round.

If this sounds a bit fiddly for a word game, it is. This is Wordsy's worst fault. It's hardly Campaign For North Africa but it is a bit hard for casual gamers to wrap their head around. After the intensity of the letter puzzle, there's always a moment of "wtf" while the players figure out who gets what bonus. Then, after seven rounds, players drop their two lowest scores, another great equalizer to keep the player invested. So it's a bit of effort, but as long as there's one experienced player in the mix to keep things moving, though, it runs fine.

My parents and my wife both love word games but beloved titles like Scrabble proved too much for wider and younger family. The last time we played Wordsy, it wrapped in 30 minutes and my eldest daughter took it by a single point, thanks to a smart combination of skill and speed. A little confusion over scoring and the cost of a small-box card game both seem prices worth paying for such a fun, widely appealing word game.

September 23, 2019
Rating
4.0
Wordsy
A lovely little lexical package, which offers all the fun and challenge of wordplay while making it accessible to all.
MT
Matt Thrower #1 Reviewer 286 reviews