Just a Nibble for Me, Thanks: A Bite Me! Board Game Review 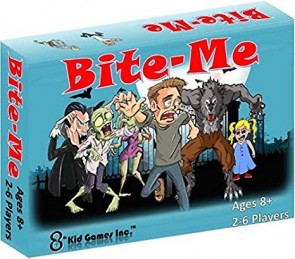 Bite Me is a simple card game. The goal is to try to stay human and kill a host of Halloween baddies. Let's throw it over to George Thorogood for a quick verse about your objective:

One Vampire, One Zombie and One Werewolf (sung to the tune of “One Bourbon, One Scotch, One Beer” by George Thorogood)
I Ain't seen my baby since she turned into a vamp
Gonna get gassed and stake her ass
Now she's a zombie, I've had enough
Gonna drop a nuke, right on that butt
Gonna win this game, took out the lycanthrope myself
I've killed One vampire, One zombie and
One Werewolf.

During your turn, you can take either one or two actions (a.k.a. play one or two cards). This can lead to “combos” (and I use that term loosely). Essentially, most player's turns break down into a.) Turning another player into a Monster and then, b.) trying to kill them. The ethics of turning someone into a monster and then yelling “Ah! A Monster! Kill it!” aside, it is a pretty basic premise. Play a higher attack card than the defense card they play afterwards and you slay them. 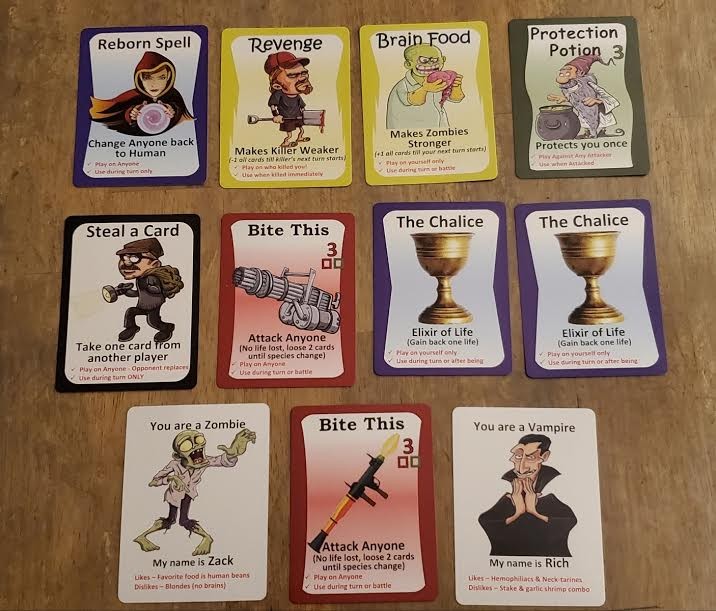 The game uses color coding for all the cards so that you know what type of card they are. This is a great idea: play a card and, in the top right of the card, they have icons that show what color cards can be played to counteract them. Unfortunately, that is the entire list of positives for the cards. Some cards have the explanation text cut off, others include typos and some are simply unclear. For instance, terms like “Use during Turn” could mean use during your turn or use during another players turn. On the plus side, 8th Kid Games assured me that they would provide replacement cards for those that include typos for anyone who requested them.

The art style in the game is schizophrenic. It is part MAD magazine, part dollar store dungeons and dragons knock-off. Others, like the grail card, looks like someone bought a subscription to stockphotos.com The player mats that are used to track player deaths and creature kills are at least consistent in their art style but include some incredibly cringe-worthy puns (and, hey, this is coming from me!). 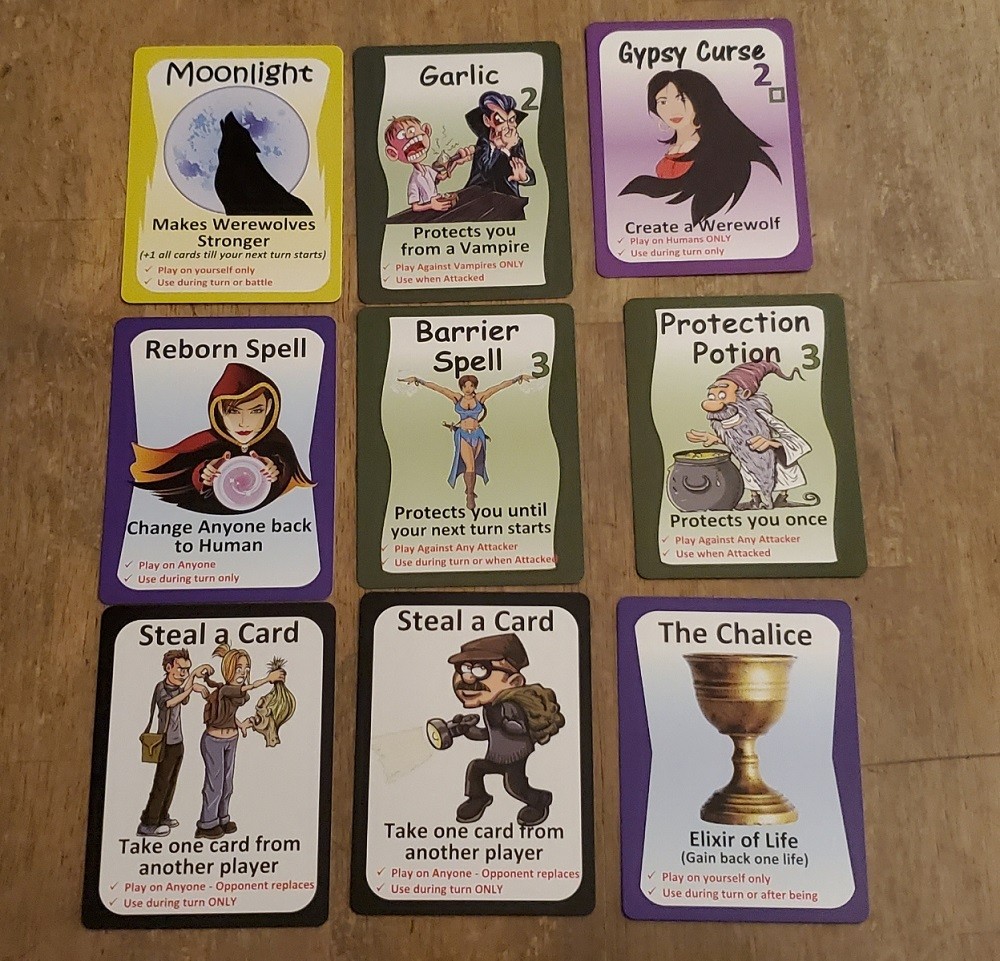 When Bite Me does try to step outside the basic “highest card wins” premise, things can get a bit hairy. Turning a player into a type of creature that already exists (Such as a Vampire when another player is already a Vamp) leads to an Alpha Challenge. This is a battle between the two vampires. So, let's define Alpha: it means “Socially Dominate” or “Highest Level in a group” So, this isn't actually a Alpha battle, more like a Highlander battle: There can be only one. Winning the Alpha battle counts as a kill for the victor and a death for the loser but the challenge also reduces (loser) or increases (winner) your hand size...and let's everyone know you are vulnerable. Since you have to show everyone your best attack card and then discard it, you had better turtle up because someone now has you in their sights. Unfortunately, there are also no included chits to track your current “allowed number of cards” status during the game. It is all up to the players to remember.

Even some of the cards take a bit of figuring out. Take the Reflection Shield: A human hunter (we're going to call them hunters because Supernatural) attacks a werewolf with a level 3 attack; the werewolf uses a Reflection Shield which reflects the attack back on the human who, in turn, can't defeat it because they have no level 3 defense or attack cards...so they die...expect humans can't die in this game. It's in the rulebook. As it turns out, if the attack card is Werewolf specific, nothing happens to the human. If it is a “Bite This” card being used on a human, no life is lost, they just lose two cards. In the case of a “Bite Me” card being used on a human, the losing human becomes the same species as the winner and then an Alpha battle happens. Once again, 8th kid Games was more than helpful with helping me suss out rules that I was unclear on, but I'm not sure most players are going to put that much effort into getting a clarafication.

As I said at the start of this review, it is a simple game. It is essentially part War and part Uno. The issue is that it never really equals those game in terms of fun or replayability. Strategy consists of “Pile onto the weakened player” and “Hope you draw the most powerful cards.” After a few plays, even that modest entertainment value drops off dramatically.

October 04, 2019
Rating
1.0
Bite Me!
Bite Me! is a simple game. It is essentially part War and part Uno. The issue is that it never really equals those game in terms of fun or replayability. Strategy consists of “Pile onto the weakened player” and “Hope you draw the most powerful cards.” After a few plays, even that modest entertainment value drops off dramatically.
W
WadeMonnig Top 10 Reviewer 195 reviews