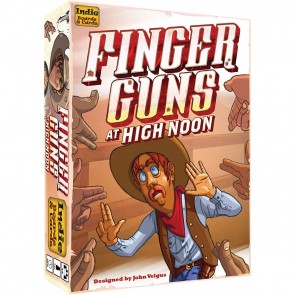 Finger Guns At High Noon. Gunslinger's choosing an action from their player sheet: Actions that will either deal damage, heal, or claim a ally. At the end of the shoot-out, you want to be one of the survivors: wounded, bruised, but still standing. Equal parts fast talking and fast fingers, your strategy could be more in what you say than what you do. The winner could be the stoic and silent Man with No Name or an incessant braggart like The Kid. Or a gunslinger's past could come back to haunt them as a collective of dead players exact their revenge from beyond the veil.

When a game supports three to eight players, can be completed in roughly 20 minutes and usually turns into a raucous, chaotic party game, one might expect it to play fast and loose with the rules. Instead, I found Finger Guns at High Noon an incredibly tight, strategic experience that clicks like Roland Deschain's well-oiled, sandalwood-gripped .45s. 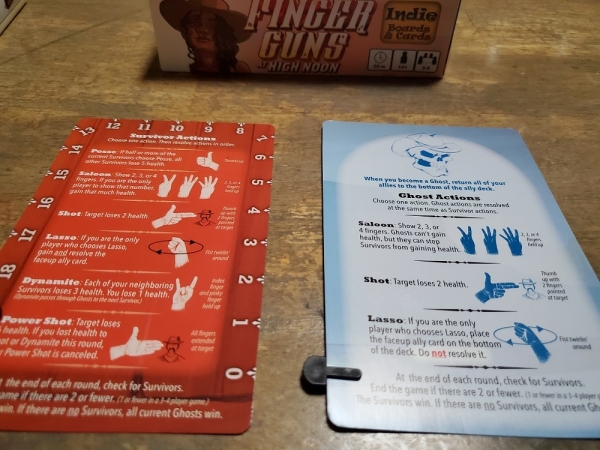 While you are first learning the game, it can be more than a little wild. But there are rules and thematic checks in place that help control the flow. For instance, any player can start a round by simply counting down “3,2,1....Draw!” They can do this as quickly or slowly as they want. One of the core nuances of the game is the discussion before a round begins. This is because a number of actions involve group participation. Take the Posse action: If half or more of the Survivors (Current players who haven't been turned into ghosts) take the Posse Action (signaled by using the Thumbs Up gesture) then the remaining Survivors who didn't take the action lose 5 health. As you can imagine, “Starting up a Posse” can take a bit of negotiation before the round begins. So, a player quickly and constantly yelling out “3,2,1...draw” can mess with the plan. That is where the Sheriff Badge comes into play. The Sheriff Badge is given to the player that calls Draw! The previous round. If you are the Sheriff, you cannot call Draw! During the current round. This thematic and extremely visual reminder (you are given a badge when you are the Sheriff) keeps the game from being dominated by a loud, enthusiastic player that could negatively impact other players enjoyment of the game. 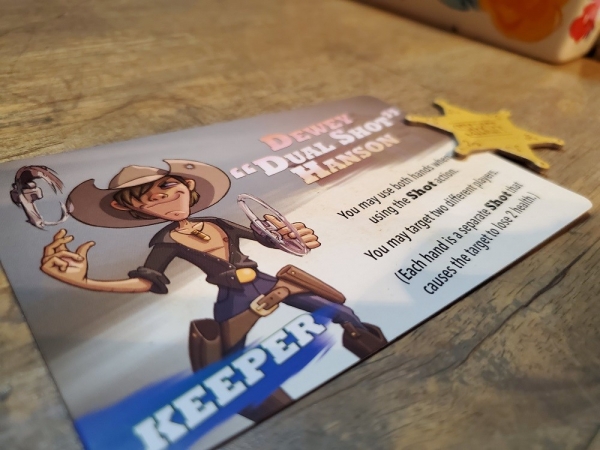 You might think the goal of Finger guns at High Noon would be to make sure you are the “Last Man Standing” but I was surprised to see that in the five to eight player games, there are “Two or fewer Survivors, the Game ends.” That seemed like an odd winning condition really bloomed into a fantastic strategic opportunity when playing. Watching the two players with the most health remaining go toe to toe was expected, but watching their near silent negotiations to take out the other remaining players to claim a shared victory was like watching Annie Oakley and Frank Butler teaming up to become a sharp shooting duo.

Finger guns has a great balance of risk and reward and it really, really shows after multiple plays. The amount of damage that various actions do is extremely fine tuned. The Saloon action is way to recover health but it never lets you “Turtle” You simply throw up two, three, or four fingers and if no one else is displaying the same number showing, you recover that many hit points. But Powershot does six damage and Posse does five, so you can never really “Hole up” with these threats being on the table.

I'm always a fan of devious decisions and you will find plenty of them here. If you think that the player to your left or to your right is going to attempt to Powershot you, you can use the basic “Shot” action, which will do two damage to them AND cancel their Powershot. Or, if you think that BOTH of them have their sights set on you, you can use the Dynamite action which will cancel a Powershot, hit both of them for three damage while hitting you for one damage (visions of every western scene of someone lighting a wagon full of dynamite while sitting on it comes to mind.)

It took Bang! The Dice game an expansion to finally address the concern of player elimination. Finger guns does it right off the bat in fine “Ghost Riders in the Sky” fashion. Players that are eliminated during the game become Ghosts. Instead of simply sitting on the sidelines and taking pot shots at the living players, they can form an undead posse of there own and, if they can manage to eliminate all the survivors, then the Ghosts win the game. Of course, they don't have the full range of attacks available to them but what they do have let them sway the course of the game in slight ways and conspire to leave no man standing for the victory. 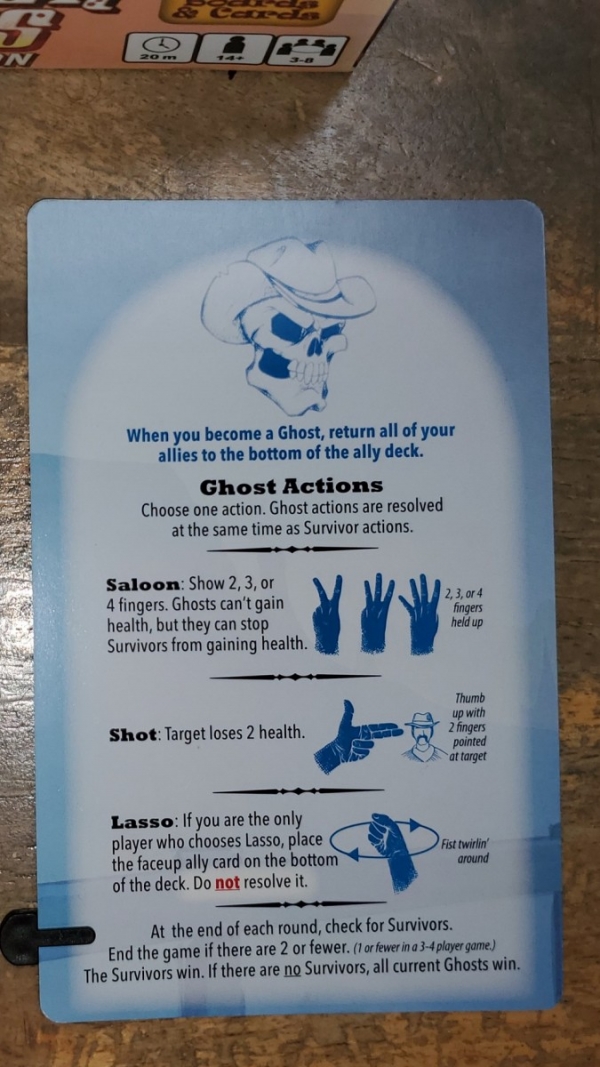 The one action that I haven't addressed is the Lasso action. This is used to “round up” an Ally. On the table is a single, face-up Ally card with various game-bending actions Some can be one-shot instant actions but others will alter your actions for as long as you are alive. One of my favorites is the Dewey “Dual Shot” Hanson, who lets you use both hands when doing the shot action. Of course, if you and any other player both try to Lasso an ally at the same time, they cancel each other out. It's just another lovely balancing of risk versus reward found within this game.

Don't let the assumed resemblance of Finger Guns at High Noon to titles like Bang!, Cash and Guns, or even Rock, Paper, Scissors scare you off. What Finger Guns is offering is an experience that is deliciously different from all of those titles. It is a short, sharp and strategic game that uses what is found between your ears just as much as what is found at the end of your arms.

October 04, 2019
Rating
4.5
Finger Guns at High Noon
Don't let the assumed resemblance of Finger Guns at High Noon to titles like Bang!, Cash and Guns, or even Rock, Paper, Scissors scare you off. What Finger Guns is offering is an experience that is deliciously different from all of those titles. It is a short, sharp and strategic game that uses what is found between your ears just as much as what is found at the end of your arms.
W
WadeMonnig Top 10 Reviewer 195 reviews

There are no user reviews for this listing.
Already have an account? Log in now or Create an account
Discuss this article
Log in to comment
Posts in discussion: A Practically Perfect Pointer-Finger Pistol Party. Finger Guns at High Noon Board Game Review

charlest wrote: I absolutely love this game and it's in my top 10 for the year. It was probably my top play of Gen Con.

I'm not sure how I'm doing my 2019 "Best Of" list this year but Finger Guns is currently a lock for any "Best Party Game" category.
Read More...