Vast: The Mysterious Manor is the Arthouse Dungeoncrawl - Review 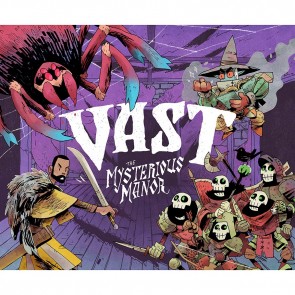 One of 2019's best and most compelling designs.

The genius of Vast: The Mysterious Manor is in how it manages to present itself as the Rashomon of dungeoncrawlers. It’s an arthouse entry in the genre, fracturing its narrative viewpoint across five distinctive roles accompanied by a divergent suite of rules for each. In some sense, it is closer to an actual RPG than any other game of this type has gotten, if only because the independent yet interlocking rule sets create a tableau where differences are expressed beyond the usual special ability/individual objective paradigm. The Paladin is out to vanquish the Spider at the heart of the mansion, exploring and leveling-up along the way. The Skeletons are out to kill the Paladin, moving through the darkness and looting armories to get better equipment. The power-seeking Warlock is our to dominate the manor's resident poltergeists and treasures. The manor itself is a playable role, controlling physical space and seeking to seal itself off from the outside world. And then there is the shapeshifting, multiphasic Spider, who really just wants to feed its babies blood and exert a degree of terror over the place.

The matrix of competing agendas and how they play off of and against each other is fascinating, and it creates a stronger sense of competition than is usually seen among dungeoncrawlers. This game breaks so many established rules of the genre that it risks declassification. I’m not sure, given the rather stagnant state of the never-really-successful “RPG on a board” concept, if that’s a bad thing. Vast emerges as very much its own, idiosyncratic thing. Like the best films or movies or books that challenge convention, it thwarts expectations and realigns values. If the big crowd-pleasing Heroquest-descended dungeoncrawls are the gaming analog of arena rock then this game is a post-punk experiment. Its virtuosity is expressed in wobbles and weirdness, angles and awkwardness rather than in fist-pumping bombast and the kind of formal meticulousness that often passes for mastery.

It’s also something of a do-over, this idea didn’t work a hundred percent the first time. Iterating on a previous design (Vast: The Crystal Caverns, with David Sommerville) Patrick Leder has refined what was initially a somewhat cumbersome concept into a revision that is more playable, more fun, and more immediate. But most importantly, he has not sanded off all the rough edges and this game remains prickly, jagged and almost defiantly imperfect. It still feels a little tentative- in a great way, in the way that maverick work often does.  It refuses to be “easy”. It doesn’t care if you are a little confused at first because you’ve not really learned how to play whatever role it is you are playing. Sure, there’s plenty of advisement on the player aids and in the reasonably well-written rules. But this is a game you’ve got to play and play repeatedly to get to the really great stuff it wants to do.

Here's how I knew that I loved Vast. After my first game, I was left with a range of conflicting feelings. I didn’t enjoy it. I was sort of bewildered by it. I had a strong “is that all there is to it” sense. I oscillated between thinking that one role or the other was boring/broken/too complicated/too simple. Did we even play it right?  It just felt wrong. But I couldn’t stop thinking about it right down to the awesome Kyle Ferrin illustrations and the colorful plastic miniatures that capture his distinct style. I wanted to have another go. I wanted to see it from every angle. But more significantly, I wanted to explore those fault lines between the roles and also the places where the teeth of the mechanisms mesh together and turn in sync. I wanted to feel this game again.

"Feel" is a very rare, elusive, and maybe even psychosomatic thing. I play game after game in a given year and there’s really just a couple of them that have a “feel”.  But in Vast, that feel is tangible, unique, and alluring. I want to play as the Manor more. I love the challenge of the Spider's complicated actions. I find myself playing the Paladin-only solo game just be in this game’s process, even if the solitaire option is a stripped back and heavily modified variant. Yeah, it’s hard to teach to a group. Yeah, you’re more than likely going to have a shit first game. But stay with it, let it move you, and you’ll find that it is a brilliant piece of game design art in the vein of Root, the best game of 2018 also published by Leder Games.

This review was always going to go back to Root and by that route also back to the newly ascendant Dune. Because this game is part of the new asymmetry, ushered in by the rediscovery of EON’s hypothesis that not everyone has to play the game by the same rules. Vast is something far more evolutionary and revolutionary than the lazy way that designers slap special faction abilities across their Kickstarter Dudes on a Map designs, or in insisting that giving characters +1 or -1 stats creates “narrative”. It’s a suggestion that five games can be one game, with a central hub uniting them with just a couple of common rules concepts. This is so thrilling in a hobby where supreme balance and reliably repeatable and wholly homogenized experiences are valued over volatility and the sexiness of daring, difficult designs.

If there’s one thing that Vast isn’t though, it’s not wild. It's never a banger. It's not chaotic or rambunctious at all, and its drama is more cerebral.  The game is structured and measured but never really explosive or unhinged - because it has to be contained or it won’t work. You can’t even play just any arrangement of the five roles with lower player counts, and even the sets you can play require changes for them to function. But that’s a trade-off that buys you this game’s directorial artfulness. The frontier explored isn’t in emergent narrative or open world influenced player agency. It is in carefully metered restriction and judicious control over what a player can and cannot do as part of a proscribed role. Maybe this means the game feels somewhat on rails, possibly even a little icy. Maybe without this structure the carefully built gestalt narrative collapses. Or maybe it means that this game is a perfect argument for the auteuer theory in the tabletop medium.

This is a brilliant, mold-breaking, and redefining dungeoncrawler. It’s bold and challenging. And it makes me wonder why other designers are content to continue to emulate a decades-old kids’ game rather than explore the genre along different mechanical and conceptual lines. Vast is one of the best games of the year, and it is one that I hope inspires other designers to do things differently.

Thanks to Leder Games for supporting what we do here at ThereWillBe.Games with a review copy of this game. We never accept any payment for reviews from publishers or designers.

BTW - This game was Kickstarted.

Michael Barnes replied the topic: #302222 05 Oct 2019 18:04
Hey, how often do I get to just flex on something like this? It’s rare something comes along that really inspires me to go full critic like this.

Yeah, it’s a Kickstarter all right- and the upcoming Root expansion also from Leder is the only thing I’ve ever backed other than Glory to Rome. I had no qualms about backing them on that- it’s a proven company with proven product and a relatively modest KS. It’s kind of unavoidable anymore. But I’m no less critical of the platform, especially with their union-busting.

Frohike replied the topic: #302223 05 Oct 2019 19:24
I understand what you're getting at here, but just as Vast has -- via KS increment -- improved & crossed a qualitative threshold that has made it a noticeably better game, so have the strawman "Heroquest clones" you're decrying in the review. These were all the rage back when Dark Souls came out but I think the relentless KS churn has started to also introduce some good designs into this space. As much as I'd like to think that Vast comes from a singular, "better" primordial soup, I think other styles of compelling crawlers are also emerging from the same swamp.

Michael Barnes replied the topic: #302224 05 Oct 2019 23:38
Sure, look no further than my reviews of Core Space and Lifeform- both are fundamentally dungeoncrawlers with Core Space being way closer to Heroquest. But Vast is really a very different format, with the whole multiple perspectives/processionally divergent roles thing going on. I think the roles concept isn’t necessarily new (see: Dune) but applying that to this kind of game is. I am including the original Vast on that.

This really makes me want to go back to Space Cadets. One of the big knocks on the game was that every player needed to be taught a different game - but we as an audience seem to be getting around that. I think in our case we were undercut by the 'zany' theme, which drew in players looking for a lighter game than it was.

So I'd love to do - not a retheme, but a resetting of expectations. I think it would've done a lot better as "Starfleet Academy", as people would bring a serious sense of 'learning the stations' to the table.

I've never played Vast (either version) but I'm considering a trade to get Vast: The Crystal Caverns with Fearsome Foes and the minis. I'm not a huge fan of Root, but I appreciate the concepts behind it and Vast seemed like even more a step in that direction, since it's more of a Euro adventure game than a DoaM. Worth it?

Michael Barnes replied the topic: #304415 21 Nov 2019 08:42
I think you will respond favorably to it, I think you will especially appreciate the finer points of the design. The asymmetry is just as wild yet cohesive as Root, but as you surmised it’s in a different genre and it strikes a very different chord.

Be advised that Crystal Caverns is something of a V.1 of the system. Mysterious Manor has some refinement and better rules. But if you like CC, that content can be played with MM moving forward.
Read More...