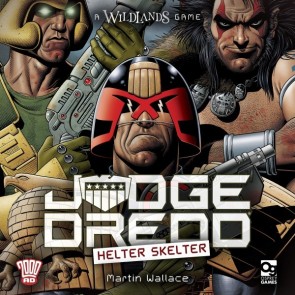 I didn’t get into Martin Wallace’s Wildlands, published by Osprey Games, when it came out last year. I was too deep into Warhammer Underworlds to venture into other fantasy skirmish games. When a new edition was announced with Judge Dredd’s stern jaw on the boxtop– illustrated by none other than Brian Bolland was announced I took notice . I have a really, really low saving throw against anything 2000AD-related. What’s more, it turns out, is that Judge Dredd: Helter Skelter (billed as “A Wildlands Game”) isn’t just a Dredd game, it’s a Strontium Dog, Slaine, and Nikolai Dante game as well. There’s some fluff reason that Johnny Alpha and company are roaming the Hall of Justice or the housing blocks, but just roll with it - it’s practically a tabletop Super Smash Bros. for the classic British comics magazine. And it’s a drokking good game- in fact, one of the best in its class.

What makes Judge Dredd: Helter Skelter (and, by retro-extention, Wildlands) so good is that it does that classic Eurogames trick of offering a combination of carefully measured and controlled decision points with substantial depth. It is card-driven, with each card featuring icons keyed to your team’s characters and occasionally a “wild” action at the bottom that can be used for any character. The actions are used to move around the board, shoot or make melee attacks, and use Psi powers to force discards. They are also used to defend, with attacks corresponding to defense icons. There are also a simple terrain rules, allowing for line of sight blocking, cover, and elevation, which makes it feel like a much more complex skirmish game.

You can activate as many characters as you want on your turn at risk of being card poor and potentially defenseless when your opponents play. But it may behoove you to do the discard of three of a character’s symbols to pick up one of the “Time Shards” that are the game’s measure of victory along with KO’ing enemy fighters. There is always a tension between spending and saving cards, and feeling out when to go out with a big turn versus holding back to recharge your hand or wait for a better opportunity is a consideration every turn throughout the 45 minute game.

But where this all gets really wild is in two absolutely brilliant ideas. One is that your characters do not start on the map. The game starts with everyone getting a hand of ten numbered cards. Five of these are selected and put on your characters. The other five are passed to the left and you get the remainder from your right hand opponent. Those are used to place your Time Shards. Each turn, you must reveal at least one character, but once again you can also reveal more if your hand calls for it.

The other great idea works in conjunction with the above. Among each of the teams’ decks are several cards that allow for interrupt turns. At first, I was like “what the hell is this”. But when I saw that it was possible in the middle of someone else’s activation to pop up with Judge Anderson as they approach and hit them with a Psi blast to force them to discard cards. Then you send in Mean Machine (he’s been deputized, it’s canonical) to pummel the crap out of them. Or, you might see Warp-Spasmed Slaine coming across the bridge from Dan Tanna to Enid Blyton Block so you play an interrupt and get a low-health character to safety. This creates a more fluid, dynamic battlefield than a typical IGOUGO style activation system can afford.

Beyond the smart mechanisms- all of which take up just a couple of scant pages of rulebook- the genius of the game is that all of the drama and narrative is produced strictly by gameplay. There’s no dice, no event cards, and almost no text in the game at all barring a couple of team-specific special abilities. Each faction’s deck is also tooled to favor different playstyles and approaches and that builds a strong sense of identity and variety while also rewarding players for learning to play with and against the different card mixes. Every time I play I’m just totally impressed at how much game there is for such a small rules footprint. It’s the kind of lean, no filler design I favor these days.

Now, the question that is almost certainly on many readers’ minds by this point is “how does it compare to Wildlands?” I’ve done my homework and I’ve gone all in on the original Wildlands game, thanks in no small part to Osprey goading me on with preview copy of the upcoming Fall of the Dark House map pack. Judge Dredd: Helter Skelter feels very much like a refinement of Wildlands with some of the less-good stuff changed (like the confusing character art on the cards and the lack of a good two player option) and one major revision to how the interrupts work. There are no wildcards in this edition, and the interrupts are now in the open action slots in the cards. This also means that the draw two and move any choices on those wildcards are now gone, and there is no replacing one of your set of of three to pick up a shard with one. This feels like smart streamlining, as the concept is the same but it’s even less rules to fuss with.

And if you can work out some reason the Judges are in a haunted house then the game plays just fine on that new map pack, which I adore. One side is a two-story mansion on two maps, but on the other side of them are a pair of two-player only maps. The base Helter Skelter game has you remove some of the setup cards to make the two player game more aggressive on its boards, but these two player maps are smaller and have fewer spaces. They are both excellent, and I’ve enjoyed playing them with both the Wildlands factions and the 2000AD gang.

Inevitably, I find myself wishing that Wildlands could somehow be updated to the new edition that Helter Skelter represents in all but setting and characters. It is the better game all things considered, and it makes me just a little sad to have come to Wildlands after it. With that said, some may understandably prefer the fantasy framing or artwork to the very specific 2000AD setting and characters. As for me, I say bring on the Dark Judges and the Angel Gang. Including Nikolai Dante over Rogue Trooper, ABC Warriors or Nemesis the Warlock is a bit of a head-scratcher to me, but hopefully that means that the game’s future in expansions is bright.

Thanks to Osprey Games for supporting what we do at ThereWillBe.Games by providing a review copy of this game. We never accept payment for reviews or other coverage.

engineer Al replied the topic: #302345 10 Oct 2019 17:55
Wow! I am incredibly excited about this!!!!! Wildlands was fun when I played it at WBC and like you, I can not turn away from anything Dredd related. Thanks so much for this review.

southernman replied the topic: #302347 10 Oct 2019 18:25
WHAAAAAAAAT ?!!! - No ABC Warriors, sacrilege ! - did Mr Wallace not offer enough royalties, whose going to do all the big jobs ?
Doing Rogue Trooper would need resurrecting Gunnar, Helm and Bagman to creat a team so that would be a bit strange, and Nemesis another loner I suppose.

Michael Barnes replied the topic: #302348 10 Oct 2019 19:56
Yeah, I would have thought ABC Warriors was a shoe-in...I’ve never even read Nikolai Dante. But I think the logic is that they’ve held back (like with the Dark Judges) to make the expansions more desirable. Not sure a Nikolai Dante expansion would sell. But Dark Judges? Hell yes.