Rough Seas Ahead: A Pirate Attack! Board Game Review 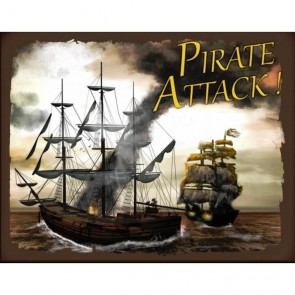 Game Name
Pirate Attack!
Publisher
What The Fun Games
There Will Be Games

My Pirate Attack! review copy arrived and, upon opening the package, I dumped the base game out of the envelope and then the “expansions” came pouring out. One, three, five, six expansions! Holy cow, this game must be a smash hit to warrant six expansions. Then I start opening the expansions: 50 more cards, 100 more cards, 50 additional cards, 100 cards and a couple of dice. Oddly, they all fit perfectly into the base game because space has be made for them. Hmmm, that is some Kickstarter “stretch goals” type of shenanigans. Going by the MSRP on Whatthefungames.com that means the “Full” version of Pirate Attack! With all the “expansions” costs....$140.00. *looks at Gloomhaven's MSRP of $140.00 * Hmmm. This is going to be rough.

In Pirate Attack, your goal is to be the last Pirate Sailing. You play ship cards in front of yourself and they have two stats: Cannons and Strength. If your cannons outnumber the strength of an enemy vessel, you sink them and win the battle. You can alter both the strength and cannons by playing modifier cards on your own or other's ships.

According to the instructions, the endgame requirements are: “The game is played until the last ship is standing, using all the cards” Okay, fair enough.... Wait, it also says “Optional Game play: Use the Fame Points chips. If you want a shorter game, use the end of the world card and Davy Jones Locker card (ed note: Which come in Expansion Pack #4). Set a Time Limit. Play to a designated number of Fame Points, start with less cards by separating into six piles and rolling a die to see how many piles to use.” I just want the best experience I can get playing the game. Throwing a bunch of variants at the beginning of the instructions and hoping something sticks isn't how I would go about that. Even the starting player “rule” is obtuse. It is “The player with the most/least Play Immediately Cards (or the most/least Gold Cards, or the Hurricane Card, or something that separates one player from the rest).” 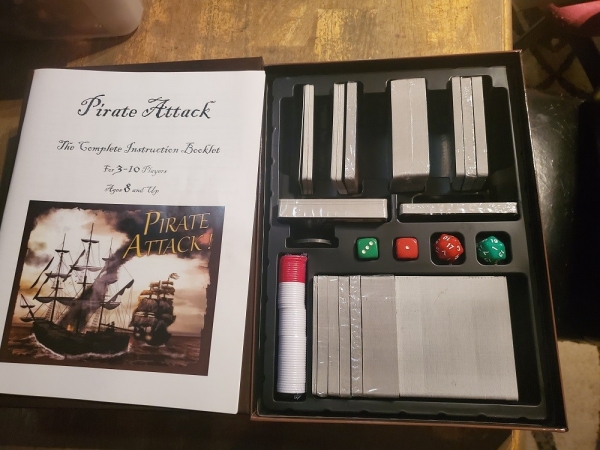 Once you have decided upon a winning condition, you begin the game by starting with a hand of five cards. On your turn you will: Draw a card. Play a card. If you have no card that you can play, you must discard a card. You are required to play a card if you can. So, there is no discarding a card that you don't want to use. Instead you can literally be stuck with hamstringing yourself because you have a Lazy Blacksmith card (which gives a negative to a ships cannon strength) but no one else has a ship in play for you to put it on. Have you ever been mad at yourself for a card played in a board game? Welcome to Pirate Attack.

Pirate Attack may be published by What the Fun games but the gameplay is more like What the Luck. What's the difference between building up a a low level ship with a variety of power-up cards to finally have it sporting 10 Cannons and 10 Strength and simply drawing a 10 Cannon/10 Strength Brigantine?

What decides if you can pounce on a lower level ship with no power-up cards played on it?

This is because you can ONLY attack (until end-game) when you draw a “You Must Attack Someone” card. And it's not like you can simply hold onto this card until an opportune moment arises to use it. All of the Attack cards are “Play Immediately” that must be executed as soon as you draw them. It doesn't matter if your only ship is a 3/3 basic sloop and the only ship available to attack is a massive 10/10 Brigantine, something is about to go down and *spoiler alert* it is most likely you to the bottom of the ocean.

The game tries to add variety by having cards you can purchase with Gold. Unfortunately, the cards are TOO specific. Take the Witch Doctor and Fortune Teller cards. 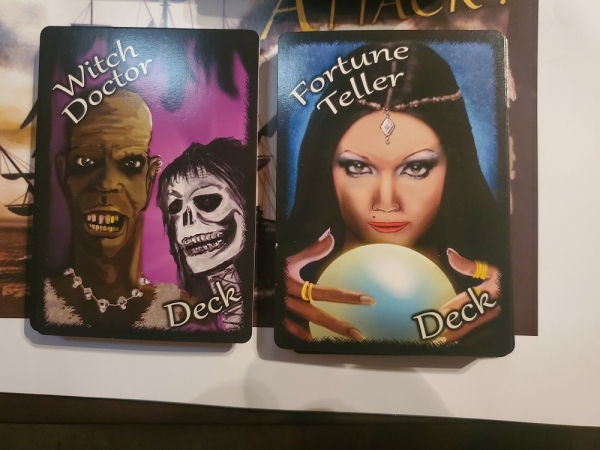 The Witch Doctor deck consists of: The Black Plague, Poison, Mutiny, Fire, and Storm. The Fortune Teller cards consists of: Vaccine, Antidote, Talking Parrot, Water Bucket, Navigator. Notice anything about these two decks? That's right: The Fortune Teller deck contains one type of card that will counteract exactly one type of card from the Witch Doctor Deck. They might as well be labeled “Bad Stuff ” and “Things to try to stop the Bad Stuff.” Now, trust me, I suck at math. But the odds of having the exact card (a antidote card) that would counter a Poison card is one in five. Frankly, those odds really suck. I would rather spend my gold on...what? When playing the base game, there is literally nothing else to spend gold on except these two decks. On the flip side, why wouldn't you buy the Witch Doctor card every single time, because it has the chance of being 80% effective going into one on one battle against a Fortune Teller card? And that is only one of the balance issues within the game. Some cards allow you to steal ALL gold from another player and it even manages to escalate from there. Another card allows you to Steal ALL fortune teller cards that are on the table. Another sinks EVERY ship on the table...including your own. Once again, you are shackled to the luck of the draw since you never know if these cards will come out in the first round or the last. And assuming that you play with “Continue the game until all stacks of cards are gone” ruleset, every single one of these cards are going to come out every single game. If you are trying to prove resources don't really matter, I guess having cards that remove all of them currently in play is one way to go about it.

Don't get me wrong, there are some truly interesting cards found sprinkled throughout the six expansions. Bounty cards that allow you to put the a price on the head of another ship or the Royal Navy card that spawns a ship that goes around the table, hunting down your fellow pirates. But the nature of “Play Immediately” means you never get to use them strategically.

The Art. Let's talk about the art. Or not. Let's just post a few pictures of some cards and you draw your own conclusions. 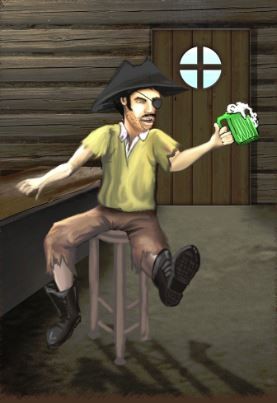 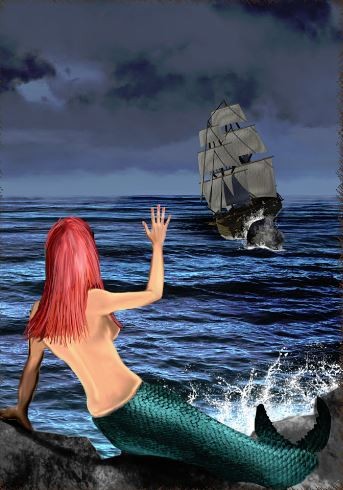 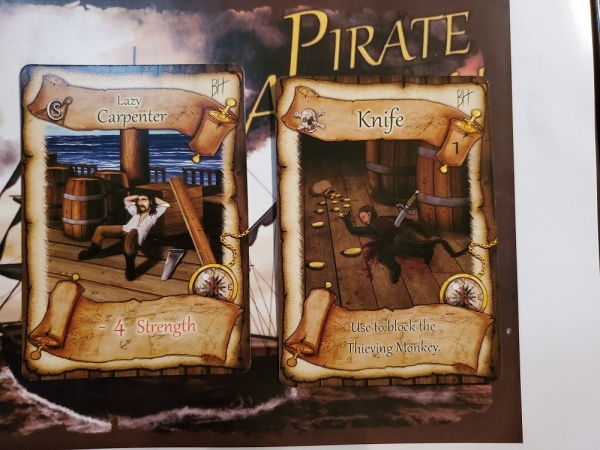 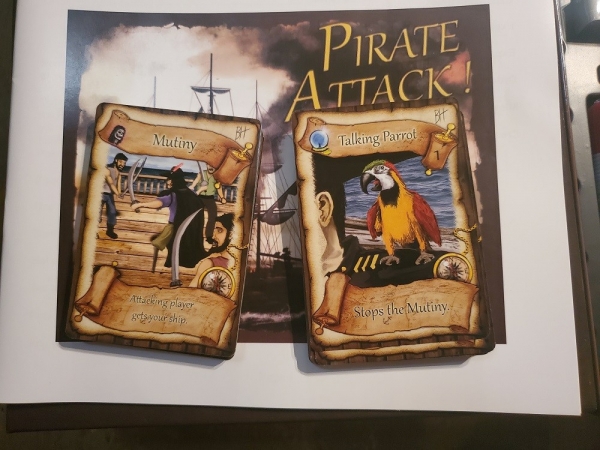 Pirate Attack says that it supports three to ten players. This only goes to prove the saying “Just because you can do something, doesn't mean you should do something.” The game suggests that when playing with six or eight players, you should play as teams (but doesn't say anything about ten players..which is weird). I can't even imagine what it would be like to play a nine player game where you don't even have the interest in what you partner is doing to engage you while you wait for your next turn.

When you have players asking “Are you play testing this?” It usually doesn't bode well for the game. Soft starting/ending conditions, cards that are obviously over-powered, and gameplay that is too reliant on luck are all part of this Witch's Brew. And none of this Witch's Brew feels like they were properly cooked to completion or, maybe more importantly, boiled down to their essence.

Jackwraith replied the topic: #302727 24 Oct 2019 10:54
Um... wow? This sounds like Games Workshop's halcyon days of "Randomness is FUN!" but, even then, the odds of doing something so horrible you'd regret playing in the first place were usually something like 1 in 6. What this also sounds like is: "Hey. People back ANYTHING on Kickstarter! Let's get in on it."

WadeMonnig replied the topic: #302731 24 Oct 2019 11:21
Prepare for a phrase I never thought would come out of my mouth: In defense of Kickstarter, it looks like the entire KS campaign had 9 backers.

Wade, consistently doing the hard work so we don't have to.

Shellhead replied the topic: #302738 24 Oct 2019 12:26
I find it interesting that certain subjects that seem suitable for boardgaming don't seem to actually result in good games, at least so far. Pirates, superheroes, and martial arts, for example.

So Wade, I appreciate the art could use a little work. But is there enough material here to house-rule your way into a playable game? If the Play Immediately cards become holdable and you add a way to discard your junk does a better came come into the picture?

Sagrilarus wrote: Just curious -- is the thieving monkey an actual monkey? It appears to have a tail.

So Wade, I appreciate the art could use a little work. But is there enough material here to house-rule your way into a playable game? If the Play Immediately cards become holdable and you add a way to discard your junk does a better came come into the picture?

If by house rule you mean removing Over powered cards, revamping pretty much the entire card play system, broadening the tit for tat fortune teller/ witch doctor shop, building a reward based victory system that uses earned gold to upgrade ships or gives purchasable higher powered ships in the market... then I can definitely say "Maybe."
Read More...