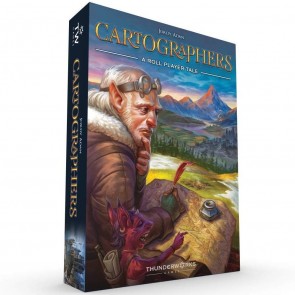 Sometimes, you see or hear about a game and it's instantly a must-play. Looking at the rectangular grid or Cartographer's playsheets made it obvious it was another geometric roll and write. But the pitch - that you're mapping the reaches of a fantasy kingdom - transcended that so far it was like trying to enjoy gliding by learning physics.

That pitch also worked on my teenage daughter. Now she's a bolshy independent, yet still enjoying life at her parent's expense, she eschews games that smell like "strategy" for D&D. Thrusting a game box between her and her phone earns me a look of withering scorn. But for Cartographers, she relented.

In part, that's because she gets to give her cartographer and her imaginary land a name and coat of arms, There's space for them on each record sheet. We fill them in earnestly. But it's also because the game is so fast and easy. There are four decks of scorings cards, from which you'll use one each game, ensuring no one strategy dominates. One of ours scored a point for each water square next to a farm square and vice versa. We were in hysterics over its name, Canal Cake, until daughter realised it's the typography and is actually called Canal Lake.

But forevermore, when I play, Canal Cake it will be. 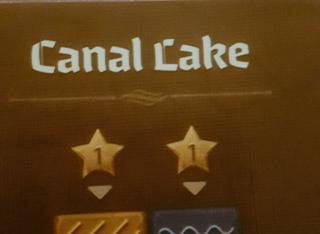 So we're flipping over explore cards, each of which has a shape and a choice of two terrain types, and filling in our maps as we decide. Each season, two of the scoring cards are in play. This Spring we've got Canal Cake and Borderlands, which scores big points for filling in a whole row or column. Each explore card also has a time value, the cumulative sum of which ends the round.

At first, I presume it's just a fancy turn-end mechanic. As the end of Spring approaches, however, its teeth catch me. I don't know if there's going to be one or two more cards before the next season to try and complete a row and score Borderlands. So: do I risk using the current shape to increase my score in that next season, or do I finish my row and bag the points?

I choose the former option. Naturally, it is the wrong pick and the season ends without my row.

During summer, a rush of Goblins reveals the true majesty of Cartographers. We're there, trying to eke out the scoring opportunities when we flip this purple card. I haven't taught this so, with mounting glee, I explain that for this card, we swap sheets and draw the shape on each other's map. The shape is awkward, a jagged three-square diagonal that doesn't mesh with anything. And if we don't contain it with neat terrain, it loses us points.

I don't explain that the idea is, of course, to draw it in the most awkward space possible. That should be obvious. When I hand her back the map and her face falls, I presume it has become obvious. There is no other roll and write I've played which has had a moment like that.

So it goes on, flipping cards and attempting to fit the scoring patterns of the season while refuting geometry and daring the timer. It's nothing, in practice, like mapping a fantasy kingdom: more like terrain Tetris. But it is a delicious brew, with a lot of subtle nuances. There are special "ruin" spaces on the map that are best saved if you can. There are mountains that are best surrounded if you can. And in the odd spoonful, there's the smackmouth chilli of drawing horrible monster shapes on your opponent's grid.

The next one is a Kobold attack. My daughter gets it this time, scrawling "KoBoldZ RulE!" over the least convenient squares imaginable.

It's not enough to stop me eking out a win, but it's close. Defeated and dissatisfied, she turns back to her phone. I glance up at the clock to see that's taken twenty minutes, including teaching time, and I'm elated by it. Flip and write with real bite. 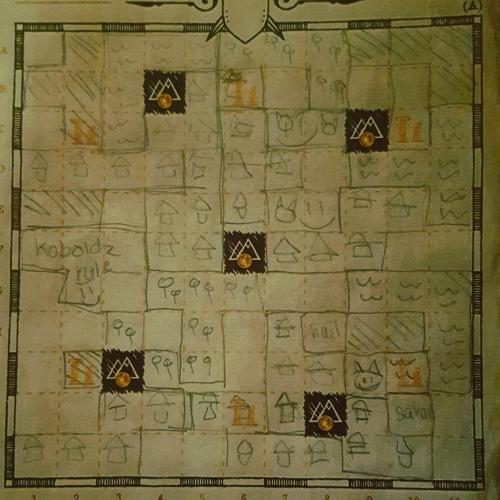 Deprived of an opponent, I sulk in the dining room with the solo version. The only difference is that monster attacks get resolved via a simple rule that dumps their messes on your grid semi-randomly. After toting up my score it looks like I've done well. Until I spot another change whereby you reduce your score based on the objectives in play. This reduces me from "Master Cartographer" to "Dimwit".

Stung by this rebuke, I try again, this time with the Skills mini-expansion. This sees three special power cards laid out: you can use one per round. They're themed like an adventuring party but it doesn't quite fit. No thief has ever used their Move Silently ability to chop the edge off a terrain shape. The more powerful skills cost coins, which would otherwise be worth bonus points, to activate.

Except for the weaker ones, though, which are free. In a multiplayer game, these are balanced because everyone can use them. But in the solo game, the free ones seem absurdly powerful. Maybe it's just luck, but second time round I earn my Master Cartographer rank for real.

Skills show their skill when I break the game out for my gaming cronies. There are vague complaints soon as they see the pad and pencils. But once I show them how they need to balance earning coins with using skills, they get their heads down. Within a turn, they're asking for a pause to name their lands, draw their livery. By the first invasion, they're scratching monsters on each other's sheets with obvious relish. Toting up the scores provides palpable tension and, in the end, there's agreement that it's the best "... and write" game they've played.

As I tuck the sheets back into my box as a record of scores, I'm struck by how tangible they are. Not in the paper beneath my fingers, but in that they are real records of a whole game played, of a potential place that might exist. You could even use it in an RPG. Cartographers might not make you feel like a mapmaker as you play. Yet a map gets made, nevertheless: a thing, an evocation of what the game purports to be. In that, alone, it is a cut above its pencil-based peers. The fact it maps out a challenging, properly interactive game as well is just an illumination on the atlas.