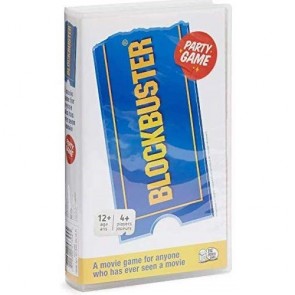 I have fond memories of heading to the local Blockbuster store on the corner of South Clerk Street and Bernard Terrace in Edinburgh. To a film nerd like myself they were churches of unseen treasures, future loves and fond memories. With the rise of digital consumption it was inevitable that Blockbuster, much like HMV who I worked for, would crumble. What wasn’t predictable was that Big Potato Games would release a Blockbuster inspired party game, but they did.

Make it a Blockbuster Night

I really like Big Potato Games, a company that eschews the usual route of appealing to hardcore gamers and instead produce quirky, party focused games that would look equally at home on the shelves of your local Tesco as well as your friendly local games store. Scrawl is a favourite of all of us at The Giant Brain a game that is a hilarious mix of telephone and pictionary and we hoped that we would enjoy Blockbuster just as much.

Big Potato Games really know how to package a game. Alongside the clapperboard and popcorn that came with the game for reviewers (thanks folks), the product is a total nostalgia fest. For those young enough not to recognise it, this game comes in a VHS case. The simple board is made up like an American style parking lot. Nestled alongside the cards is our final component. A timer. A beautiful, terrible timer.

Round 2 sees the parking lot finally come into play. We draw 6 cards from the other deck in the game, all film titles split up by genre. Choosing 3 of these we place them in the 3 spaces available to us One Word, Quote it, Act it. The remaining three are unceremoniously dumped on the opposing team to do the same with.

With 30 seconds on the clock, a long press on the buzzer sets it to a longer slower count, you try to get your team to guess the 3 films on your side of the board by:

One Word: describe the film using only a single word.

Quote it: Quote something from the film.

Act it: get your charades on

If you are quick enough and get all yours done you can go and try out some of your rivals’. Any of the films that are guessed successfully are scored and the first team to get 1 film in each of the 8 categories is the winner.

We’ve had a ton of fun with the Blockbuster game. Having to think under a timer really puts the pressure on your memory leaving you struggling to recall something as simple as a film that might fit into the category Movie with Ghosts. The second phase is equally as hilarious with much confusion as a friend points at a card and says ‘Antarctic’ (The Thing), quotes poorly from Star Wars or acts out driving over a cliff.

We did feel that the game dragged just a little. Only getting 6 cards every round means it takes a little longer than I would like to get to the 8 you need. However one of the joys of a game like this is that it can be easily house ruled and we found that drawing 9 gave you just a little bit more choice, even if you lost the head-to-head.

The game is very generous with what it allows, meaning that you can make up quotes or just use the title of the film if it is One Word in that particular category. It's great that it accommodates players with all sorts of film knowledge. We recommend using the Extra rules that prevent you using words that appear in the title and that you can’t spaff sequels back and forth in the head-to-head.

These minor concerns aside, Blockbuster is a great party game that I’ve thoroughly enjoyed playing. From the presentation to execution it really does hit me right in the nostalgia. Big Potato are constantly putting out new and interesting projects and if you are looking for a good party game then put aside the Cards Against Humanity and pick up your membership card instead.

A copy of the Blockbuster video game was supplied by Big Potato Games for review.

charlest replied the topic: #302652 22 Oct 2019 10:52
My wife doesn't really game at all and it's not a hobby for her, yet she really enjoys this one. She likes Time's Up as well but prefers this. I do kind of miss the repeated rounds of Time's Up, but I dig the strategy of this one in selecting which category for each card. Certainly a solid party game.

charlest replied the topic: #302675 22 Oct 2019 16:26
It really depends on their movie knowledge. There are many classic movies in this one. I remember Matilda, Back to the Future, and The Good, The Bad, and The Ugly being pulled.

thegiantbrain replied the topic: #302693 23 Oct 2019 03:39
You definitely have to have some movie knowledge but the game is very generous with how much in depth nerdery you need. There was a good spread of films that we saw so hopefully it would be appropriate for a lot of different age groups.

Sagrilarus replied the topic: #302708 23 Oct 2019 13:21
This is going to sound childish, but my business history with Blockbuster video is so negative for me that I wouldn't touch this game just on principle. Even seeing the box cover on the front page of there will be games was enough to elicit a Wince from me.

The question I have to ask is this -- what is this game bringing to the table that other titles are not?

thegiantbrain replied the topic: #302844 28 Oct 2019 09:35
I mean it's not bringing a huge amount new to the table. Either the theme grabs you or it doesn't and if not then there are loads of other games of this nature out there. It's not genre defining, just solidly good.