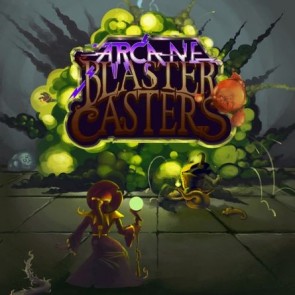 Creation is a powerful motivation for playing games: creation of story, of fun, of moments of drama, tension, victory and defeat. There is something primal in the creative act, it speaks to times spent away from the hubbub of the world, quietly making something merely because you want to, not because it has any intrinsic monetary value. I love games that allow me to create something, to have a story to emerge as I play and it is that creation that is at the heart of Arcane Blaster Casters, the debut game from Battle Boar Games.

Entering the Arena of the game you cast (thanks I’m here all week) your eye over the position of your opponents, the layout of the traps and then all together start to frantically recall all those spells you thought you knew. Pouring over your hand of cards you are tasked with assembling a spell, a devastating combination of magical energies bound to bring you victory.

You can take your time to craft the perfect spell but that will see you lagging behind your fellow sorcerers when it comes to when you get to cast your magic. Go quickly and maybe it won’t do quite what you wanted to or you’ll have been pushed out of position, unable to reach anyone with your conjurations. 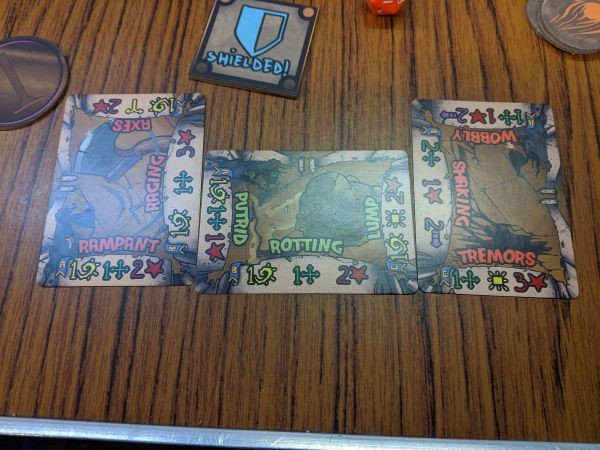 Or it might sound like something you get when you are ill. Each spell is made up of a A, B and C part.

Eventually everyone is ready, wands held aloft. The combatants stare across the arena at each other. Spells fire off. Some split. Some burst over huge areas, dropping traps as they. Some hurl you across the arena into the dark corners or through even more traps, hoping to hinder you before you can fire off your own. You’ve been blinded! Next turn cast your spell without looking at the cards. You’ll be faster for sure, but will you be lucky?

Traps drop all over the place and all the time. Not all traps are what you might think of traditionally as traps though. Some are actually beneficial, healing or shielding you from what is to come. Most are pretty bad but there is always the possibility of coming off alright even when being flung through numerous squares of terror.

The rounds are fast and zippy as everyone gets the hang of building spells, firing them off then trying to come back from whatever has just befallen them. Wrath is brought down upon those who have wronged you, or just because they were close enough to get hit, whatever works for you. 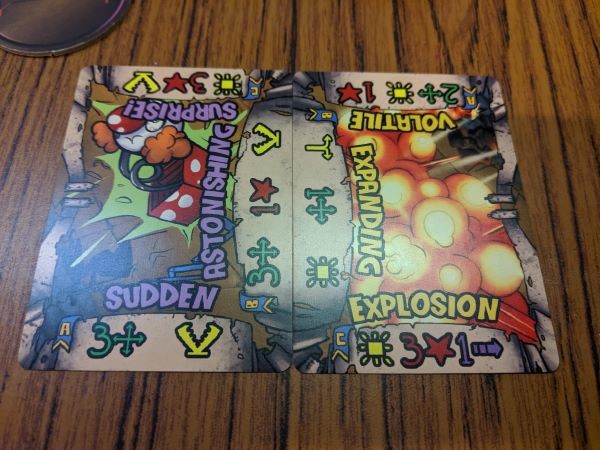 I was slowed this round so didn't get to use a middle piece.

Life totals are whittled down and eventually you will succumb to the mystical barrages. Rather than being eliminated you transform into a slug! You move the same, have less choices with what to cast and can only push out 1 paltry card for your spell but you are still in the game. Not only that but rather than having to construct spells in a particular order you can now just use any side of the card to fire off your magic.

No player elimination is a big plus in my book and there is always a small chance to come back, I’ve had it happen in the games I’ve played. You reform into your berobed self but eventually only one wizard will be left standing, the victor of this crazy arena.

Arcane Blaster Casters revels in its chaos. It doesn’t pretend to be something it’s not, embracing the wild, crazy, hilarious often disgusting sounding spells that are the core of its gameplay. 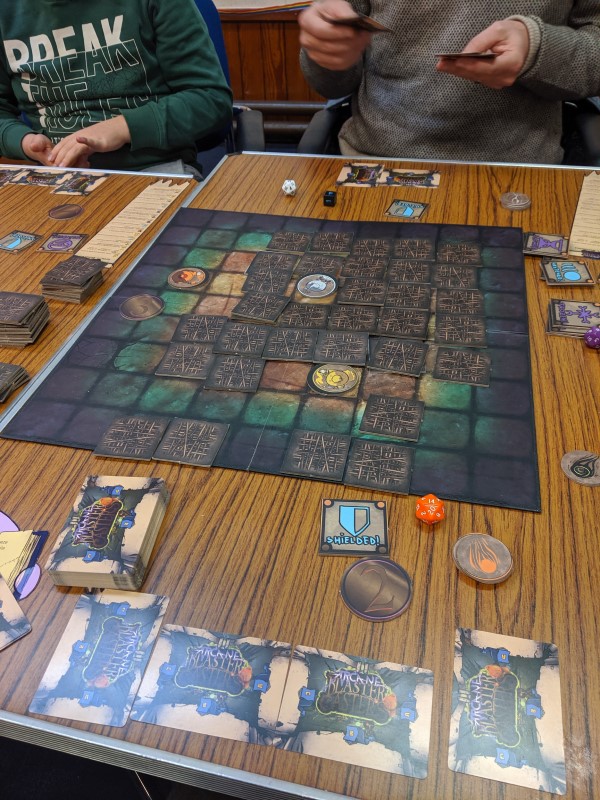 Game in full flow. Loads of traps is the norm.

With such a wide variety of abilities on the cards, the game can be a little overwhelming at first, but handy player aids allow you to pick through the spell you have formed in the same order each time. I would personally like to see them get rid of the Chaos power, an ability that gives you random things based on the roll of a die. To me the spells feel random enough already without piling another thing to do on top. Talking of dice the life point counter is a d20 and we found it could get easily knocked during play, minor but slightly annoying.

The art of the cards and casters is great, really evocative and makes every spell you cast look fantastic. The board in the version I have and the trap tokens feel a little out of kilter with the rest of the art, but I believe those will be getting updated for the final version of the game.

My last piece of concern with the game is how it will play at different number of players. I’ve played at a few different player counts, and at lower numbers it did take a turn or two for battle to be met. It also meant that towards the end of the game it could take a while for the game to resolve as the last couple of wizards standing. You could easily house rule the arena to be smaller for less players, but I can’t really speak to that as a solution as a reviewer.

Arcane Blaster Casters may not be the deepest game ever, but it is a lot of fun. Every spell you cast sees the table laughing, or sometime recoiling in disgust depending on the name in question. It’s a quick playing game where the core is the creation of awesome spells with ridiculous names and if any of the pictures in this review have made you crack a smile, then I urge you to give it a try.