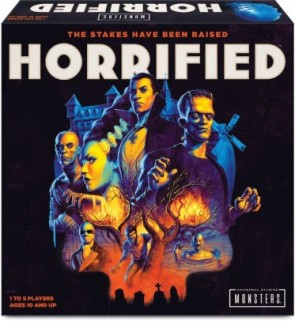 Sunday morning, everyone is awake an hour early because the clocks have gone back. As we open the curtain and gaze out on the leaden skies wetting the leaden streets with drizzle, we wonder why we bothered. A day indoors with early nightfall in the run-up to Halloween: it sounds like a perfect time to try new co-op game Horrified.

Opening the box we're greeted with a legend like a title card from a silent film: 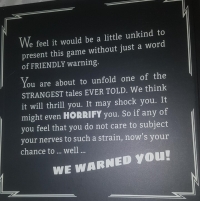 It's a lovely introduction. I read the text aloud in the gathering twilight and feel a little sepia tinge of nostalgia. Whenever I put the game away, I'm sure to keep that on top as a surprise for the next new player.

The youngest child doesn't like the name. Eldest, though, who dislikes spooks and scares, understands the difference between real horror and hokum and wants to play. We set up the starter scenario. Twelve items in red, blue and yellow get drawn from the shadows of the bag and each placed on its indicated location. Then Dracula goes into the Crypt along with one his coffins: others go in the Cave, Dungeon and, of course, the Graveyard. Finally, the Creature from the Black Lagoon starts at .... the Black Lagoon. And we're ready to go.

Beating them means collecting items. Red with a total value of six to destroy each of the Count's coffins then yellow to destroy the bloodsucker himself. Teasing out the Creature means spending items of different colours at the Camp space to advance a track, then using one of each colour to kill it. Items are also kind of like hit points: you have to discard one to survive a monster attack. So the first thing we do is pick some up.

At first, it's easy going. We draw a card each turn to add more items, an event and monster movement. The occasional vampire attack isn't a great threat to our piles of collected items. But it's weird how such simple systems and bendy plastics can generate such atmosphere. It's fun to run to the church and pick up a crucifix, then discard it to see off a vampire attack. It's kind of ludicrous to pick up a Kite from the Tower and use it to find the Creature's lair. The narrative writes itself and there are no clunky rules to get in the way.

Soon, a villager appears. Two, in fact. Wilbur and Chick who start at the Shop and want to go to the Dungeon. I want to make a joke about the kind of shop items that get delivered to dungeons which is too adult for my teenage playing partner. Later, I learn that all the characters in the game are from Universal movies. These guys appear in the comedy Abbot and Costello Meet Frankenstein and the Dungeon is a stand-in for "McDougal's House Of Horrors".

Monsters will move toward and can attack villagers who, unlike players, can't defend themselves. If one dies, the terror level goes up. If it hits six - or if the deck runs out - we lose and the monsters win. Players can move adjacent villagers and if they get to their favoured destination, you get a buff card as a reward. But it costs precious actions in which we're not moving and picking up items ourselves.

We do our best to shepherd Wilbur and Chick to their naughty dungeon. But soon other villagers are popping up and walking straight into the paths of monsters like the dumb hicks they are. The terror level duly ticks up. At the same time, though, it's easy to hoard items. My daughter's picked up a lot of red and is touring the board smashing Dracula's coffins. With a more mixed bag, I'm sat on the Camp spending them to advance the Creature's lair track as fast as possible.

When the end comes, it's a bit of an anticlimax. We were never under any real pressure at all. But this was the easiest difficulty setting. And there's no denying the rich flavour of cheese we've both enjoying while playing.

Wanting to try some tougher monsters in a tougher setting, I give the game a go solitaire. For some reason, this involves starting the terror track halfway up, which seems a bit unfair, but there we go. To increase the difficulty I add another monster to the starting to and pick The Mummy. He looks the most fun to me: to beat him you have to spend items to gain moves in a simple sliding puzzle. And he has a favoured player that he likes to attack if possible.

Since I'm playing by myself, that will be me.

Even though the higher terror level suggests solo play should be easier, I struggle to cover ground. With three monsters on the board and only me to shepherd the villagers, they're easy pickings for the horrors. Poor little Elizabeth gets kidnapped by the Creature and, ironically, Renfield gets his wish and gets bitten by Dracula. Whether it's what he would have wanted or not, the terror level still goes up along with the tension and I'm one away from losing.

I'm addicted to feeding items into the Mummy's puzzle like a slot machine. So when he catches me at the Museum and I'm out of items to defend myself, it's game over. And I'd read that this game was easy. 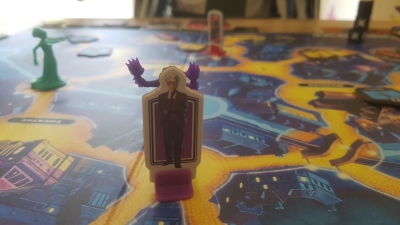 Both plays are practice for the main event which happens, of course, on Halloween. I rope the whole family in to play. We use Dracula and the Creature again, even though they've become a bit samey by now. Flicking through the options it feels as though it's going to be a similar story with the Invisible Man and the Wolfman: collect items, spend items, win. Although the Mummy remains my favourite departure from the formula, my family votes for the other option. That's Frankenstein and his Bride.

Double the trouble in terms of preying on villagers, the idea is that we have to stop them meeting until they've learned to behave. Teaching them, naturally, demands we spend items. Still, the idea has a lot of thematic appeal and everyone buys into it as soon as those green plastic monsters hit the board.

We soon learn to regret that thematic appeal. The deck seems stacked with early villagers and it's soon all hands to the crucifixes to try and keep them safe. One player gathers three in her space, shooing them like lambs and moving at a snail's pace, unable to reach a safe destination. Meanwhile, the monsters roam the board at will and we grub desperately for any items that appear.

The only thing that saves the game from spiralling into catastrophe is that when you "teach" Frankenstein or his bride, you can move them. We use this to keep them apart and away from wandering villagers. It lends exactly the right air of comedic concern to proceedings as we attempt to humanise the undead with test tubes and garlic. And for a while, in the middle of the game, it feels like it might work.

But as we creep around the board, escorting crowds of terrified innocents to their homes, a new threat looms: the deck runs thin. The game becomes a question of time, not terror, and the excitement lights up like a lightning strike on a lab pylon. The immediate danger is passed, we've got a stock of items and cards, can we do this in the remaining time with what we've got?

As we plan, Horrified is revealed as what it is: an action optimisation game with a brilliant and convincing theme. Yes, we're seeing if was can scoot around the remaining locations and get what we need to smash coffins and sympathise with flesh golems. But we're also seeing how best to do it with the resources and actions we've got. For a few turns, everyone is pouring everything they have into the game, totally absorbed. One turn from the end, the last piece falls into place: we're going to do this.

We play it out anyway because it's fun. Then it's high-fives all round before the magic is dispelled and kids drift away from screams to screens. But as I pack it away, making sure the caption is on the top, I know they'll be back someday. It's ironic, but a game about last-century horror films turns out to be exactly the thing to bring a modern-day family together.

ubarose replied the topic: #304325 18 Nov 2019 13:25
I agree, this is a fun family game. I am hoping to borrow a copy to play with my daughter when she comes home for the holidays. She will get a kick out of Wilbur & Chick. Abbott and Costello meet Frankenstein was one of her favorite movies as a kid.

The title card is not from a silent film. I think it was the ‘warning’ introduction played to audiences before the screening of ‘Frankenstein’ with Boris Karloff. Legend has it that some viewers did indeed leave. You can enjoy it on the dvd version. Hope this little snippet lends even more to the experience.
Read More...