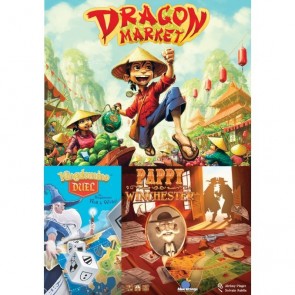 Blue Orange Games doesn’t put out the highest profile titles on the market, but what they do is really kind of unique. They are focused on titles that hearken back to the golden age of Eurogames - family friendly and singular designs that delight with clever mechanisms, charming components, and accessible gameplay. There’s a new crop of fall releases from Blue Orange out in the wild and thanks to their press desk ThereWillBe.Games got to sample their recent bounty.

Kingdomino was a big hit for Blue Orange and with good reason – the Cathala/Maublanc tile drafting and laying game won the SDJ and it’s enjoyed a couple of good expansions. The latest offering in the line is the two player Duel, and it is shameless hopping on the roll-and-write bandwagon. It’s a small, inexpensive offering that is just four dice, a scoring pad, and some pencils.

Conceptually, it shares with its parent game the notion of combining two offerings to make a whole. But instead of dominoes, you are “assembling” the piece with two die results. One player rolls four dice, drafts one, and the other player takes one. The second pick creates your figurative domino, which then must be used to fill in adjacent spaces on your map. Each die face depicts a different coat of arms, which is how contiguous regions are determined. Crosses on the die faces are this version’s analog of the score-multiplying crowns that increase the value of regions. Additionally, each coat of arm corresponds to a spell on the reverse of the map sheet, with tracks that are filled in for each die you choose. Once a player has filled up the spaces on their side of the spell track, they gain the advantage or ability on offer.

This is a very slight game, to be frank, and although the time I’ve spent with it has been enjoyable as a purely casual pastime. But there isn’t much tooth to it, and although the race to acquire the spells adds a little friction the game never seems to elevate itself beyond a minor diversion. A two player game of Kingdomino takes about the same amount of time and offers a much more engaging experience, which leaves this edition feeling decidedly secondary. With that said, perhaps its proper venue is not the game table but around a campfire, on a plane, or during a road trip.

There was a bit of unfortunate ugliness that preceded the release of Dragon Market involving a badly chosen and overlooked cover illustration that featured a stereotypical caricature of an Asian character. Blue Orange did the right thing and corrected the art, but I was still left worried that the game would feature the kind of regrettable Orientalism with which many European game designers have treated Asian settings, characters, and subject matter- the “coolie hat” meeples on the game’s boat pieces and the cartoonish font of the title didn’t bode well. But the good news is that, despite the dated presentation, Dragon Market is a harmless, inoffensive title that looks and feels like something Zoch would have released 15 years ago- when these elements of questionable representation rarely discussed as widely they are today.

The idea is that players are sending out an Heir to collect gifts for the soon-to-be-wed Princess Xue. The Heir must traverse Dragon’s Bay, collecting treasures and leaping from boat to boat across the waterways. But it’s a fluid situation – the boats slide and rotate, opening or blocking passages across the grid-based board. Each turn, the player rolls a pair of dice to generate the action points that will be used to move the Heir and also the boats. The boats move laterally in the direction they are pointing and pivot on their Captian meeple, which is fixed to the boat piece and cannot move. Each player must complete their objective card or cards (in the advanced game) to win by gathering the requested treasures.

What makes this game fun is the puzzle that emerges each turn as players shift the boats around to suit them, invariably making your errand more difficult. You’ve got to work out the best ways to get to where you need to be, which sometimes can look impossible at first glance. But then you sort out that turning this boat, moving that one three spaces, putting your Heir on it, and then moving it another two spaces will put you right where you need to be. Some folks don’t like this kind of gameplay, but those that like volatile, changing situations and figuring out best solutions will. It’s not a nasty game at all, but the easily frustrated (such as small children) may get aggravated when their long-term plans are completely shot to pieces by the time the turn comes around to them.

I like this game and have had a good time with my family playing it, never the basic game and always the advanced option. The advanced rules give it just a little more punch, with each objective featuring a bonus ability when it is completed. The rules are not more difficult or complex, but the range of bonuses gives players just a little more to consider when they go about their mission.

An easy-to-play auction game that is suitable for kids, Pappy Winchester is the kind of design that doesn’t blow you away but nonetheless leaves you with a smile. It’s the kind of good game that does absolutely nothing innovative, arch, or daring. Think of it almost as comfort food.

And nothing gives me greater comfort than an economic game that has paper money rather than chits, tokens, sliders, or other pitiful excuses for cold, hard cash. The concept here is that the mining and ranching magnate ol’ Pappy Winchester has died and his heirs, the players, are squabbling over his legacy. But he wanted his money to stay in the family, so in this game you pay the other players for the assets you win in the auctions, which makes for a great sense of tension as you decide just how much you want to enrich your rivals to get what you need.

The board is divided up into land plots along a river and a rail line, and each turn one of the plots (along with a bonus token) is randomly selected for the auction.  And the high bid is split amongst the losers, so astronomical bids are ill advised. Anything left after the equitable split goes into the Saloon space on the board. This is really all there is procedurally to the game – everything else has to do with accomplishing shared and private objectives. They are the usual (and frankly too common) kinds of objectives seen in games today – have plots of different types, collect different tokens from the different kinds of land, points for plots that don’t touch the river, bonuses for each Desert plot at the end and so forth.

But Pappy’s “small print” includes some of the more interesting game elements. There are duels, which are kind of ineffectual but fun nonetheless, wherein once per game an auction showdown between two players can be resolved with a card flip shootout. The Ranch and Mine spaces have a surprise cash award that you can peek at if you use a rumor token you’ve acquired. Movement tokens allow you to move an adorable 3D cardboard train or riverboat, offering a $1000 payout to plots adjacent to where they go. And if the Saloon starts to get flush with tips from auction split overflow, spending one of those tokens will net you the entire pot.

These touches are what make Pappy Winchester an appealing auction design. It’s not as watertight or as finely tuned as the best examples of the genre, but it is perhaps easier for younger players and more casually inclined players to grasp than something like Ra or Modern Art. There’s an immediate sense of reward and valuation without complex scoring schemes or long-term projections required. I’m not sure I’d reach for this game over either of those Knizia classics, but it’s a nice halfway point between more kid-focused design and higher end Eurogames concepts. I would advise, however, that 3 player tables look elsewhere – this is a game that needs 4-5 players to generate the right amount of competition and dispersal.

Thanks to Blue Orange Games for supporting good games writing here at ThereWillBe.Games. These titles were provided for review by the publisher. ThereWillBe.Games never accepts payment for any type of content that we present.