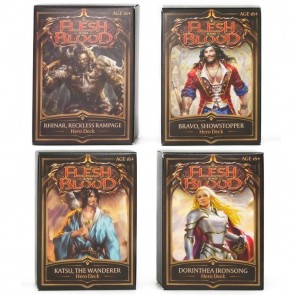 Not the type with pompous introductions or the ridiculous larger than life characters. It’s Olympic wrestling. Two people using their brute strength to grapple and pin each other. Using everything to gain a slight advantage but one slip in technique, or a loss in concentration is all it takes to lose.

Each card in Flesh and Blood has a cost, and a pitch value. During your turn you can pitch a card (temporarily discard it) to gain that cards pitch value. This can then be put towards the cost of other cards. Creating a tension of what to play, and what to discard. I’ve seen this mechanic in other games, such as Jump Drive, and I loved it then and still love it now.

Here it goes a step further.

As cards can used for their attack, pitch value, or defence. Defending is free. But using cards up is always a tough decision and depending on the card it can make you feel like you’re giving up your first born. 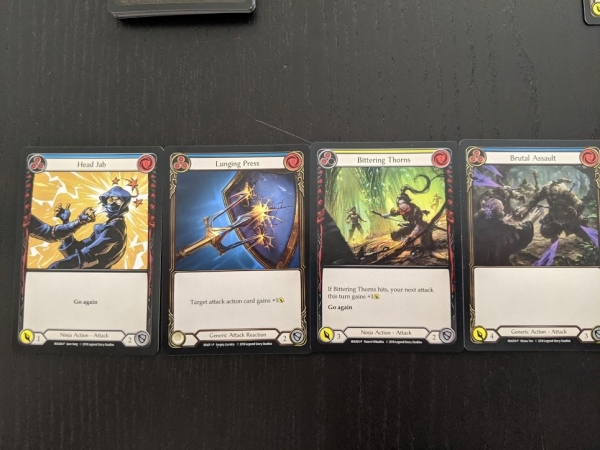 With the different heroes comes different hand limits; for me, I had a hand limit of four cards. Four cards for both my opponent’s and my turn. Meaning while I started with a hand of great combos, figuring out how I to pay for it, and how to defend against my opponents Kamehameha challenged me constantly.

This is Flesh and Blood.

A constant stream of tactical decisions, where you decide how much damage you’re taking, and how much you’re dishing out. Then, when the dust settles, you draw back up to your hand limit and go again.

Flesh and Blood advertises itself as a game of heroes who’ve already levelled up. Meaning you don’t spend time building your strength, or your economy, and can jump straight into punching your opponent’s face and laying down some sweet combos.

These combos are made all the sweeter by the introduction of the Arsenal. A pocket where you can store one card for a later turn, effectively increasing your hand limit. This does restrict the card from being pitched or used for defence. But it opens a whole lot of surprise moments. 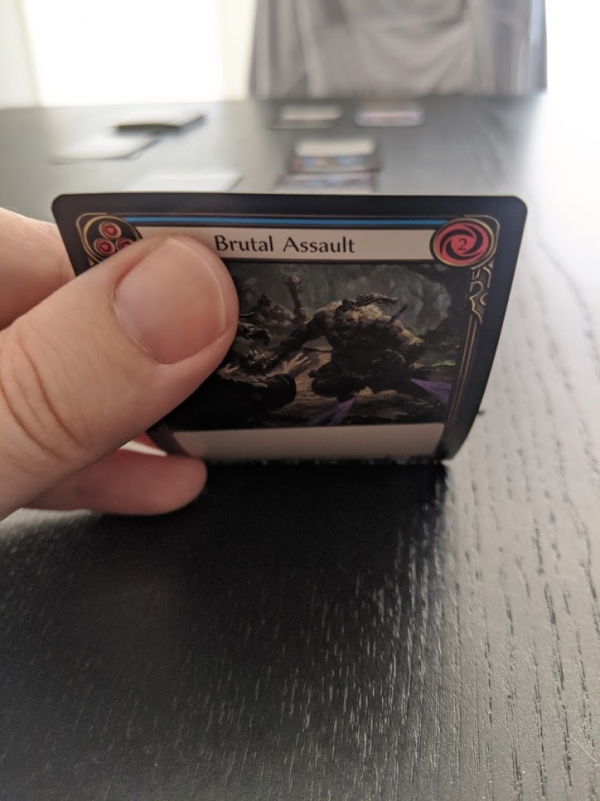 A brutal assault in my pocket.

Putting together these combos was the high point of the game. The character I played was Ira, Crimson Haze, a ninja capable of chaining her moves together. It felt great. Much like pulling off combos in a fighting game, or Neiji’s 64-point strike.

The downside to this system is that since it heavily encourages you to spend your cards each turn. It removes a whole dimension of economic deck building strategies. As well as limiting overall deck building possibilities, as you’re no longer able to build your deck for early, mid, or late game. Or build any form of long-term strategy or around a combination of cards.

But there’s an upside too. It makes the game simpler.

The last physical competitive card game I owned was Android Netrunner. I loved it, but it took a four-year university degree, and two years work experience to learn the rules. Because of that I never got it to the table and ended up selling it. Flesh and Blood doesn’t have this problem. It has just enough rules to make sense, and then let’s the cards do the talking. Making it incredibly easy to shuffle up and play a game.

This may be a turn off for more hard-core gamers, but it shouldn’t be. Because this game offers a lot of nuance as well, especially around tempo. As you’ll find in playing, you pulling off a great attacking round, forces your opponent to spend all their cards defending. Giving you another opportunity to attack next round. However, them willing to make a health sacrifice can easily put you in the same position.

Before I start wrapping up this review, I want to give a shout out to their business model. I was ready to lambaste this game for being a trading card game in a world that I feel has largely moved on. However, I can’t. They’ve made a smart decision to not only sell booster packs, but also sell character decks from the get-go. This means that less competitive gamers like myself can still have fun and enjoy the game without spending half my salary every month. And for a game like this that’s awesome. 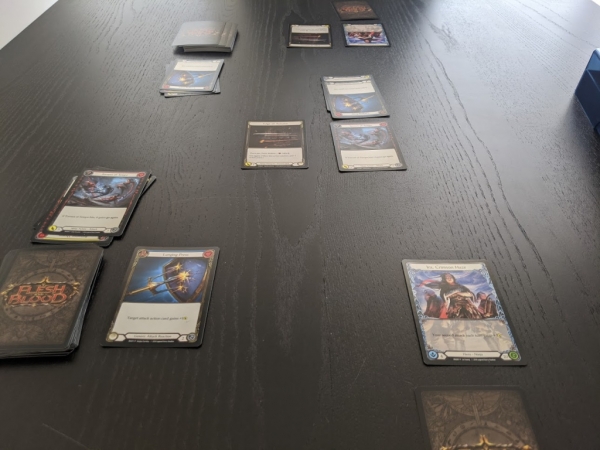 Mid game, I’m chipping away with my weapon. I won this game with 2 life left!

Now it’s time for a disclaimer.

First, I got the starter decks for free for this review, but more importantly, I was only provided the starter decks. As such it was only one hero, and it was missing equipment cards, as well as any additional cards that would really let me delve into deck creation. Which is unfortunate because TCGs live and die on personalizing your own deck and modifying it to suite your playstyle.

This puts me in a weird position. I liked what I played. The card art is fantastic, the mechanics are interesting, it’s everything you’d want out of a tactical card game. But because I didn’t play everything, or at least enough of it, I can’t give it the glowing two thumbs up. Instead, what I can say is that it’s worth more investigation. They’re currently holding competitions worldwide(https://fabtcg.com/), so when it comes to my town I won’t compete but I’ll be at least picking up a couple of hero decks. 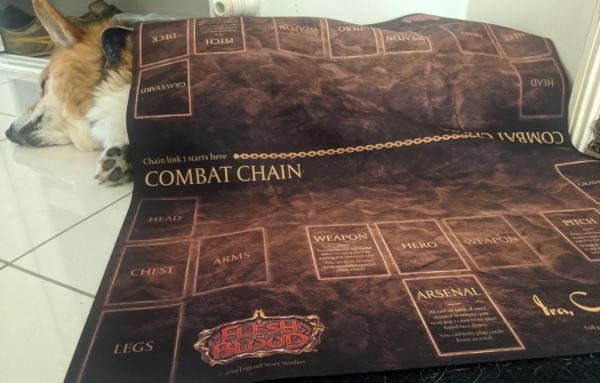 Chester did not approve of us playing on top of him.

DarthJoJo replied the topic: #304425 21 Nov 2019 14:35
Funny to see you post this as I've spent the past few days looking into it after finding a deck at a friend's house. Checked out their site, and it turns out they sent an introductory package to the local Magic shop. The owner hadn't opened the envelope until I asked him about it today. Now he's ordering some boxes and starter sets. We'll see how it goes. Be nice to have a new competitive game since the Thrones LCG is ending.

There's no such thing as accidents!

Hope you enjoy it as much as I did.