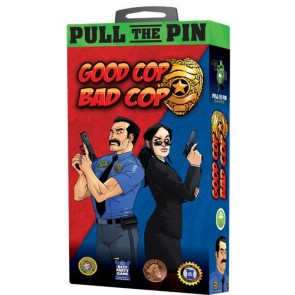 Narrator: In the criminal justice system, dirty cops are considered the lowest of the low. In New York City, the dedicated detectives who investigate these betrayals of trust are members of an elite squad known as Internal Affairs. These are their stories. * Dun Dun *

GC: Look kid, you gotta give me something to work with. BC is going to be in here soon and he doesn't play around. You are on your third edition here, so I know you are trying and maybe you have something going for ya. But Four to Eight players is pretty standard fare for a party type game...

BC: So here is the perp. Surprise, surprise...looks like we got another take on Mafia... 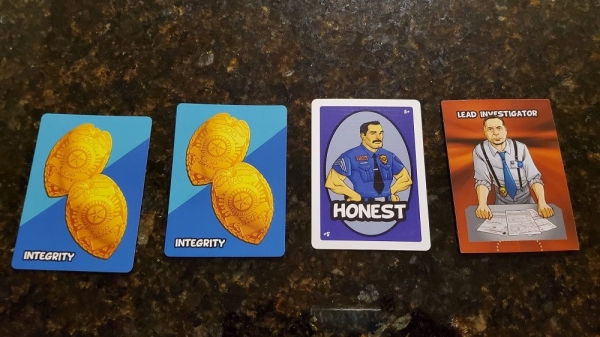 BC: (Looks at paperwork) Third edition, huh? What's different from the Second Edition? The only thing I can see is that you have this fancy, smancy “Pull the Pin” Box.

GC: Well, that does mean it is compatible with the previously released expansions...

BC: Expansions? You're talking expansions when we haven't even decided if we even like little old base game here!* gets in the perps face * I hate liars. So, I'm going to hate this game, aren't I punk?

GC: In fairness to the punk, sorry, game. You can play without actually lying. My daughter dislikes games where she has to lie. In this one, she never lies. I mean, I can't suggest you play with an entire crew of players who don't want lie but you can play, and win, without bending the truth.

BC:Listen to the words coming out of my mouth. IS. THERE. AN. ACTUAL. GAME. HERE? Cause I'm dead tired of this “Deduce who I am with no actual information” crap.

GC: That's what I've been trying to tell you, BC. It is team based. It's Agent versus Kingpin. Using three cards instead of one to define your role gives plenty of opportunities for deception. Whichever cards you have the majority of defines which team you are on. Unless you have the Kingpin or Agent cards, then you are that team's leader. So, you can have two bad cop cards and the Agent card and, though playing the game you end up revealing the two bad cop cards, one would probably assume that you are one of the Bad Cops. Instead, you are the leader of the Agents. More importantly, in my eyes, is three card set up gives you a chance to change roles...or seem that you have changed roles...mid-game.

BC: Hmmm, it does look like everyone has a actual, active role in this game. There are no villagers/sheep in here. Everyone can pick up a gun and start plugging police and see if they bleed blue. What about recovering from a blunder within the game, is that possible? 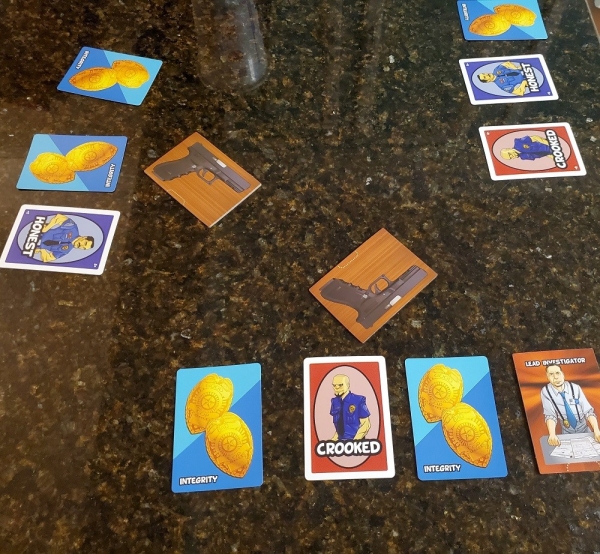 GC: Let's say you make a mistake early, flipping over one of your three cards to, Oops, reveal that you are the Agent. It's game over right? Not necessarily. I've literally seen it happen. With some fortuitous luck and some brilliant plays using the item cards, the agents were able to target the suspected kingpin with their guns, reverse the play order, fire at the Kingpin, recover from a Bad Cop blasting the agent with a First Aid card and topple the kingpin with a second shot.

BC: Fine. Whatever. What about player elimination? I don't want to sit around half a game with my thumb up my ass with nothing to do.

GC: I'm glad you asked. This is where equipment can really come in. Let's say I decide that you are the Kingpin * Pulls Gun and shoots BC, Who promptly drops to the floor: dead * And when you flip over your cards it turns out that, oops, you were actually on the Agent side. We could play the Defibrillator card * Electrical Sound * and Bam, you are back in the game, no longer eliminated. 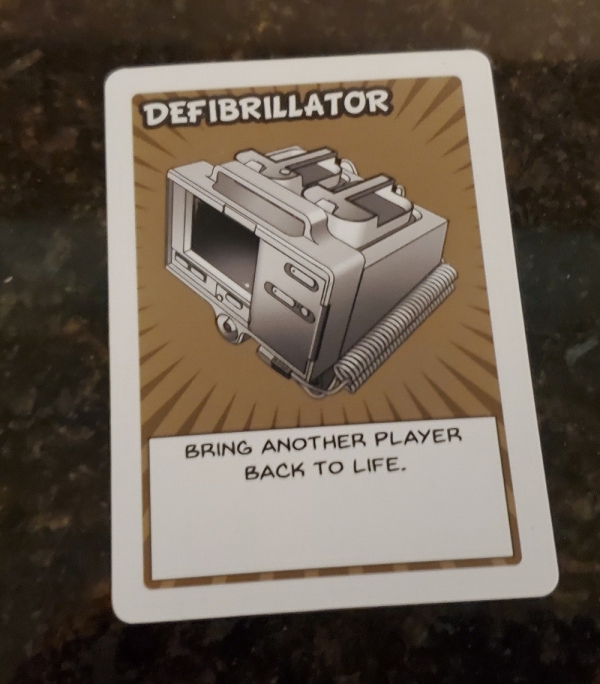 GC: * undeterred *...and the riot shield allows you to deflect a bullet aimed at yourself. Instead, it hits one of your neighbors. * Guard at the door falls over, dead * Sorry Frank.

BC: * breathing heavily * Fine. You've convinced me. This is a intriguing take on Werewolf...

GC: Sorry about shooting you earlier Sam but, it turns out * flips over Kingpin card and cocks gun * I'm kind of a bad guy. 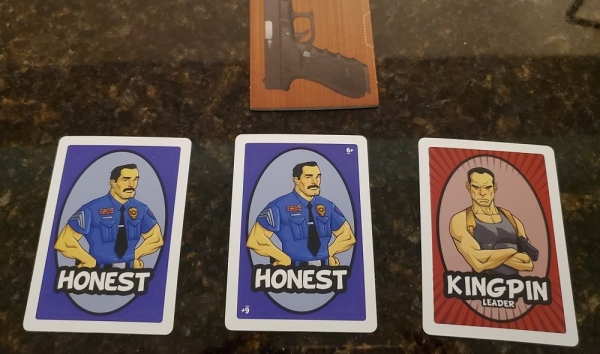 This maxes out at 8?

(Also, I believe it is spelled, CHUNG CHUNG)

Jackwraith replied the topic: #304602 27 Nov 2019 09:46
Thanks, again, for taking the bullet on these... I've only played a Werewolf-style game once and it was pretty meh. This sounds like they're adding some degree of complexity to elevate it past the usual, but it doesn't really work?

WadeMonnig replied the topic: #304608 27 Nov 2019 13:12
Actually, it's a good take on werewolf. We enjoyed it. Make sure you check theTWBG star rating system to understand how I come up with my ratings for each game. therewillbe.games/submissions/star-rating-key
Read More...