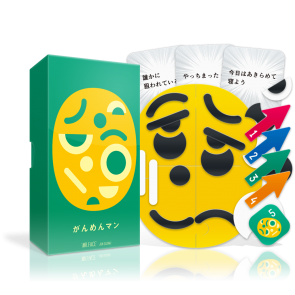 When was the last time a board game made you laugh? Like full on wheeze-laugh until you have to force your lungs to behave? And to be clear, I don't mean your friends did something funny. I'm asking you to come up with a time in which the actual box of bits itself managed to be genuinely hilarious on its own, with no input from the players whatsoever.

Mine was last weekend. Lemme tell you about Mr. Face.

Mr. Face is another cute little box from Oink Games. It's also a party game, meaning it warrants comparison to their other entries in the genre like A Fake Artist Goes to New York and Insider. Both of those are excellent and Mr. Face is no different in that regard. But where Fake Artist and Insider are both social games with some deduction and suffer from the inherent fragility of that genre, Mr. Face is as close to a bulletproof party game as I can imagine.

Each turn the facemaker draws a card with some kind of goofy phrase, like "I slept great!" or "I don't know any of these people". They then get 100-ish seconds to assemble a matching face. I say 100-ish because the game comes with no timer. Instead, the rules recommend having all non-face makers take turns counting until they reach 100. I've found that most groups I play with don't have the patience for that specific rule but it's pretty darn funny at least once. Anyway, the face maker has a collection of double-sided shapes to play with. They're simple and easy to layer and make all sorts of expressions with. Most of the 80 phrase cards are easily understood but open ended which has two benefits: replayability and misinterpretation.

Once the face is done the other players get a chance to bamboozle each other. They each select another phrase card from their hand and shuffle them together with your original one. Then, if you're at less than 6 players, the game adds enough to get you up to a pile of 6. This step is essential. Mandatory. It's what elevates Mr. Face from an entertaining activity to one that's actually memorable. One by one the facemaker reveals the cards reading them aloud, ideally in character. The other players each select one of the phrases as the "right" one and the facemaker reveals the correct choice, giving points to the players who got it right and receiving points for each player who nailed their guess.

Normally I don't bother going into rules in this much depth, but I had to for this review because I'm going to do something unprecedented: recommend variants. By default the above is the only way to score points. I highly, highly recommend rewarding players who successfully fooled others with points too. Plenty of other party games do this (notably the Jackbox set) and it dramatically improves the experience as everyone gives their full attention to every turn. And if you want to play Mr. Face in optimal conditions, do the same for the game itself.

Because the cards are so easily misinterpreted it's very rare for the facemaker to win unanimous guesses. Players can pretty easily throw each other off. But you're forced to play cards from a limited hand which means your options don't always make the most sense. As such, when playing at less than maximum player count the game's automatically added cards can run the gamut from hilariously, obviously wrong to more covincing than the original card. It's fantastic. Of course the game loses nothing when played at it 6p (and of course can go higher if you ignore the box's suggestion), but rare is the party game that not only functions but actually succeeds at lower counts. When I opened by saying that Mr. Face itself is legitimately funny, that's what I meant. Mr. Face itself is damn good at his own game. In a recent 4p play we had more than one round where the game claimed the majority of the guesses, and one in particular where it swept the board. No points for anyone, all glory to Mr. Face, long may he reign.

A lot of party games have a tendency to break. Spyfall demands improv skills from its players and occasionally completely unravels when the spy gets questioned too early. Fake Artist and other drawing games demand a certain amount of skill that not everyone possesses, and sometimes have component issues. Apples to Apples and its progeny are all about trying to entertain the judge which just isn't always possible, leading to occasional dull rounds. Performative charade-based games are a whole other can of worms that some people just can't do. None of these failings are crippling to their corresponding games but they mar what are otherwise strong experiences. Mr. Face, incredibly, dodges all of these pitfalls with the finesse of an olympic gymnast. It's so simple yet so resilient, never failing to entertain every player at the table. Packing all of this into an Oink-sized box is a feat. As far as party games go you'd be hard pressed to find a more reliably entertaining thing.

cdennett wrote: Hmmm, basically this is reverse-Dixit, where the word-clues are given and you create the art. Sounds neat, though not sure I'd ever get it played. Might be a good gift, though...

I'd say that's accurate. In the same way that Fake Artist was a better version of Spyfall Mr. Face does Dixit a bit better. You'd think the phrases would get stale but they really don't since those aren't really the focus of the game.
Read More...