In the Shadow of the Colossus: A Skulk Hollow Board Game Review 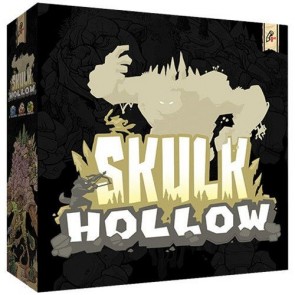 I hate lazy game comparisons; they never do justice to either the source game or the game you are comparing it to. But Skulk Hollow's emulation of the now classic video game trope of the heroes scaling a monolithic “villain” to defeat it is hard not to acknowledge. This is actually one of the trepidation's I had about Skulk Hollow: As much as I love Gunstar Heroes, Lunar: Silver Star Story or Front Mission 3, I rarely go back to a specific battle (No matter how epic) and replay it over and over.

But let's not get ahead of ourselves: Skulk Hollow is a two-player game which pits the Foxen Clan versus a variety of asymmetrical “Guardians.” The combat takes place with players using action cards to summon units, move them, and use special abilities. Taking down a guardian requires the Foxen player to leap from the main board onto the Guardian side board and take out different parts of the character. As the parts are reduced, so are the Guardian's attacks and, in turn, the choices the Guardian player can make. 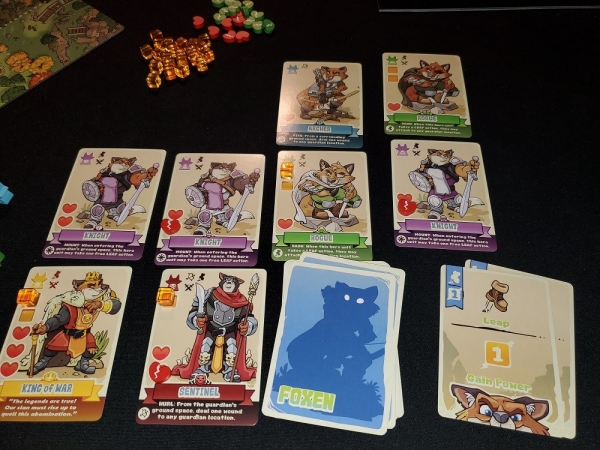 I enticed my oldest daughter into playing Skulk Hollow with me. Honestly, it wasn't too hard. The game looks incredible. Or, as my daughter put it “It's Pretty!” We used the suggested set-up for our first game with myself taking control of Guardian Grak and my daughter controlling the Fox Clan with the Foxen King of War giving the commands to his troops (As opposed to the Foxen King of Cake who was obviously out having dessert somewhere). Forty-five minutes later, Grak lay defeated at the hands of the Foxen and they returned to their castle, carrying their king on their shoulders to the cheers of the citizens. (My daughter is a bit...dramatic...when she wins.). 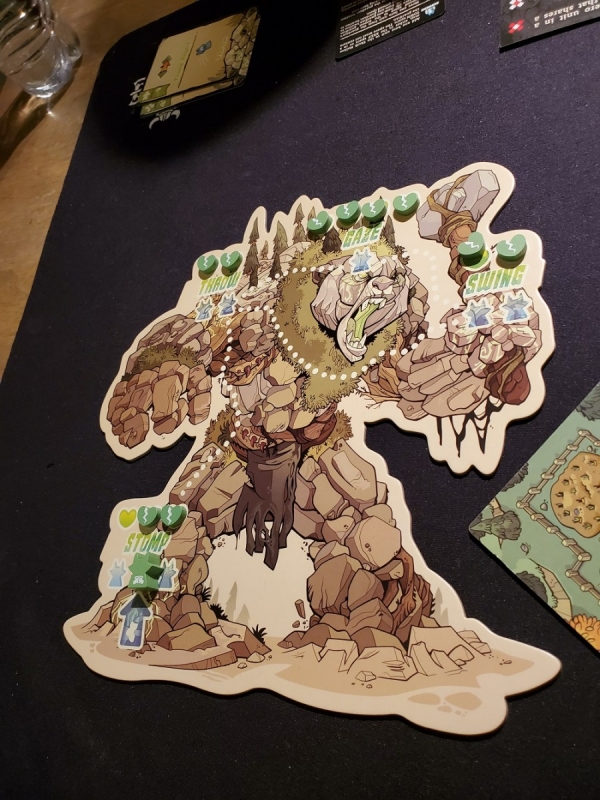 In most of my games of Skulk Hollow, I felt like controlling the Guardians was like being in command of submarine that is taking on water and headed to the bottom of the ocean. “Fire off gaze!” “Sorry sir, Gaze is currently not in working order.” “Stomp those little Foxen to give me some breathing room!” “Sorry sir, Stomp is out of commission” “Well, grab one of those furry little suckers and toss him across the map” “Well, our left arm hasn't worked since about round 4 so, I don't think that is going to happen.” Once you start fishing to draw healing cards into your hand with hopes of restoring some of your attacks, it is like everything is over but the crying. 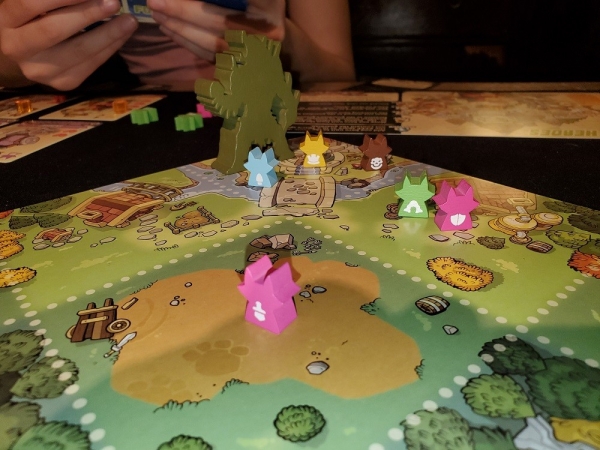 I will be the first to admit that maybe I just suck at playing Skulk Hollow. But after a half dozen games, my Daughter was tiring of playing as the Foxen. Even after switching which leader was in charge of her troops, she was weary of playing as the Foxen. To quote her “It just seems like I set up the same combos over and over and you really have no recourse other than to simply take it.” So, we switched sides and, surprisingly, (considering I was exact opposite of undefeated when playing as the Guardians), I won my first game. While I can't say we played as all the possible combinations of Guardians and Foxen leaders, it just seemed the Foxen are just too powerful. And, despite the game being asymmetrical, no matter which leader that was picked for the Foxen, after the first few plays, they feel a bit repetitive. The vast majority of video games feature the player as the protagonist, (which we assume are the Foxen in Skulk Hollow) and the AI controls the antagonist. In the end, after various hard fought battles, the protagonist inevitably win. And that seems like what happens here. While that might be fine with playing against an AI, it's none too entertaining for the player controlling the Guardians in this game. 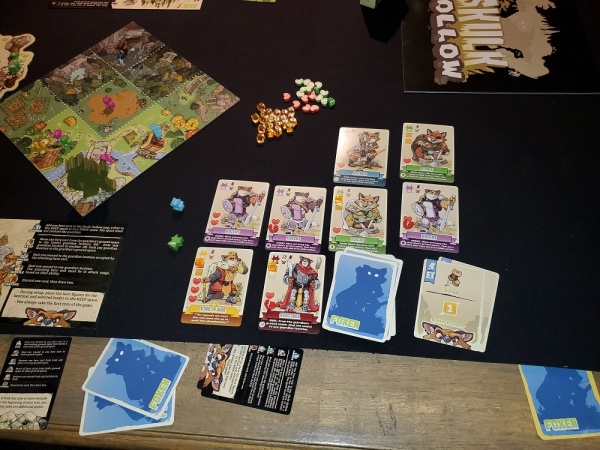 The instruction manual, while large and aesthetically pleasing, comes up short on giving concise and easy to decipher instructions. Take Grak's Gaze it states “deal one wound to any hero unit in a surrounding ground space that shares a side.” At first, I thought this was an AOE attack because, come on, what big, bad, baddie doesn't have an AOE attack? However, upon further review, it seems that gaze only hits one Foxen, you just get to choose which of the heroes in a surrounding ground space you wish to hit. Granted, some of the other guardians do have AOE attacks but Grak does not. Also of Note is that the main game board is a square but is set-up as a Diamond in the middle of the table with the castle facing the Foxen player and the Ruins facing the Guardian player. However, the player aids show the movement and attacks as if the board was set-up as a square in the middle of the table. So, you are constantly rotating things in your mind in order to determine what spaces you can actually engage with or move to. Also, and I will fully admit this falls into my “I always get one rule wrong” flaw, it took us a few games to realize that you do NOT have to spend cards when you are using power cubes to activate bonus actions. Instead, you can simply take any of the actions listed on the card that contains the power cubes. 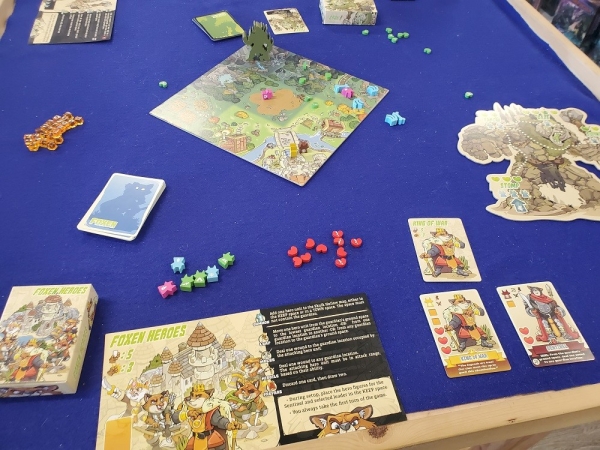 Getting back to the video game analogy: I have played Skulk Hollow more than some of my favorite games this year, which has to be a testament to something. Each Guardian was interesting to learn. However, at the end of the day, I felt like my role as the “Baddie” was simply to, all too rarely, make my opponent face a “You have failed this stage. Retry?”screen. To me, the credits have rolled on Skulk Hollow, the Foxen have reunited the Woodland of Bore, and we will never know if the Guardians were Mother Earth rising up to protect herself or simply a corruption of nature. I have no real desire to return to it other than a somewhat morbid curiosity to see if the Foxen are overpowered (as I believe) or that I simply sucked as playing the Guardians (always a possibility). As an adventure, it was a success, but as a long term game that I would return to over and over, it doesn't quite stack up.

November 27, 2019
Rating
3.5
Skulk Hollow
To me, the credits have rolled on Skulk Hollow, the Foxen have reunited the Woodland of Bore, and we will never know if the Guardians were Mother Earth rising up to protect herself or simply a corruption of nature. I have no real desire to return to it other than a somewhat morbid curiosity to see if the Foxen are overpowered (as I believe) or that I simply sucked as playing the Guardians (always a possibility). As an adventure, it was a success, but as a long term game that I would return to over and over, it doesn't quite stack up.
W
WadeMonnig Top 10 Reviewer 195 reviews

Gary Sax replied the topic: #304756 04 Dec 2019 09:22
San Il Defanso had a discussion about OGRE in his recent why do I own this column that reminds me of your review, and especially its discussion of the giant's role. My recollection is that the OGRE also has a really good chance to win the game too but I don't remember well.

ubarose wrote: Well that is a shame. This game looked like such a promising (and really pretty) two player game.

If you approach it as an adventure that you are going to play a half dozen times, it is a success. I just don't know think it is balanced enough to return to over and over outside of the adventure context. It is a gorgeous game, the guardian meeples are top notch!

Do tell! Did you find the foxen overpowered?

charlest replied the topic: #304765 04 Dec 2019 16:06
We found it relatively balanced (Grak feels weak though). My biggest complaint is that it's a bit repetitive and moves tend to be a bit obvious.

Vysetron replied the topic: #304766 04 Dec 2019 16:36
Yeah, balance wasn't our concern as much as it being attrition-focused and spending half your time drawing cards. Was a real disappointment for us in that regard.

Matt Thrower replied the topic: #304813 06 Dec 2019 04:28
I've also played this: might review it at some points. Some of the match-ups do feel quite unbalanced, although others seem better. The worst is Grak, which is touted as the learning scenario.

If you go on BGG the designer is in a few of the balance threads explaining how to play Grak "properly". No-one's had much luck with his advice and neither have I. The fact he's defending it, and that it's set as the introductory match-up, sets alarm bells ringing about how well this game was playtested and developed.

That said, I have to admit that it's still good fun to play. It's got that puzzle-y feeling with each matchup where you're both trying to work out how to leverage what you've got to win. That, and the fun of figuring out how to best use your hand of cards, make it a bit addictive. Even if each matchup is only good for a couple of play, that's still more play time than a lot of modern titles see.
Read More...