Magnate: The First City Preview - More Than Just a Paycheck 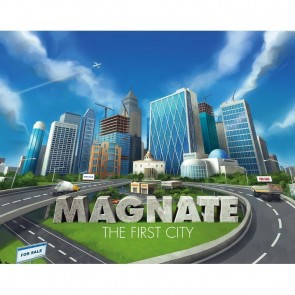 Mogul Simulator with a twist.

Economic board games have a unique messaging problem. The obvious example is Monopoly being repackaged as an ode to cutthroat capitalism as opposed to an indictment, but even a cursory glance at the genre reveals that it’s mostly about dancing atop your newly minted fat stacks rather than what you actually did to get there. This is, of course, not without reason. Playing a cutthroat mogul is fun! Buying low, selling high, and waving cash around to prove your superiority is innately satisfying. Distilling that into a game, therefore, is usually fun. But that doesn’t mean we can’t have games that offer all of this with a critical edge; games that demand we ask questions of ourselves that would otherwise be ignored. Enter Magnate: The First City.

Magnate has a simple premise. What would happen if a town just decided "You know what? Screw regulations, we want a huge city. Build wherever." And Magnate offers an answer to that question: an inevitable and violent crash. Remember the 2008 US recession? It's that again but worse, and everyone at the table knows it's coming. From the moment everyone sits down at the table you're agreeing to destroy this town so you can top off your respective fantasy bank accounts with that papery goodness that you crave. Bleak, but an excellent hook. Get in, get paid, and get out, ideally while getting paid again. Such is the life of a mogul.

Armed with a small nest egg of two million dollars and no regard for the wellbeing of your tenants, players start out by building various features and attracting suckers to rent ‘em. From there you’ll use the generated income to build new buildings and attract new tenants, and perhaps most importantly, sell ‘em when you think it’s time to cash out.

Of all the things Magnate does right mechanically, and there are many, this is the -most- right. Timing isn’t just key, it’s life or death. There may be situations where you just need cash and don’t feel like taking a consult action, but more often than not your sales will be the direct result of speculation. How much more money can this building generate? Are my opponents going to build a bunch of garbage around it? Is the crash nigh? I mean it’s always nigh, but HOW nigh? If you hang onto it a bit longer and it doesn’t crash you stand to make even MORE filthy lucre, but if it crashes you’re leaving all of that potential on the table. It’s a game of balance on a knife’s edge that demands you take decisive action, lest you fall straight down the middle.

That’s a very zoomed out overview because I want to focus on what’s arguably even more important: the post-game. There’s a brilliant moment that happens as soon as the scores are tallied up where everyone looks at what they’ve built and realizes what they’ve wrought. You’ve built a bunch of metal mountains, yes, but you’ve left this community in financial ruin. Not your ruin of course - YOU’LL be fine - but the city everyone’s responsible for creating is always a bizarrely laid out mess built on shattered bedrock. Make no mistake, your “game” has ruined this town. And it was all for petty cash. The game does not reward making tenants comfortable, only luring them in. It’s a subtle message compared to most games that want to make a point - Train comes to mind - but that subtlety is an incredible advantage. Players are easily brought in with the base premise of “you build things and make money” as usual, but Magnate is so brutal in its messaging that by the end it can leave you feeling grimy. Like you’ve done something wrong and even worse, you enjoyed it. Look at those fat stacks!

Magnate is a good game, but that alone isn’t what makes it stand out in the modern market. What elevates it and makes me comfortable recommending it is that it manages to balance a solidly entertaining core with an uncompromising viewpoint on its subject matter. It’s a thematic game that executes on its premise not by asking it players to read blocks of text explaining how they’re supposed to feel, but rather through its play. Everyone knows exactly what they’re in for from the moment they sit down because it doesn’t need to rely on tricks and subversion to make its points. You’ll play it, and enjoy it each time despite the endgame gutpunch, because the life of a mogul is an attractive one as long as you completely ignore the consequences of your actions. Unchecked capitalism is a blast when you’re the big fish in the unassuming pond, and Magnate delivers on that in spades without being afraid to show what makes it ugly.