The Long Shadow of Shadows of Malice 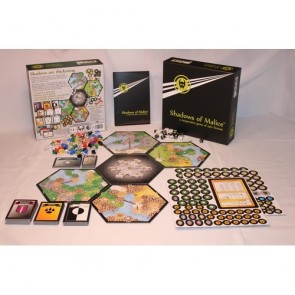 One of the decade's best games is back.

Five years ago, I saw the box cover of Shadows of Malice somewhere. I don’t even remember where it was. But it was striking -  stark black and electric green, with an iconic monster symbol. Those of you who know my aesthetic tastes will understand that a surefire way to get my attention is with minimalism – and the more black space the better.  I had no idea who Jim Felli was at that point. I had never heard of “Devious Weasel”. But as is the done thing for game reviewers, I sent an email and asked for a review copy. Jim agreed and I promised a review at my Website at the time, No High Scores.  He responded:

“Your copy of Shadows of Malice should arrive today or tomorrow. It has come to my attention that the copy you were shipped had been in a carton in the trunk of a car all winter. I do not know whether that has had any ill effects on the game components. If you find any quality issues with your copy of the game, please let me know and I will send out a replacement”.

So it did in fact arrive as expected and without any abandonment or exposure issues. But as I opened it up and looked over it, I had a dreadful feeling that my fellow games writers likely know all too well. It’s that feeling of “oh shit, why did I request this?” It’s a regretful sense that you are on the hook to review a game that you have doubts about. I flipped through the rulebook and my mind reeled. I thought it was going to be a complete mess.

But once I got stuck in, something truly magical happened, something that doesn’t happen often in modern games. The designer was trusting me to use my imagination in using his raw materials to generate setting, narrative, and drama. It was fantasy but cut more from the Wolfe and Vance cloth than the Tolkien and Howard cloth. I rolled up random creatures to battle, and imagined what they looked like. The material is intentionally vague, but not abstract – you are not a fighter, wizard or thief. There are no goblins, orcs, or dragons.

The game was making no attempt to dictate the specifics, apart for some magic items and skills that you can acquire for your Avatar. Rather than trying to tell a crap high fantasy story with illustrations and nomenclature, this game was giving me a framework to play with in a way similar to how RPGs invite us to build and inhabit a world. And this made the game feel quite alien, especially given the prevailing design sensibilities of the past decade.

Yet it was also familiar- the standard co-op fantasy adventure tropes are there, even if obscured. And it really is a game not too far removed (at least at the highest conceptual levels) from Runebound. After a few games, I felt like I was playing a mirror universe version of Magic Realm. Whereas Hamblen’s masterpiece was concerned with meticulous simulation of the roleplaying experience, Felli’s design is more about the tone, atmosphere and wonder of weird fantasy. It makes me think of being a kid and looking at pictures from the original D&D books, my imagination fired up by illustrations of Displacer Beasts and Mind Flayers drawn by Otus and Trampier.

It is a longer, fussier, and more idiosyncratic game than many gamers today have the patience for. But if you trust it – and you trust what Jim is doing with this game – it emerges as a brilliant adventure game like no other that dares you and challenges you to engage with it a deeper level than what is usual.

Regardless of my glowing review at the time – and later opinions from noted games writers like Theel and Owens – the game fell out of print and Devious Weasel moved on to produce other weird, esoteric games completely without crowdfunding. I have to admit that I sold my copy, along with the must-have Seekers of a Hidden Light expansion during that time. As Krusty the Clown once said, “they had a dumptruck full of money”. I never regret selling games, but as I played other adventure titles over the past few years my mind always turned back to Shadows of Malice. And I missed it.

Now, here at the end of 2019, Devious Weasel has brought the game back into print with a couple of minor revisions and you can buy it from online retailers or directly from Jim. He was kind enough to send me a new copy and I told him I would happily write it up again to help get the word out. Getting a new game in the mail is to be frank usually a shoulder-shrugging event after years and years of review copies, but I was ecstatic to get this package. I kind of just wanted to hug it, to welcome it back home.

I don’t ever re-review games, which is why this is more of “my life with Shadows of Malice” piece. But this is a five star game all the way, one of the most compelling and maverick designs of the past decade. It changed the way I think about games, and it is one of the reasons I am not impressed at all by these kitchen sink Awaken Realms kinds of titles loaded with miniatures, cards, expensive artwork, and so forth. This game does it all better with so, so much less bluster and bloat. This game stokes my imagination in a way that no CMON title ever could.

Yet it will not feature heavily in the “best of the decade” lists that we are sure to see rolling out from content creators over the next several weeks. Some readers might pick up a copy after reading this and wonder what I was on about, bemoaning all the dice-rolling and idiosyncrasies that position this design as an outsider work. Others may complain about the “cheap” production as it features very little art and very basic components. But these people are missing the point. And I would also wager that game players from the pre-Kickstarter era are more likely to be receptive to what this design is trying to accomplish.

Right now, sitting to my left is a prototype of Jim’s latest game, Cosmic Frog. He’s sent me prototypes to look at and critique before and he is always respectful and appreciative of my input. I’m always a little blown away by what he sends me, and this time it’s no different. I played this game with some friends a few nights ago and there was a moment when somebody’s two mile tall, world-eating frog punched another across five dimensions and everybody’s eyes just lit up. Those dimensions were just numbered circles, but the fire of awe-struck wonder was lit. And it was a unique moment that no other game can offer in this era when mimicry, duplication, and redundancy forward the illusion that game design is thriving- a moment like I experienced with Shadows of Malice years ago when I rolled up a completely bespoke monster to fight rather than roll dice at a picture on a card.

December 05, 2019
Rating
5.0
Shadows of Malice
One of the best games of the decade, an imaginative OSR-like design full of idiosyncrasy and imagination.
MB
Michael Barnes Top 10 Reviewer 137 reviews

Do I need any new components for the new edition, or can I just get the updated rules?

Space Ghost wrote: Definitely one of my favorite modern (which I define as post 2010, as of now) games. I agree with the Magic Realm mirror universe.

Do I need any new components for the new edition, or can I just get the updated rules?

Just the new rules. I think there are some very minor changes to the components (I believe he removed the symbols on the sides of map boards), but nothing that changes the game. I still need to print them out and try it.

Also, that's me with your copy of Shadows and expansion on my shelf.

Matt Thrower replied the topic: #304812 06 Dec 2019 04:20
Cosmic Frog looks like the absolute biz. I've not played a prototype but I've read the rules and I'm more stoked for it than I have been for an upcoming game in a long time.
Read More...