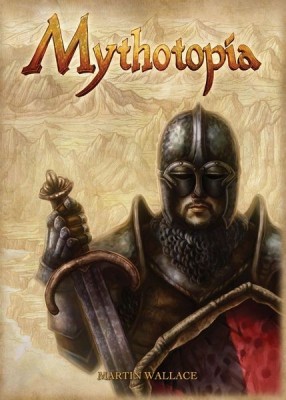 I thought A Few Acres of Snow was decent, but it felt like yet another Martin Wallace game in that it had some really solid core mechanics, a good sense of setting and a “medium rare” degree of doneness. Wallace’s games often also have some incongruously clumsy elements- like putting 16 cards on the table laden with text that players just kind of need to know in order to choose one effectively. It was my hope that Mythotopia would smooth over some of the more flakey elements (including that notorious “Halifax Hammer”) while also expanding the player count to include three and four player count options.

Mythotopia is almost hilariously underdressed in terms of setting. There’s a bit of fluff text that means nothing and a landmass with a couple of islands, lakes and mountain ranges representing some kind of fantasy empire. I almost think that Wallace is playing some kind of actually pretty funny joke here- the territory names are hysterical, the kinds of nonsense words you might have given to a country in a D&D campaign you ran in fifth grade. There is Fadge, which in our games has officially been dubbed the Duchy of Fadge. I imagine the lands of Remise to be pretty depressing. Maybe there is some kind of rivalry between Grimp and Darb?

Each of these territories with goofy fantasy names has a couple of values. There is a number, representing neutral Jeopigians or Queanish folk. There might be a shield there, representing difficult (but defensible) terrain. There is also either a coin, a pile of bricks or a wheat symbol in each. You see, for all of the Dominion that is Mythotopia’s design, there is also more than a little Risk in it. In Risk, you took over countries to get their cards to make sets to exchange for armies. In Mythotopia, you take over countries to add those cards- and the resource they produce- to your deck. These cards also determine where you can build and where you can attack from- a cool touch that reinforces the on-board geography.

Starting with a seed deck of a couple of basic action cards and a number of randomly divvied-up territory cards- maybe you’ll be lucky and get Shog- , the process is that you take two actions each turn using the cards you’ve drawn, eventually attempting to build improvements or accomplish goals on victory point cards. There are a lot of actions available, so expect the first game to be rough going as everyone tries to sort out how to actually attack someone else (play the card of the territory you are attacking from, one card with food on it, and as many army symbol-bearing cards as you want) or how to effectively manage available versus out-of-game stock armies and ships. Then there are those 16 face-up market cards that anyone can buy with a dollar- read ‘em all, or you’ll miss the best ones.

Aside from that, there are lots of finer points to digest, like thinning your deck. It’s one of the basic actions you can take unlike other games that require a card effect, but getting the hang of when to let territory cards go can be a painful decision since that also means that you won’t be building or attacking from those areas. Unless you’ve built roads linking your territories, effectively reducing the need for that card in your deck provided that you have enough of its resource to cover any needs. Then there is a Reserve mechanic, which is tied to how many Cities you’ve built. You can tuck cards away in reserve as an action, saving resources, armies or actions for a later turn. This is a cool strategic element of the game, made even neater by cards that have benefits only when they are taking up one of your reserve slots. Later in the game, the reserve becomes crucial to setting up to win the game.

The whole issue of warfare is another major point of interest, and it’s one of the better pieces of design in the game. You can pile armies into Nusus or Oxter all day long, but nothing is actually going to happen there until you choose an End War action, which you’ve got to do as the first of your two on a turn. So that means that the guy that has a town marker- and thus ownership- there has some time to mount a defense, maybe even build a castle. And you can’t end that war unless you have the majority. No ties unless you’ve bought the Hero card that breaks the tie in your favor. I really like this concept because it efficiently models the notion of sending troops to fight in a war and committing them for a period of time. Hope you saved some troops to defend Camarine, because you’re going to have one to three other players ready to jump in and exploit your over-commitment to a distant battle.

If it’s not already apparent from the above, there’s a lot of game here. This is a deep, compelling design that absolutely rewards repeat play and familiarity. If you can get around the perfunctory storyline and context, there is a reasonable sense of conquest, exploitation and improvement. I am especially impressed at how well Wallace uses the deckbuilding chassis to generate a very effective, dimensional light wargame with a solid sense of economics, limitations and advantages. It plays great with two or four players, I like it a little less with three since it has that third player spoiler/kingmaker feeling about it.

But there is a definite issue with the game involving how it develops and especially how it ends. The early part of the game seems to devolve quickly into points-swapping as territories change hands. The loser gets docked three, the winner gains three. Then that loser hits that winner, resulting in a zero sum exchange over the course of a couple of turns. This tit-for-tat gameplay goes on for a while, with a couple of folks maybe building up some defense or buying some cards to tip the advantage. Once that happens, there is what feels like a too-brief midgame segment where folks are snatching up VP counters from the fixed VP cards which reward construction of roads, castles and cities and the four random ones set out at the beginning of the game. These give points for various things including defeating dragons (well, just tokens) and taking over lands with Runestones in them (again, just tokens).

Once four of the seven VP cards are empty of VP counters, the leading player takes an “End the Game” action. They have to be winning the game in order to take the action. This sounds good in theory- “I’ve got the lead, I win”. And I like the concept that the winning player needs to be in a position of surety to thwart all usurpers at the end of the game. But it doesn’t work like that. What tends to happen is that when those VP cards start to empty, the other players start to just hammer on the leader. Leader-bashing is fine, but in this game the slog to the end feels labored and clinical. Everybody analyzes their board situation, cards in hand and so forth not to win the game, but to keep someone else from winning. This endgame seems to take up far more time than it should, and it completely saps the game of its otherwise crisp momentum. I hesitate to use this comparison because it is a little extreme, but it kind of reminded me of the endgame of Munchkin.

Sure, there are already variants and alternate ending conditions out there. But I shouldn’t have to doctor up the work of a designer widely regarded as one of the top names in the business.  As written I think the endgame of Mythotopia is almost a terminal mistake on Mr. Wallace’s part. I like the rest of the design, I think there is a very good game overall here but in two of the games I’ve played, the protracted struggle to be able to say “I win” turned off virtually everyone at the table from wanting to play it again without revision. Maybe the third time’s a charm?