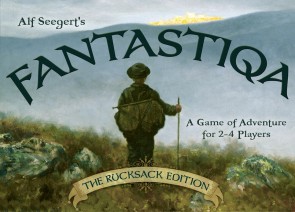 Alf Seegert’s Fantastiqa wasn’t a game that I had much interest in, and I actually didn’t even really know that much about it other than it was yet another Kickstarter title with a ton of irritating micro-expansions and it was pulling in twice its retail value in the aftermarket following its release in 2012. I knew it was a deckbuilder, but wasn’t particularly keen on bringing in a new game in that genre with Dominion suddenly getting some renewed interest with the people I play games with. Gryphon Games did a reprint late last year, but they did something unusual with it. They took out a couple of extravagances like the board and pared down the number of cards to create a “Rucksack” edition for general release. It turned up at one of the retailers I frequent and looking it over, two things struck me. One was that it used actual artwork- not unlike last year’s Battle for Souls- and it was fantasy alright but more along the lines of Lewis and Carroll than Tolkien and Howard. It was fairly inexpensive and it was the holidays, so I took a chance.

And that chance paid off, because Fantastiqa is a very unique deckbuilder that offers a couple of new dimensions to the genre beyond its more whimsical, fairy tale setting. It’s quite a bit more thematic than most dekcbuilders can muster thanks to the game’s ability to generate a sense of travel, exploration, geography and development. It’s the first deckbuilder- barring Mage Knight, if we regard that as resting within that genre- that effectively generates an adventure narrative.

Some conventions remain. As usual, you start out with a set of seed cards and you use these to buy other cards, eventually increasing your deck’s ability to generate resources or perform special functions. But the story starts there as well, because the cards you start with are common objects that are transformed in the land of Fantastiqa to adventuring gear. Your spatula card is a sword, your toothbrush a magic wand. You also get to bring your dog, who can dig up gems for you as you journey between the six different landscape types.

Fantastiqa no longer has a board, but there is still a sense of geography, distance and spatial relationships. You have a pawn that goes on the six landscape discs, and each turn you spend cards to move between the areas. Between each area is a creature card, and you use the resources generated by the cards you play to subdue them, this adding them to your deck. Some creatures may also have a gemstone on them, which you can use to buy cards at three different kinds of statues placed on the area discs. Once in your deck- either befriended or tamed, I suppose- those creature cards in turn produce a different resource to subdue a creature card when you play them at a later time. You need a net produced by Spiders to catch a Billy Goat, who in turn produces the helmet (or hard head) you need to thwart the Troll’s mighty club-swing. I really like how movement is technically a function of conflict, I think that’s an interesting way to compact two typically separate actions.

But it’s not just about building an engine to generate some kind of value or to improve outputs of resources. The whole point of all of this light-hearted, mostly non-violent questing is that you are trying to complete Quest cards. There are personal quests, which can be obtained at the Grail-shaped “Quest Chest” (no idea why there’s some dissonance there) and commonly available Quests on the table. To complete one, you have to be able to generate the pictured resources and be at the specified location. You’ll need two Club icons to play croquet with the Evil-Tempered Walruses of Wygar in the Frozen Wastelands. Take two Wands to the field to make some scarecrows dance to the delight of the farm animals. Quests give points, which is how you win the game, and typically a couple of gems as well to spend at the Artifact Tower or Beast Bazaar.

These two statues allow the player to draw three and buy as many as they can from a deck of helpful artifacts or creatures that are not in the standard mix of those available through normal traveling and questing. Some of these enhance existing actions. Some creatures may produce more than one of a resource. As if these towers weren’t helpful enough, they are also where you go to trash cards. You pay one gem per card you want to be quit of. I like that this action isn’t tied to a card but rather on-board locations because you can always thin when necessary. I find that decks in Fantastiqa get big quick, so it’s important to have this sort of release valve.

There are a couple of other elements. There are flying carpet tiles that let you travel anywhere you want, which can be very significant when you are trying to beat someone to fulfill a quest. You can bank cards to avoid the end-of-turn flush, saving them to see if you get what you need next turn. There are reshuffle tokens that can be spent to cycle your deck early if need be. And some cards have additional, optional effects. Of course, there is a totally useless card. The Peaceful Dragon can’t be bothered to do anything but take up space in your hand. Several interaction cards let you put these shiftless ne’er-do-wells into other people’s decks. I like to imagine that at each of the statues there are Peaceful Dragons milling about with nothing to do.

Despite the whimsy and light tone, it comes across as feeling bigger and heavier than it actually is. It’s a lighter game overall despite a lot of elements beyond the usual deckbuilding fare. It feels more competitive because of the open quest goals, but it still feels like it could use more friction. And like all of these kinds of games, by game three you’re itching for expansions.

Which is where the otherwise charming story of Fantastiqa suddenly gets ugly. There’s a bunch of expansions for this game- I think like nine at last count with one or two others being actually out of print. All are small a la carte add-ons that online retailers will still charge you $10 to ship. It’s really unfortunate that the expansion content has been parceled out in such a way that makes it difficult to buy just one or two at a time, which is what I would like to do and I think most other players would as well. The problem is that low-cost expansions are one thing, but when there are so many and shipping is so much these days even for one little pack of cards or a handful of counters, the value proposition suddenly vanishes. Gryphon Games really needs to bundle these up into one or two packages.

With that said, I think Fantastiqa is reasonably complete out of the box and there’s a good value here, with the game streeting around $25. The classic artwork is a refreshing change of pace from the usual kitschy nerd-art that festoons most games. There’s a lovely, timeless feel about it and it’s nice to see a game that does the heroic quest story from a totally different literary well of inspiration.