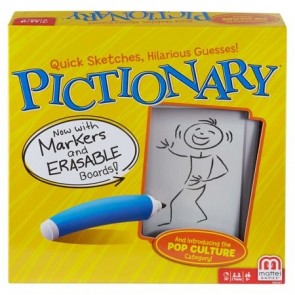 Game Name
Pictionary
Publisher
Mattel Inc
There Will Be Games

I love Pictionary for what it is: A game that 9 times out of 10 is going to include raucous laughter, good-hearted needling of my less-than-artistic talents and comments by my daughter like "That's Tinkerbell? Done by who? Tim Burton?"

After a few random conversations about how our version of Pictionary was old and out-dated, I picked up a new version on a whim to comfort myself on a long trip to “The Wal Marts.” You see, the version of Pictionary I originally owned was handed down to me by my parents and, from what I can tell, is the original first edition from 1985. I could have sworn it was older, simply because the rule sheet references “President Carter” at one point. What I hoped for was something that didn't have some of the “dated” clue cards, like referencing “Cordless Phones” or Television shows that have long been forgotten (or never known) by my kids or other players who weren't raised in the age of black and white/3 total stations of television. 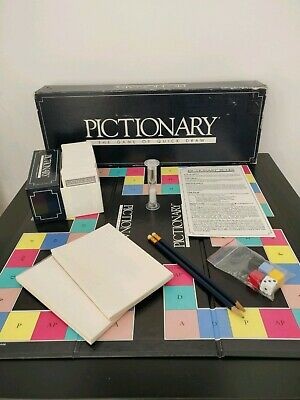 One of the other reasons I wanted a replacement is the original box is rather large and oddly shaped and never quite wants to fit into any place I can find to store it. What I ended up with was...Well, this IS a review of Pictionary: let's see if you can guess what we ended up with... 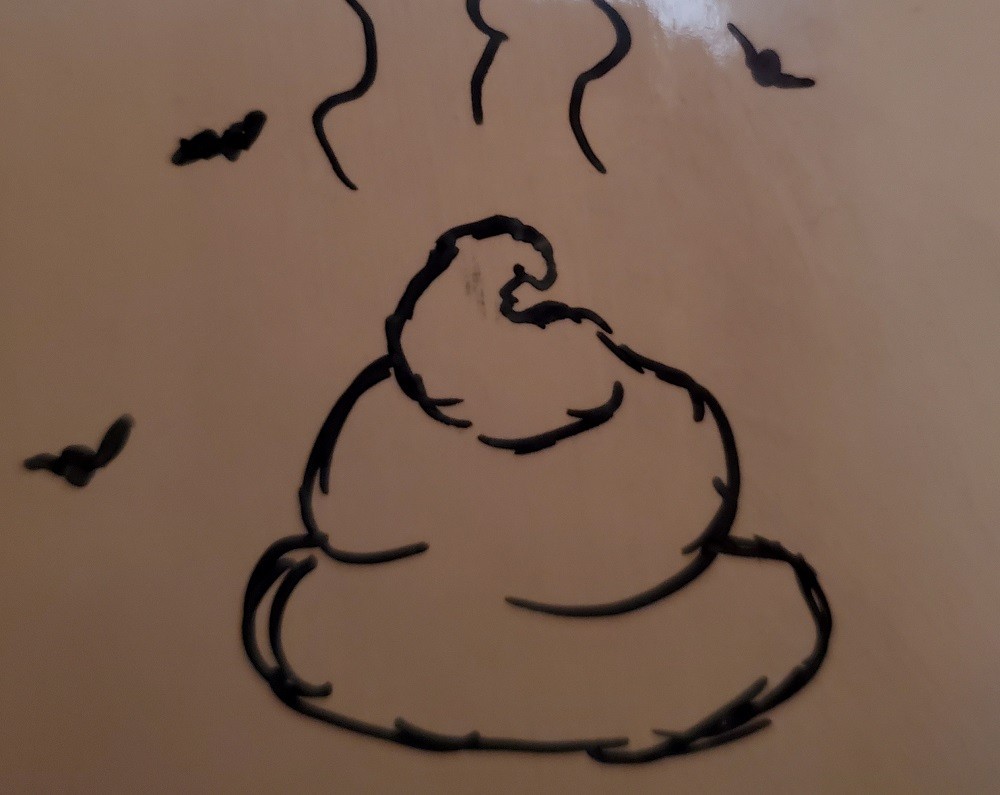 Some of the things in Pictionary haven't changed: Yellow is Objects, Blue is Person/Place/Animal, Orange is Action, Green is Difficult. But now Red is Pop Culture. Red USED to be All-Play. The new “Pop Culture” category is a tragedy. How hard would it be to make a freaking region specific version of the best-selling game? But, no, you have this insane mixture of “Pop Culture” that ranges from Beat Bugs (that “well known” Australian-Canadian animated children's television series based on the music of the Beatles) to “Whale Rider” the 2002 New Zealand/German family drama, and “Stagecoach Festival” which is apparently the country music version of the Coachella festival (Thank you Google, for the above explanations). Don't worry! Pop Culture manages to include those dated clues I was hoping to replace by including things like Fiddler on the Roof (that cutting edge musical from 1964..or maybe they are referencing the film from 1971?) and Television shows like My Three Sons (that ran from 1960 to 1972). Here is a tip: Never take the weakest category from trivia games and add it to your game.

If anything, it has actually replaced the Outdated cards with an increased number of “I have no idea what that is, I'll take another card” moments. Thank goodness that plenty of high-quality cards are included! The most recent version includes roughly 1/3 the number of cards found in the original game. And the “High Quality” boxes they fit into are of two different sizes because ??? I guess it was just easier than printing a few more warped cards and search-engine random words to fill up two of the “larger” boxes. 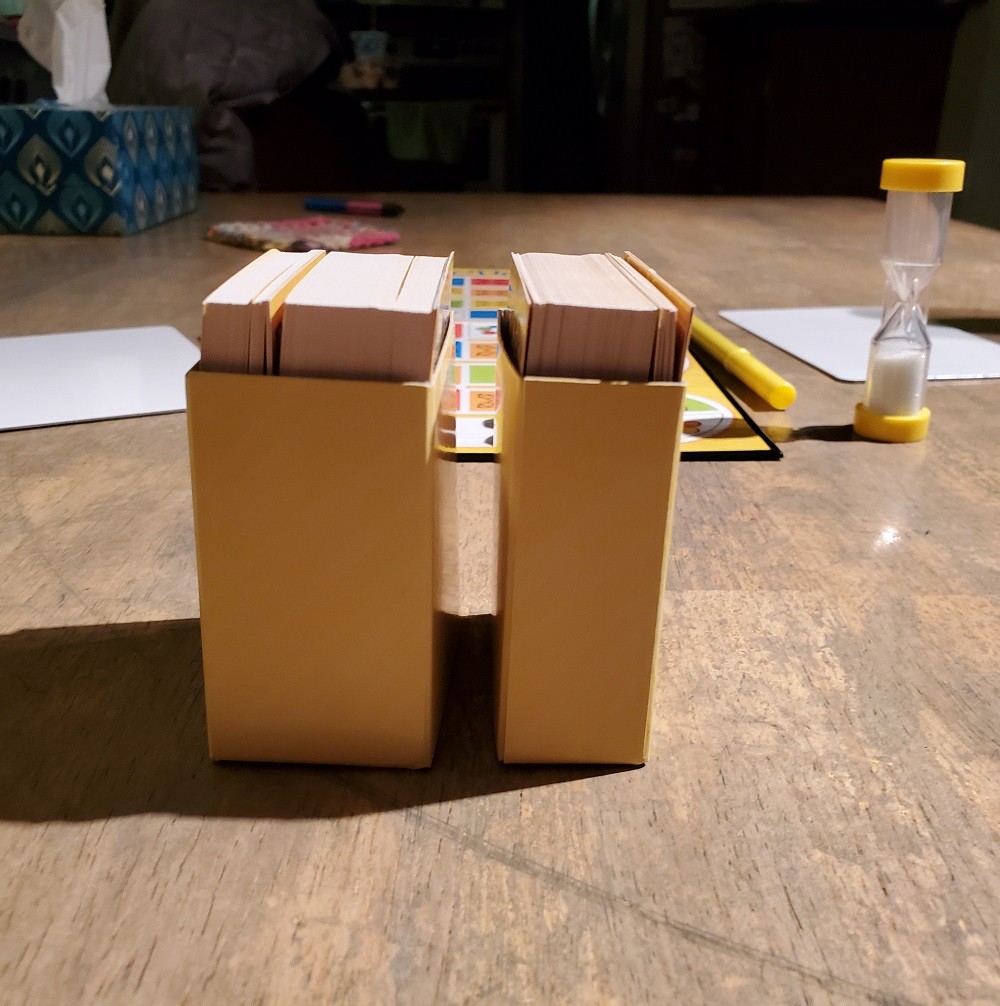 The original game included two pads of paper and some pencils to do your drawing. We had home-brewed our own solution by putting an 8x10 piece of paper into the box covered in a plastic sleeve so we could use dry erase markers. Total cost? About 20 cents. I would have simply laminated some thick stock paper and put them into the box but, as I stated earlier, it is a weird sized box and it wouldn't quite fit. This version includes two way-too-small whiteboards and two janky pens. These boards are NOT dry erase, you need something damp to erase them...and we all know you never, ever have to erase mid-clue. Nothing says game night like needing a damp washcloth at the table to erase the board. Oh, and it comes with this lovely warning about using the included boards. 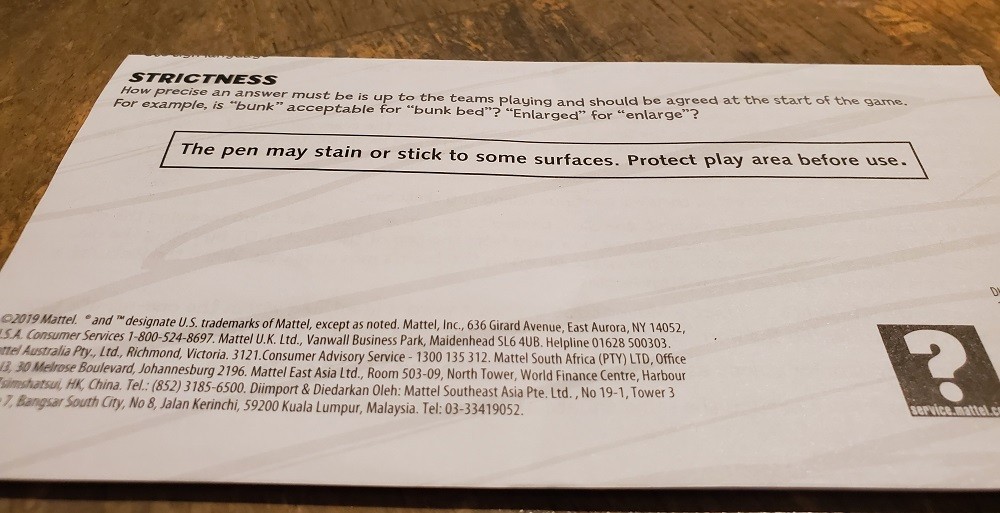 And they aren't kidding, every game we played ended up with us looking like this: 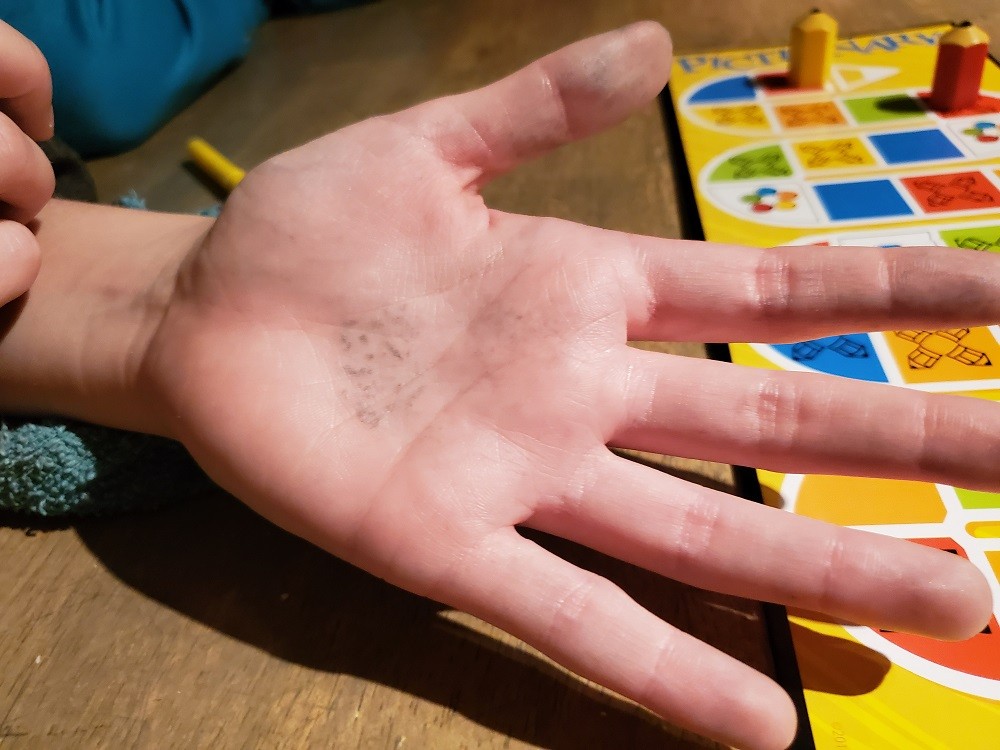 I also found that they shortened the board to 30 spaces (from the original 55 space board). Sure, now it doesn't have an over-sized board but we literally had one team reach the last 3 spaces of the board in a single turn. They also removed the “All Play” off the cards and put them onto the board. They also added the all-color space which lets you pick any of the clues you want from the card you draw. You know, so you can feel like you've played that card before when you draw it again because you have read every single clue on it. 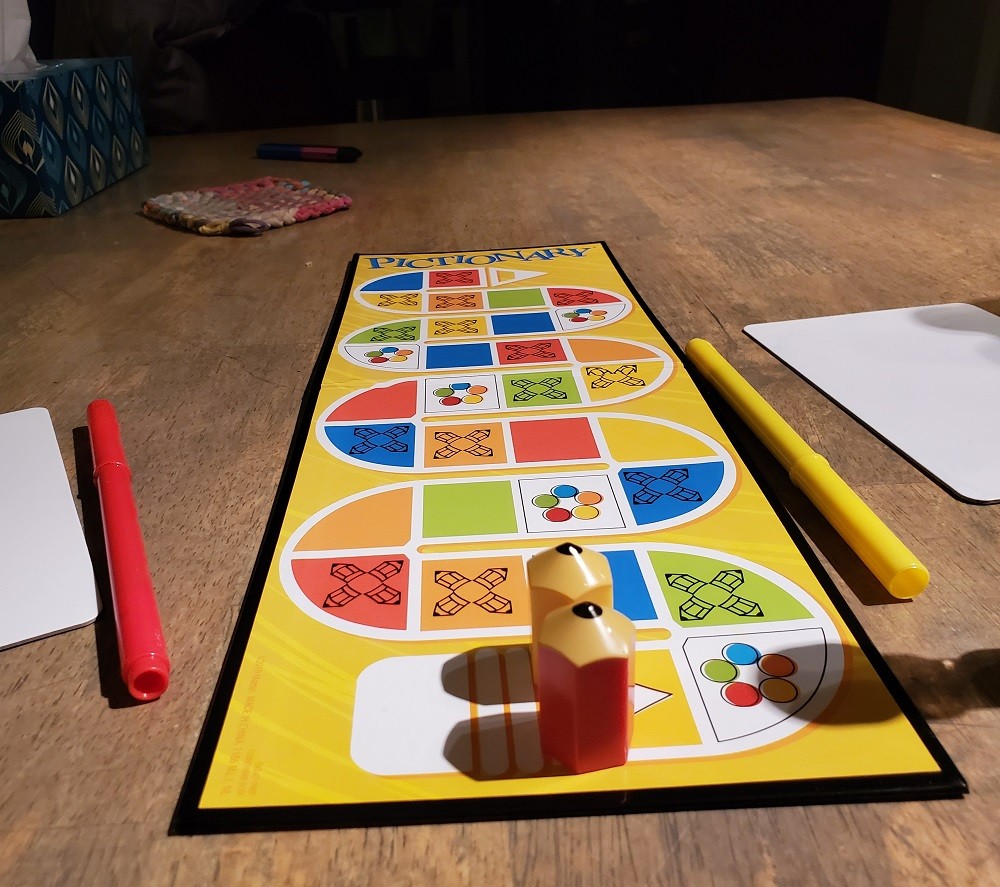 The game has also been reduced to two teams instead of multiple teams (Because then they only have to include two player markers instead of five). You will find the traditional sand timer included. Of course, anyone who plays this game knows that the lack of a sound when time runs out from, say, an egg timer or setting your cellphone to count down from 1 minute is one of it's biggest shortcomings, so they brought that over untouched.

Never have I ever experienced a game/company trading so heavily on nostalgia to deliver such a sub-par product. Mr. Pictionary guy is not laughing with you, he's laughing AT you. And, just for the record, I kept my old version. Even if it is dated: it's not the low-quality, completely lacking bastardized version that is currently on the shelves. Do yourself, and your family, a favor, don't buy this crap. But don't take my word for it, my Daughter Tegan would like me to include her one drawing review of this version of Pictionary: 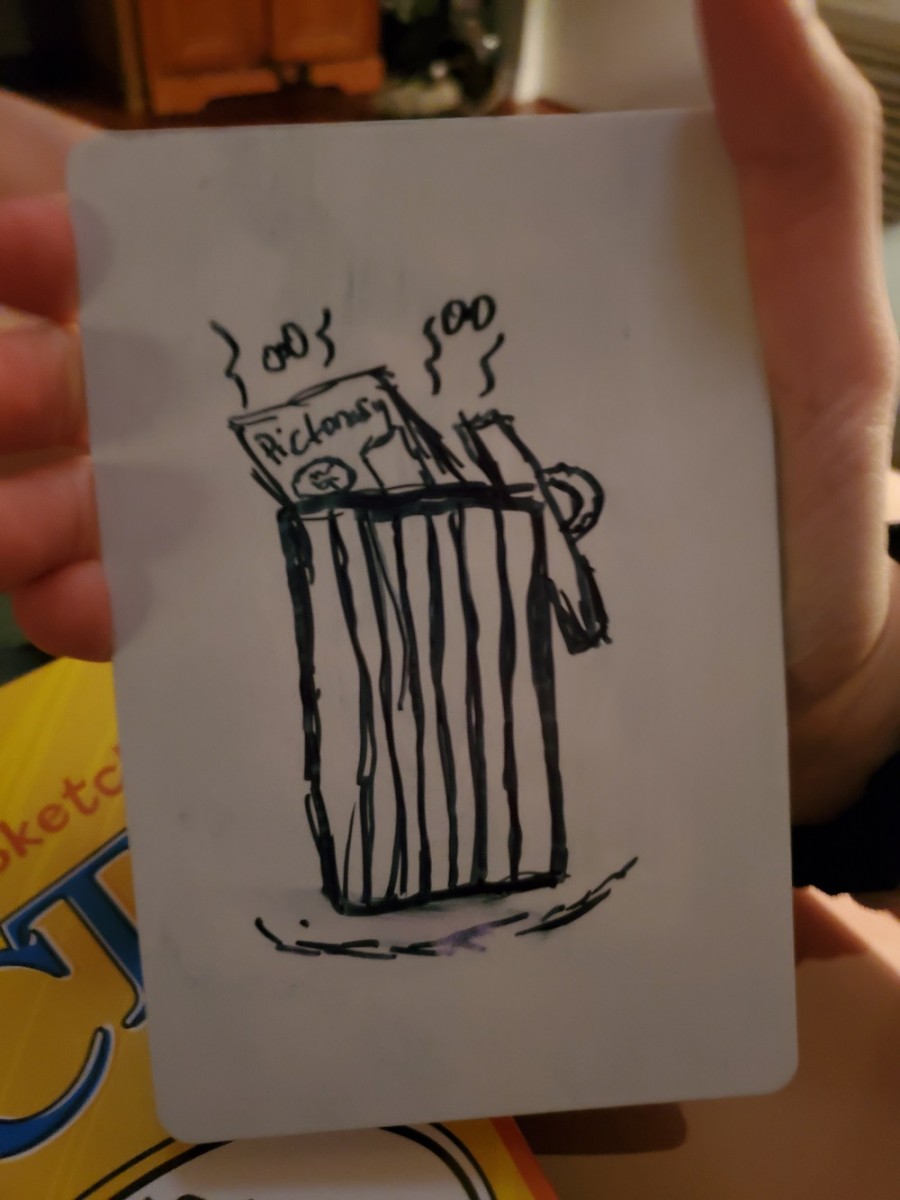 December 15, 2019
Rating
0.5
Pictionary
Never have I ever experienced a game/company trading so heavily on nostalgia to deliver such a sub-par product. Mr. Pictionary guy is not laughing with you, he's laughing AT you. And, just for the record, I kept my old version. Even if it is dated: it's not the low-quality, completely lacking bastardized version that is currently on the shelves. Do yourself, and your family, a favor, don't buy this crap.
W
WadeMonnig Top 10 Reviewer 195 reviews

mc replied the topic: #305497 25 Dec 2019 19:05
For what it's worth though Wade is spot on with everything about both versions (including what is good about pictionary - I can remember my parents coming home from dinner parties in the 80s talking about how so and so had almost divorced on the spot because of incomprehensible drawings a la millhouse's parents in the Simpsons. Any game that can do that has got to have something going for it).

Shellhead replied the topic: #305519 26 Dec 2019 11:16
I played Pictionary once at a family reunion. It was good for laughs for a while, but we didn't take it seriously enough to even finish the game. A year later, I nearly played it again, at an office holiday party. But it was a law firm, and the lawyers found it more enjoyable to argue about the rules and the teams, so we never actually got to play that time. Though not Pictionary, I have also played Eat Poop, You Cat, and that was more of a party activity than a game, but still more fun than Pictionary.
Read More...