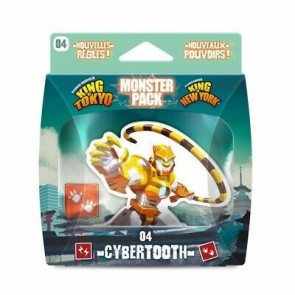 Reporter: General, General! The Satellite imaginary shows that Tokyo may be reaching Critical Mass with the latest influx of Kaiju....

General: Let me see that! (Mumbles) Good lord, does this man not own a custom insert! 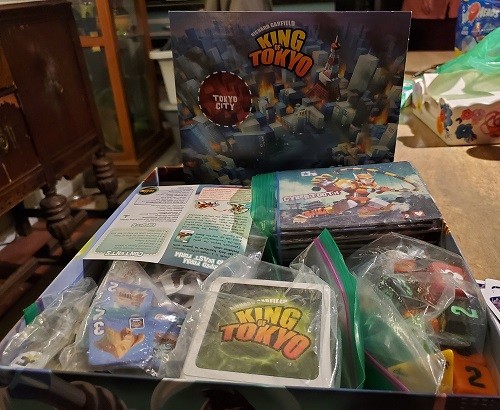 Reporter: The recent arrival of Cybertooth has really accented this issue. It can transform between Beast and Biped form. That requires an entirely separate standee!

General: (snaps) You just thank your lucky stars we didn't opt for miniatures! I don't have time for this...

Reporter: Sir! One final question! It is of the upmost importance...how would you spell the sound Cybertooth makes when it transforms?

General: That would be “Tsche-chu-chu-chu-Tsche.”

That's right, in the latest monster pack from Iello, Two Standees come with Cybertooth: His Biped form and his Beast Form. And both have distinct advantages that are accented by the Power-up cards. And, as a balance, both have limitations. While in Beast Form, you may re-roll one of your dice an extra time but that is balanced by the fact that while in Beast Form, you can't purchase any power cards. While in Bi-ped form (which is basically standard monster form) you can buy cards but can switch to Beast Mode (and visa-versa) by spending a single energy. If this sounds interesting to you, it doesn't have to be limited to just Cybertooth, you can download and print Biped/Beast cards to use with other characters via an included link within the expansion. (But, sadly, they are not character specific, they all feature Cybertooth) 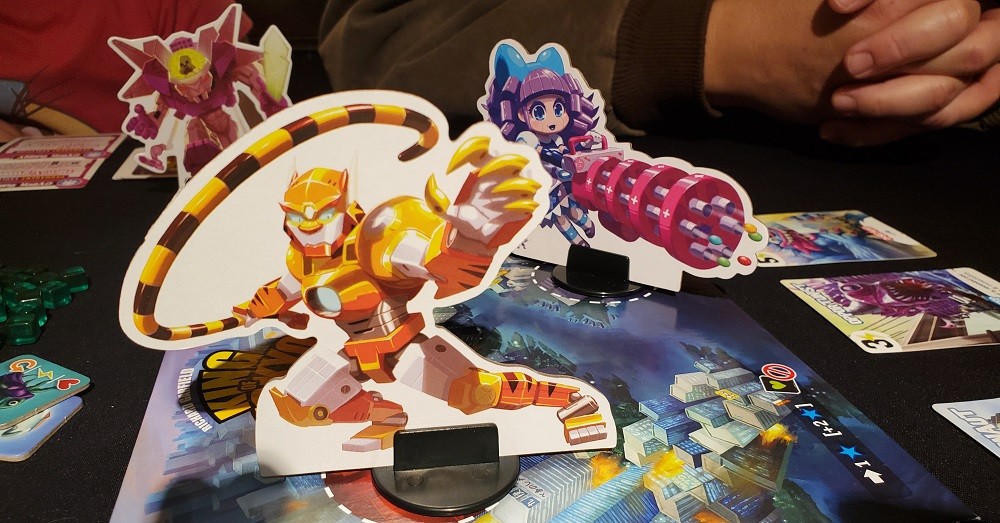 The biggest addition that stands out when you first see this expansion is the Berserk Die: It's tempting in all sorts of ways- Double Energy, Double Paws. And, like most KOT/KONY expansions you don't need to use the Power-up Evolutions or even play with Cybertooth in order to add it to your game. You enter Berserk Mode by rolling Four Paws. Oddly, it is like the hearts you roll to secure new power cards when using the power-up expansion are “easier” to get...which, of course, makes no sense since you are rolling dice with six distinct faces and both Paws and Hearts are just one of those. It just “feels” like it because it is a more situational power. Am I going to attempt to go into Rage mode the first turn of the game? Probably not, it seems like something I should be waiting to pouch with at the right opportunity. It is very similar to deciding when to go into Tokyo. As in there is no real “right” answer and it all depends on what play style you are adopting. 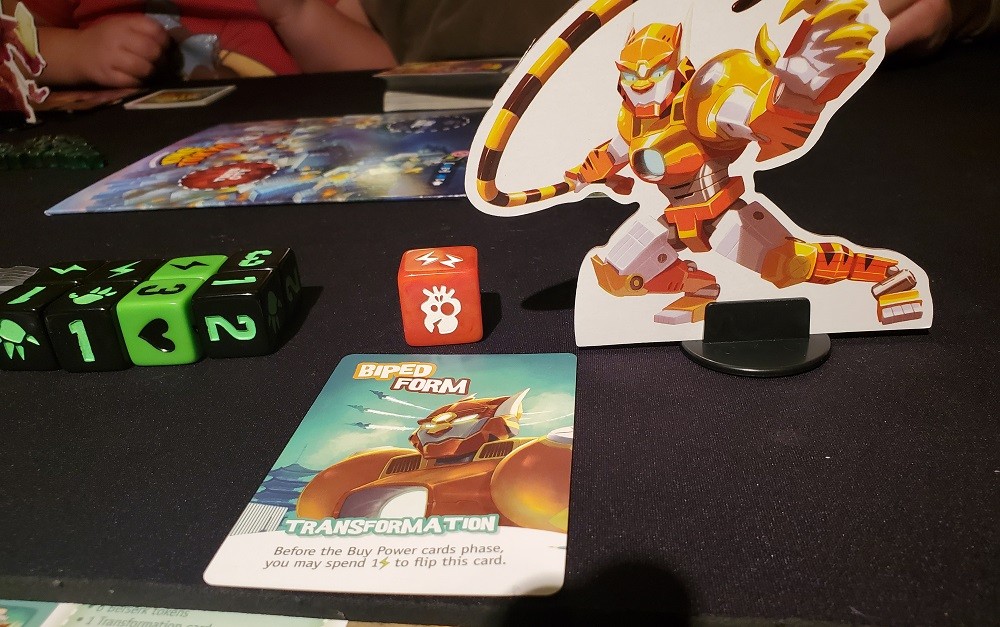 Berserk Mode is signaled by physically putting one of the included Berserk Tokens onto your Monster Avatar. You stay in Berserk Mode, rolling the extra berserk dice, until you finally give in and heal. So, just another Jenga piece added onto the push-your-luck Tokyo Tower of the King of... games.(Aside: While I don't want to go off on a tangent, by “Heal” the game means “Gain Health” It doesn't matter if that is via Heart Dice or card powers or the Healing Ray of another player. I swear, for such a simple game, you can Rule's Lawyer the crap out of KOT.) It isn't all Sunshine and Rainbows (or Energy and Paws) with the Berserk Dice, the Ouch face will be familiar to players who have ventured into King of New York. When this face is rolled in King of Tokyo, the monster rolling the dice takes one Heart of Damage. (Visions of Cybertooth being so ticked off he kicks a building and stubs his toe come to mind). 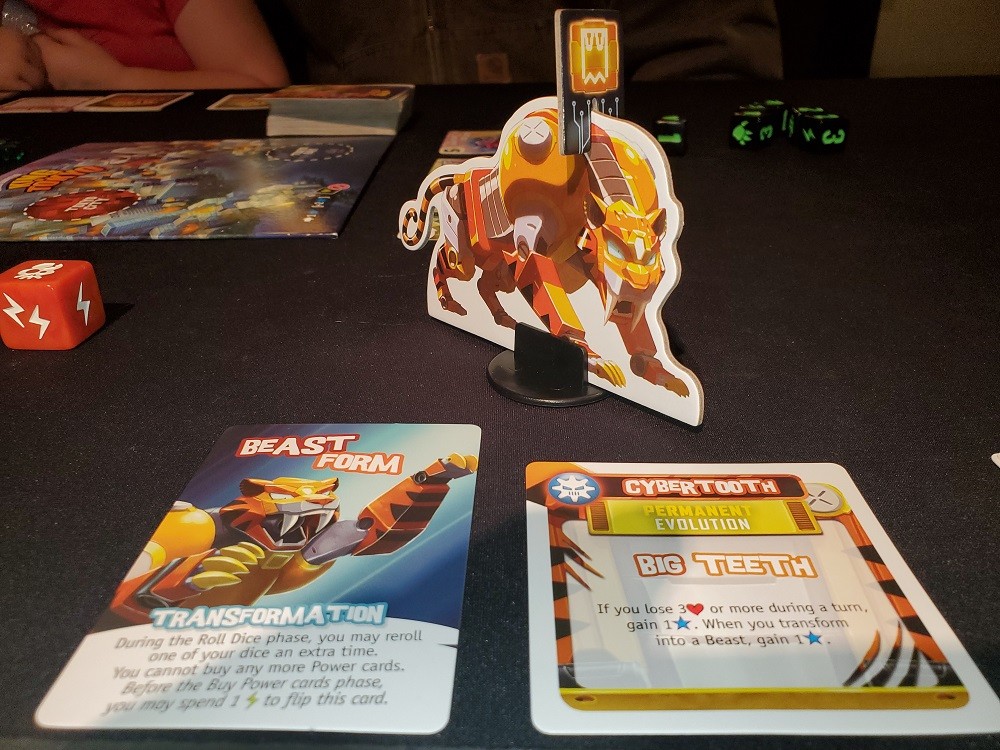 The Power-up cards for Cybertooth really lean into the addition of the Berserk Dice. One allows you to enter Berserk Mode easier than the other monsters and another lets you siphon off power from a Berserker opponent. In stark contrast, Cybertooth's Self Repair Power-up card causes you to gain one heart at the beginning of each of your turns if you are in Biped Mode. Sounds great, right? Except that little caveat about “If you Heal on your turn, you immediately exit Berserker Mode.” Oops, looks like if you go this route, Cybertooth takes a chill pill at the beginning of all of his turns. The Power-up cards are virtually identical for both KONY and KOT, so it doesn't require any mental shifting of gears when playing him in either of the two releases. 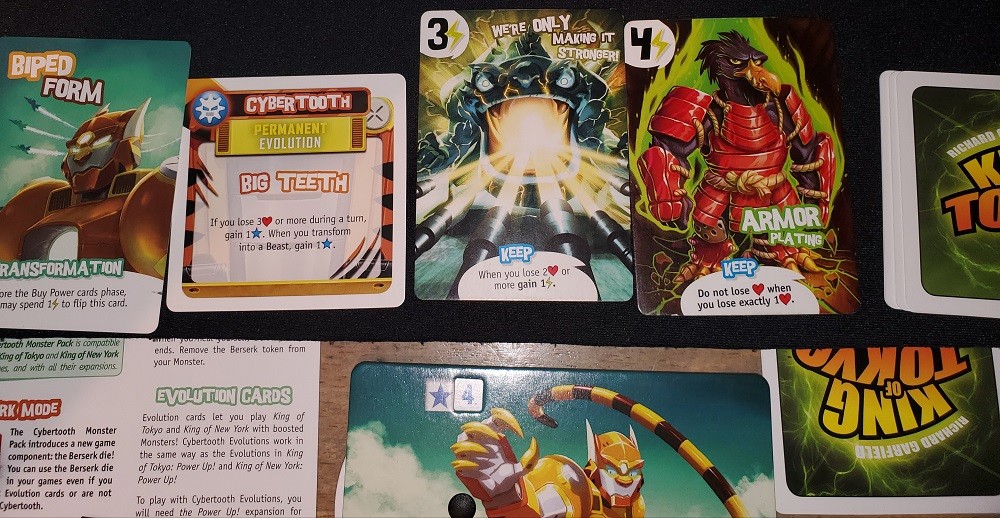 Of the Monster packs released for KOT/KONY, I rank this one right up there with Cthulhu (which added the fantastic cultists). I loved adding King Kong and Anubis as characters but for straightforward Mechanism additions (Another bad-ass die!), Cybertooth is a character pack that you want.

December 16, 2019
Rating
4.0
King of Tokyo Monster Pack: Cybertooth
Of the Monster packs released for KOT/KONY, I rank this one right up there with Cthulhu (which added the fantastic cultists). I loved adding King Kong and Anubis as characters but for straightforward Mechanism additions (Another bad-ass die!), Cybertooth is a character pack that you want.
W
WadeMonnig Top 10 Reviewer 195 reviews

There are no user reviews for this listing.
Already have an account? Log in now or Create an account
Discuss this article
Log in to comment
Posts in discussion: More Than Meets the Eye of The Tiger: King of Tokyo/King of New York Monster Pack #4 Cybertooth Character Expansion Review

rinelk wrote: What’s the girl with the bow in her hair and the jellybean minigun?

That is the Lollybot promo. She doesn't have evolution cards, so we just use other character's evolutions when playing as her.
boardgamegeek.com/boardgameaccessory/247...ybot-promo-character

Shellhead replied the topic: #306255 16 Jan 2020 09:44
If they keep doing expansions for this game, people might start to think they are Steve Jackson Games.

Gary Sax wrote: ...except this game is thought to be pretty good, unlike Munchkin?