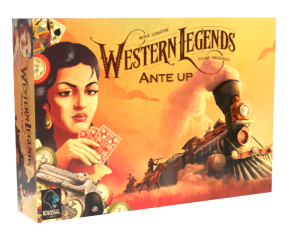 Billy stared across the smoky saloon table at “The Other Kid,” the one they called Sundance. While Billy had a fondness for Faro, he preferred to make this bets with lead instead of gold when lady luck didn't go his way. And this Sundance was making his fingers itch. The other kid spoke up “Billy, this town ain't big enough for the two of us.”
Billy dropped his hand to the derringer in his lap. “What did you say to me?”
“Billy...Wade! Pay attention! I said this table isn't big enough for these two boards. This frontier expansion board is pretty massive.”
“Sorry, Sorry, I was getting into character...Let's just try moving the player boards closer to the edge and rearrange the placement of the Trading Post.”

Ah! The Frontier, The Iron Horse, The Fiddliness! 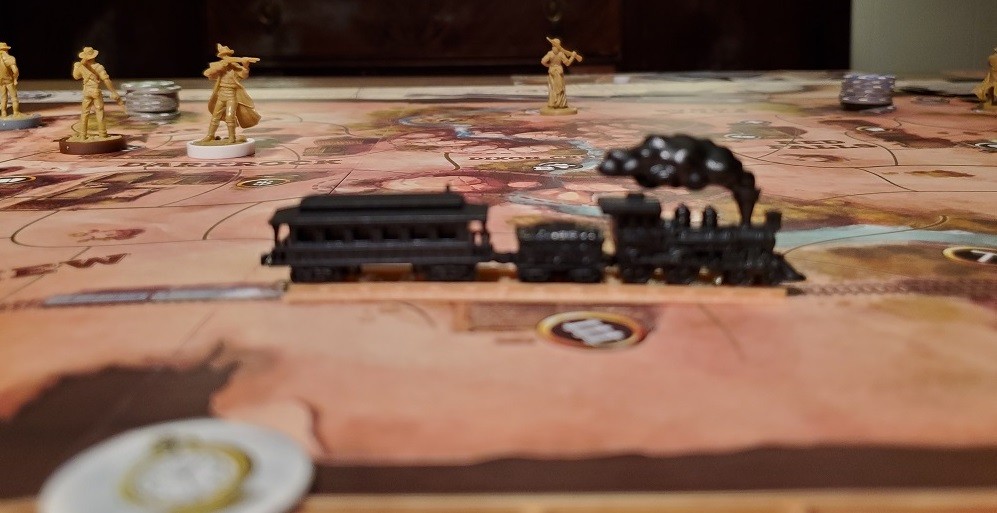 The included Player Aids are the nemesis of those found in the Base Game. This is partly due to many of the new additions in Ante Up are build upon the rules in base game. The one constant in Western Legends is “If you are defeated in an encounter, you lose one health and draw one poker card.” But, now you can also take an additional unavoidable wound or something similar. If you are using the Player Aids as “one stop shopping” for resolving actions (by simply going to the result on the player aid) and you forget that you always gain a wound and take a poker card when you are defeated, it can get confusing real quick. And just to make things worse,the Man in Black cards that are used in the two-player game are executed exactly as printed (without the Lose one health, draw one poker card rule). The new Player Aids aren't nearly as helpful or concise as the original. And when they are actually wrong, like the misprint that states when robbing the bank, the guard draws two cards (it is actually three). you end up re-reading the entire expansion rulebook to see if that specific rule has been changed or updated. Despite the extra page addendum included in the expansion, there are still some rules that are not covered in the rulebook (For instance, how the Sheriff moves between the two boards isn't mentioned.). 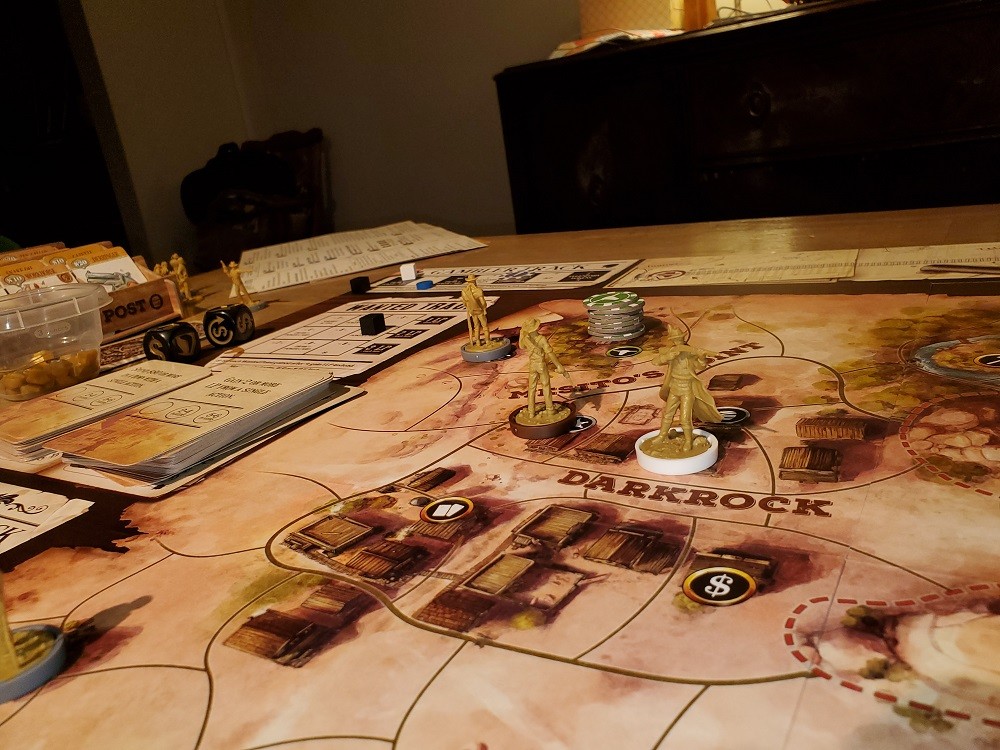 Now that I have nailed hoome some of the fiddly portions of the Ante Up expansion like John Henry driving a railroad spike, let's get to the portion that steams ahead like a locomotive with Casey Jones at the throttle (And, no, not the Grateful Dead's Casey Jones). Eight new characters, a second store in the form of the Trading Post (and new items to stock it), an additional scoring track for Gambling, alternate poker cards that give variety to the 5,7,8,9 and 10 cards, and the beloved Train. 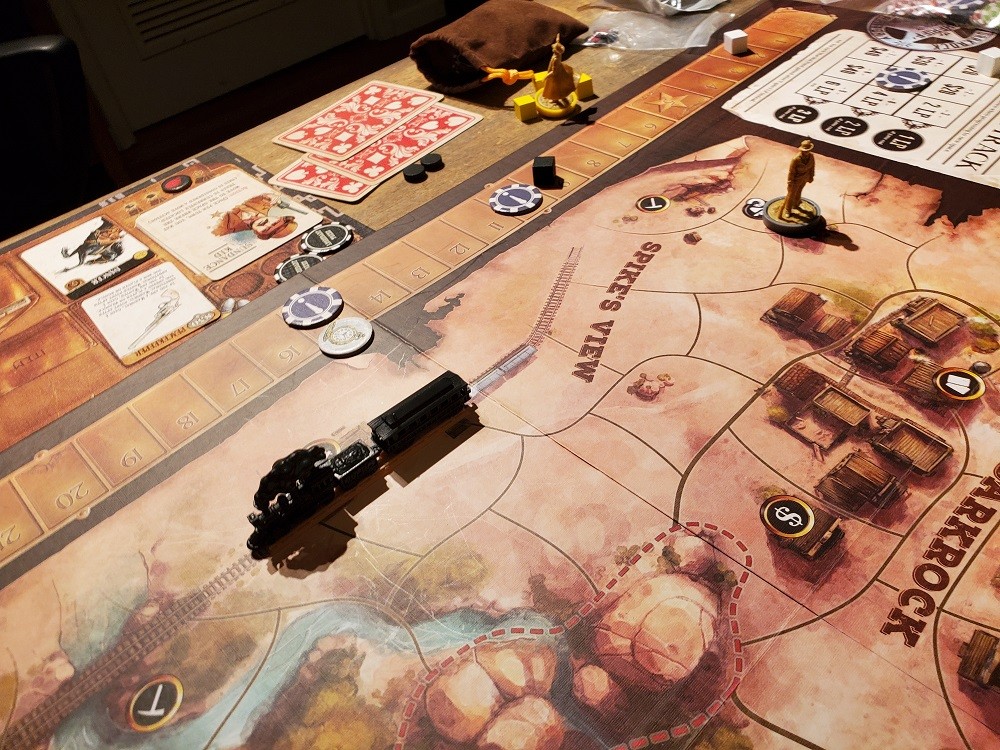 The only thing that will outnumber the Sergio Leone quotes at the Ante Up table is player's asking “Did we move the Train?” One of the joys of Western Legends is anticipating and contemplating what you are going to do on your turn. Hell, remembering to take either your poker cards or some cash at the start of your turn was something that occasionally got skipped in our plays of the base game, simply because we couldn't wait to make our moves. So, advancing a train that isn't going to necessarily impact you directly is another thing that can (and will) get skipped. And while the “taking the train” action (for $10) to move from one station to another is a great movement option, it ignores the current location of the actual train mini and can be confusing in that way. Oh, but robbing the train! Ante Up nails robbing the train. The train circles the board like a tempting pinata containing the mother lode of cash and a boost to your legendary points. It's just begging for you to take a swing at it, when you get desperate enough. Except, this pinata could be filled with bees and taking a whack at it might reveal a trap set by the Sheriff or it could be filled with a host of bored Army recruits headed to their next assignment. 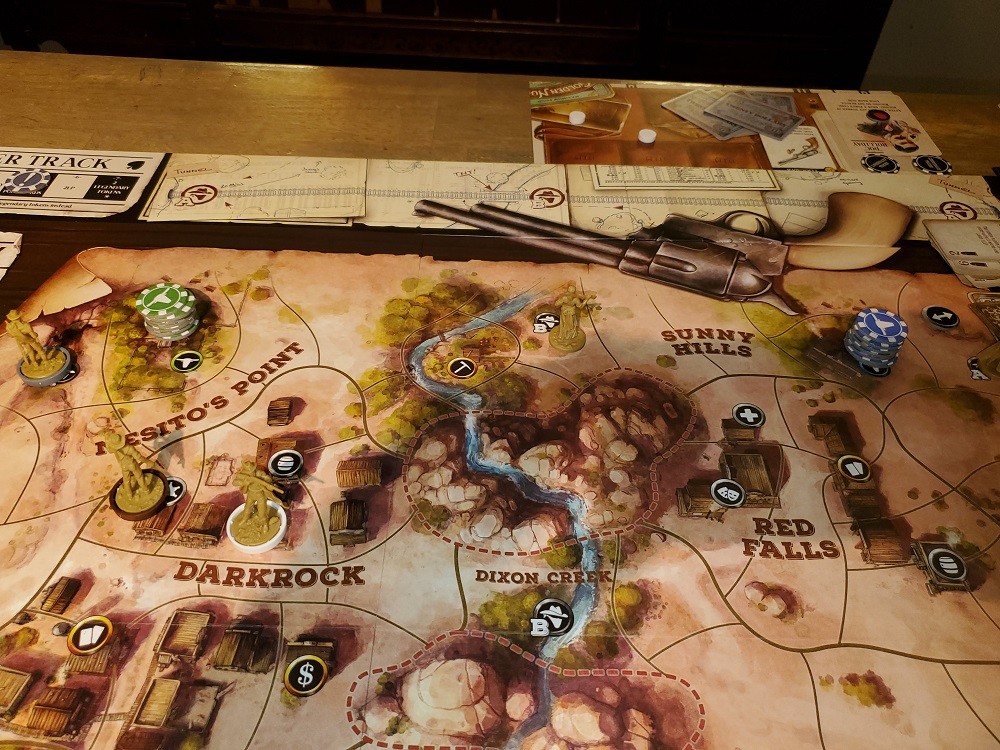 No expansion is complete without adding a host of new playable characters. The abundance of memorable characters from the old west means Ante Up didn't have to dig deep to add legends like Pat Garrett, The Sundance Kid, and “Soapy” Smith and they all come with their own character goal cards if you choose to play the “advanced” game.

The addition of the trading post put in an area to purchase cards on the new frontier board. You split the base cards and new cards between the General Store and the Trading Post. Yes, that means that some items (and their upgrades) aren't available at one place if they are located at the other. This adds additional reasons for players to transverse the board, which leads to more chances for player vs. player interaction, which is always a good thing.

The alternate poker cards accent one portion of Ante Up that some player's may have issue with, it isn't modular. You really need to add everything from the expansion in order to properly play it. I love the variety of card powers that are added without taking away all of the originals (you replace the Black 7's with the new Black 7's which means the original red 7's and their power stay in the deck). But some of these powers are only really applicable in Ante Up, so you can't just add the cards and leave out some of the other portions of the expansion.

While the Lawman and Outlaw tracks make things black and white in the old west, the new Gambler Track adds a bit of Grey. You can still be a gambler while wearing a badge and this new track adds another way to gain Legendary Points, Poker cards, and a way to trigger Events. Even if you don't care for the addition of Faro (A basic card game that is historically accurate, if not historically exciting), you can gain Gambler points playing Poker and facing off against marks..err...High Rollers. But I will say one thing about Faro, you don't have to spend any of your precious Poker Cards to play it! 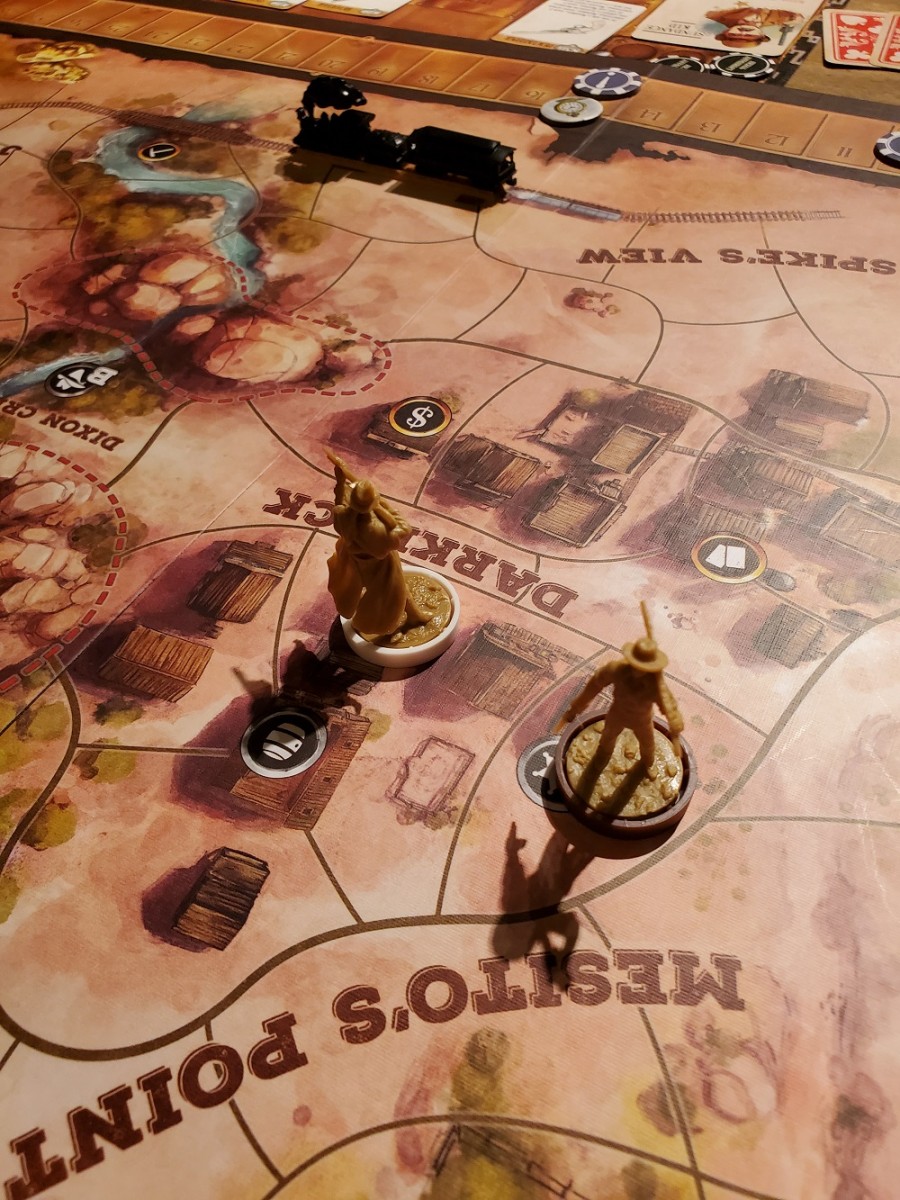 While Western Legends doesn't crumble under the weight of the Ante Up expansion, it does take a few games to get your footing. I would not suggest using it during an introductory game of Western Legends but, if you are reading this review because you want to know if you should add the first big-box expansion to Western Legends, the answer is a resounding yes. What is brings is definitely worth the fiddly (even if I do wish the execution and some of the explanations were smoother).

December 29, 2019
Rating
4.0
Western Legends: Ante Up Expansion
While Western Legends doesn't crumble under the weight of the Ante Up expansion, it does take a few games to get your footing. I would not suggest using it during an introductory game of Western Legends but, if you are reading this review because you want to know if you should add the first big-box expansion to Western Legends, the answer is a resounding yes. What is brings is definitely worth the fiddly (even if I do wish the execution and some of the explanations were smoother).
W
WadeMonnig Top 10 Reviewer 195 reviews

There are no user reviews for this listing.
Already have an account? Log in now or Create an account
Discuss this article
Log in to comment
Posts in discussion: I'll Make Ya Famous: A Western Legends Ante Up Expansion Board Game Review

The Young Guns quote is all well and good but I want props from the Homesteader Droopy shout-out....It's the Lawwwwww of the West.

Jackwraith replied the topic: #305938 08 Jan 2020 13:36
Uh yeah. Faro is not the game I would have added if you wanted players to actually be interested in trying it. But it certainly is authentic to the time. That's unfortunate that the expansion isn't modular. Some expansions, like Champions of Midgard, are so seamless that it seems obvious that the game was initially designed with them before they were stripped out for economic/ease of learning reasons. This does not seem like one of those expansions.

charlest replied the topic: #305939 08 Jan 2020 14:16
The Champions of Midgard expansions were not stripped out at all. They went through a lengthy development and were entirely new.

ubarose replied the topic: #305942 08 Jan 2020 14:34
I agree that this expansion is a bit overwhelming and fiddley. But it adds a lot of fun things, and I feel it makes winning as an outlaw or a gambler more viable.

WadeMonnig replied the topic: #305943 08 Jan 2020 14:54
The fiddly just stands out to me because of how smooth the base game was. It's definitely not a game killer, it's just something you have to work past.

WadeMonnig wrote: The fiddly just stands out to me because of how smooth the base game was. It's definitely not a game killer, it's just something you have to work past.

My own game designs have tended to be fiddly. During design, fiddly is okay because it is often a response to issues identified during playtesting. But looking back, I realize that when the finished game remains fiddly, it's a sign that the designer didn't fully resolve some playtesting issues in an effective manner. Not when you can still see the duct tape and pencil marks on the overall game.
Read More...