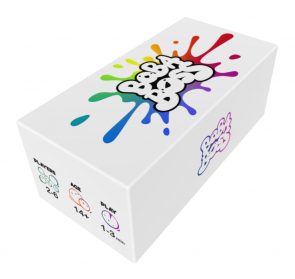 Question: Does the Dice Tower component drop make you cringe? Of course it does. Components are bouncing around and cards being dropped and bent. Now, imagine all of that wrapped up into card game form: freewheeling tossing of cards, flipping them on and around the table and, plenty of times, snatching them up off the floor.

The object of Boba Boss is simply to fill all of your teacups before your opponents fill theirs. While all the players are drawing cards simultaneously to attempt to fill their cards/cups, they also come across Spill Cards, which lets them reach across the table and, whoops, knock over the indicated players full cup of boba tea. My wife asked “Why is it called Boba Boss?” The obvious answer is that it is the preferred game of bounty hunter’s Boba Fett and Bossk...or maybe because Bubble tea is also called Boba tea (and, let's be honest, there was already a board game titled Bubble Tea.)

There is a lot flippin' going on in the game: Flip your cards, flip the other player’s cup cards from full to empty to spill them, flip players off when they flip your cards, flip “Mr. Tea” into their collection (giving them an additional cup they have to fill), flip out when you win, flip the table when you lose. It is a mixture of the classic card game Speed and, well, Bubble Tea. It has flavoring of Memory requirements along with a bit of actual Dexterity. 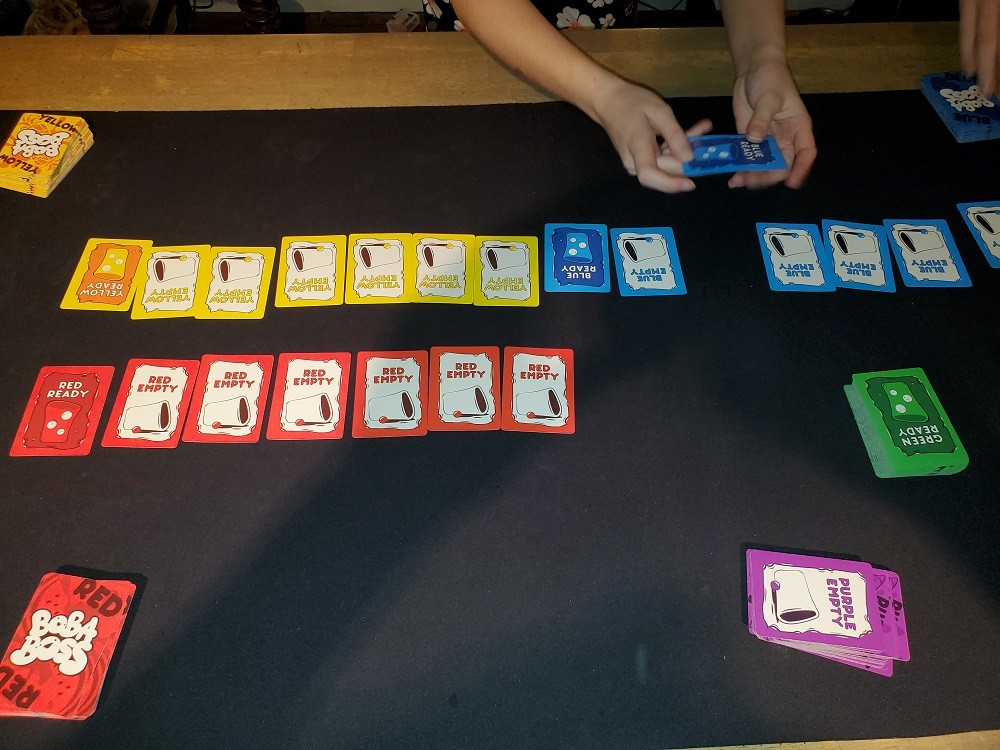 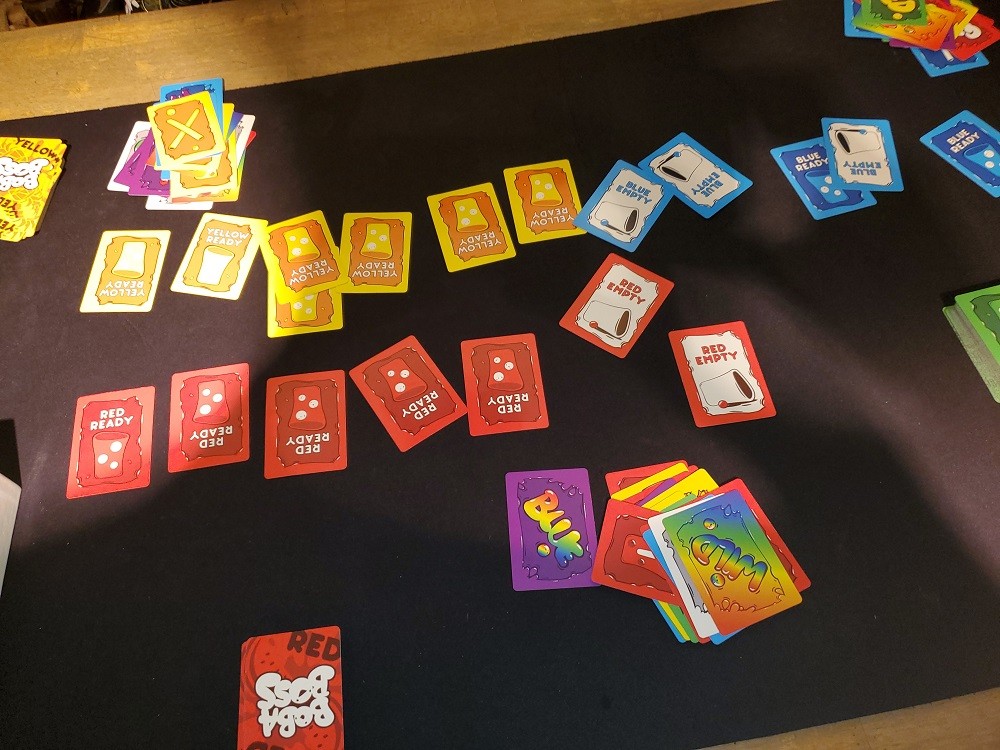 Each player's deck includes an ever changing mix of Spill Cards. The first round you might just be using the outer card color to determine which player you can spill the tea of. However, the next round it might be the actual word printed in the middle of the card, such as “Purple” or another round it could be the actual COLOR of the word printed in the middle of the card. Now keep that straight while you are playing. Have you got that down? Now add in other Boba Tea cards. Some will stress out your mental side: cards that change the spill designation mid-round. Others will test your physical side: like the Kara-tea card where you actually slip the card under another players teacup card and flick the cup over (and maybe even off the table). And some of them are just straight up silly: requiring everyone to complete a toast before they can return to flipping over more cards. There is just something stupidly fun about yelling out “Boba!” (Like yelling out Uno!) When you are close to winning (or Dos!, in this case, since you yell it out when two cups or less remain). And don’t forget to yell “Boba Boss” when you have all your cups filled to claim the win before someone knocks one of your cups silly. 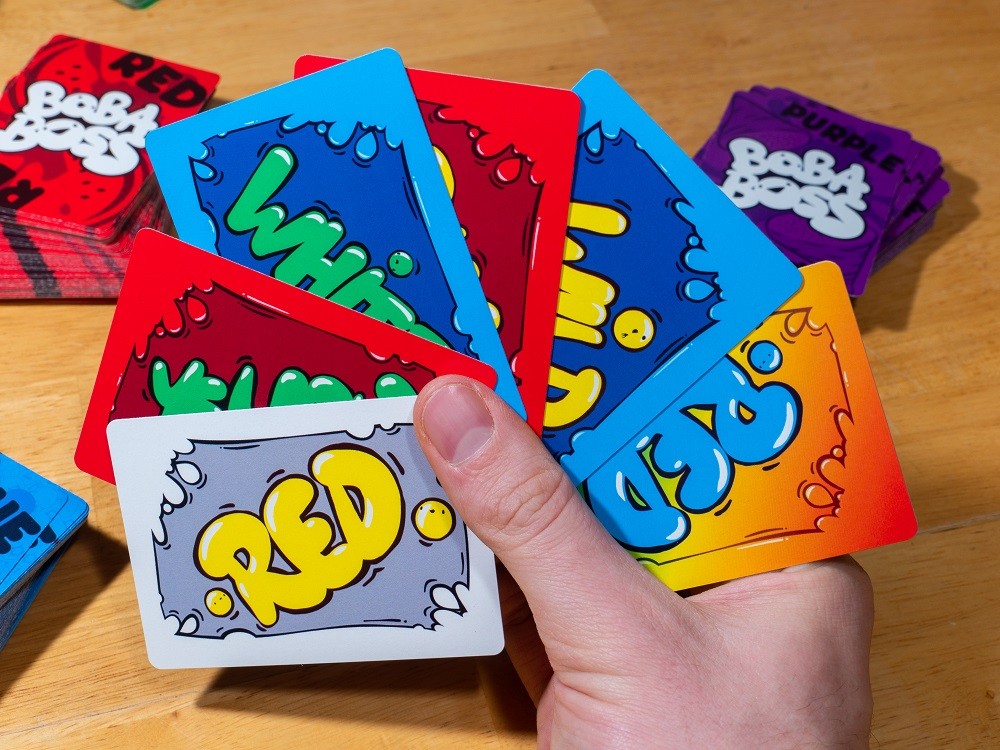 Part of the fun of the game is just introducing new cards after playing a few hands and watching everyone adapt...or attempt to adapt. “Oh, I hate that card! Take it out...no, wait, put it back in, it was pretty wild.” Even the basic fill cards (one straw, two straws, crossed straws that stops a cup from being spilled) keep you on your toes. “Should I use this crossed straws card to fill two cups or should I use it to fill and protect a single cup?” With everything playing out in real time, don’t dwell on it too long, this isn’t a game that tolerates Analysis Paralysis.

There are many factors that can (and probably will) change before you can get your hands on Boba Boss. Are the Teacups (now currently represented as traditional poker sized cards) going to be changed to cardboard thickness? Probably. This will both increase their durability and make them easier to pick up off a table. I’m entirely behind this because we had to switch to using my game mat after attempting our first game on a traditional wooden dining room table. Are the actual cards going to be diminished in size to make it easier to reach and get six players to the table? I’m really torn on this one. Most of our games were played with four players and the larger poker-sized cards “feel” good, are easy to shuffle and, at that player count, the larger size didn’t matter. However, I can see the advantage of diminished card sizes at the five and six player count. Part of the fun of Boba Boss is the crash and bumps of flipping over another players cards. I'm sure durability of the cards will be an issue especially if you have an aversion to sleeving, since the cards get played hard and fast. 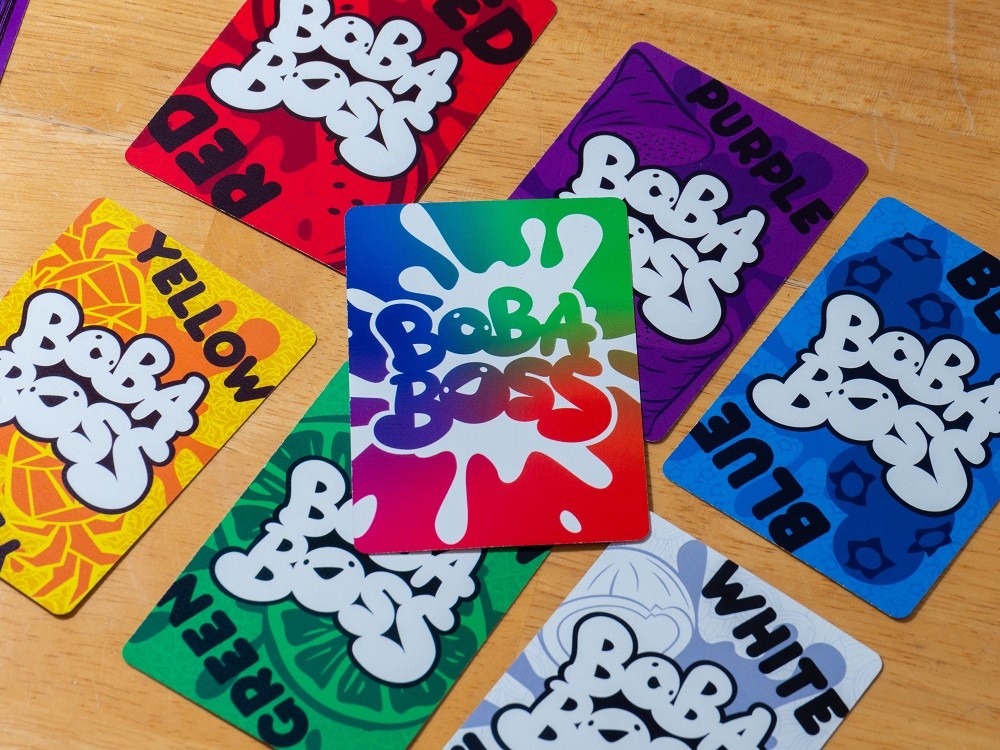 The box literally states the playing time as 1 to 3 minutes. Which is pretty dead on. What it doesn't mention is that you will likely be playing this 1.) standing up 2.) You are going to need a good sized table 3.)You will probably want to play with the cards pushed to the middle of the table instead of in a tableau directly in front of yourself for easy card access to all players 4.)Some of the card are going to require silly hijinks (like the Ice card which states you should spin around 3 times before playing your next card). Yes, we house ruled this particular card for playing while sitting down (we required the card be picked up and “swirled” three times before being replaced and continuing). So, the game might not be perfect for every situation but you can accommodate for that as you wish (and we did wish, because the game is thoroughly entertaining even when it borders on out of control).

A preview copy of this release was provided by the publisher. This may not represent the game in it's final form. A rating will be given when a 100% final copy is available for review. Therewillbe.games would like to thank the publisher for their support.

If you would like to follow the progress of Boba Boss, you can check out it out here: https://www.diabolical.games/boba-boss/

ubarose wrote: Boba Boss is a crazy, fun party game. It does require some energy and dexterity, so I expect it will be a late night, but not too late, convention game.

Guess I went with the wrong punk rock headline: Anarch-tea n the UK by the Sex Pistols instead of "Too Drunk to Flip" by the Dead Kennedys.

Jackwraith replied the topic: #305882 06 Jan 2020 22:38
I have never laughed harder in my life than the time I played that track by the Kennedys with my girlfriend's two kids in the house (aged 14 and 16 at the time) and she heard it. The expression on her face was a mixture of astonishment, horror, and something approaching bemusement.

MattFantastic replied the topic: #305948 08 Jan 2020 17:13
I've played this a bunch and it's awesome! The smaller cards have the huge advantage of you being able to hold the deck in your hand easily.
Read More...