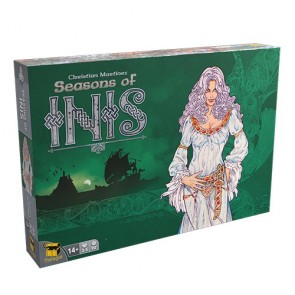 The Seasons of Inis expansion, as seems to be tradition with the Madagot Trilogy, is presented in modules, giving you the option of adding and removing portions of the expansion material as you see fit. Five total modules are included and I've broken them down by my order of preference:

1. Fifth Player/Clan Added. If you read my Best of 2019 article, this addition of the New Clan was exactly what I was looking for. It is my favorite color to play as (Black) and seamlessly adds a fifth player to the game. An extra player also means the inclusion of new Season Cards that are almost on par with the virtually perfect selection of Season Cards in the base game. The new cards are so good that I really miss them when I have to drop down to anything below a five player game and need to remove them. The addition of a 5th player doesn't upset the delicate balance found in the base game and, maybe just as importantly, doesn't add significantly to the play time. 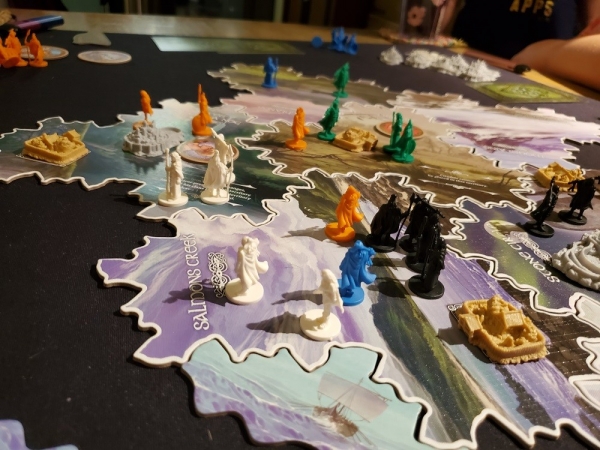 2. We Need a King. This one is an absolute requirement for a five-player game but should also be used at all other player counts. Occasionally, with the base game, the game time would stretch out if the players tied for the lead were not the Bren. With the addition of the 5th player, this is even more likely to happen. This addresses that issue, essentially putting a timer on the game once one of the objectives has been reached. I don't know if you can call it a full module (it's just one two-sided tile that you place on the table) but it is a rules adjustment that is welcome if you have ever have experienced one of the those seemingly never-ending games of Inis. 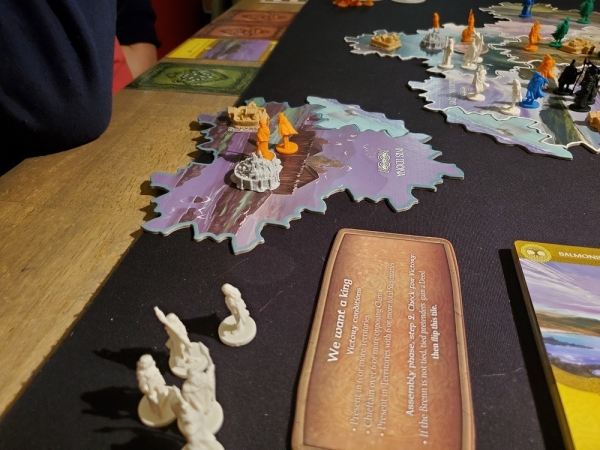 3. New Epic Tales cards. I discussed my love for Epic Tales cards in the Madagot article that me and Jackwraith wrote awhile back. More hand of god moments are a good thing and, of the 15 new cards that are added, only one is specific to the fourth module (Ports and Islands) and can be removed if you choose not to play with Module Four. They include the typical “You can do what now?!?” cards and a bevy of others that you can literally build a entire strategy around. Since they are shuffled into the starting deck of Epic Tale cards, it will take a few games before you see them all come out. None of the new cards stand out as overpowered (at least no more OP than those in the base game).

4. Harbors and Islands. I always joke (and will continue to joke until someone actually laughs at it), that Seasons of Inis adds the Obelisks from Kemet to Inis. What it does add is Ports. And the capital city always has a port added to it at the beginning of the game. This means it is accessible from any island or any other territory with a port with a single movement. Thus, it allows you to “teleport” (a.k.a. sail) from various areas around the map right onto the doorstep (seastep) of the capital city. Before, when a Bren held control of the capital, they were allowed to pick the placement of new territories and could choose to place all “newly discovered lands” far away from their stronghold if they weren't going to be the one holding sway over them. This helps mitigate that advantage. At the same time, and in direct contrast to what I just said about ports making areas more accessible, creating a Island Stronghold is now a temptation. Sure, if you math it out, Islands usually end up having just as many (if not more) points of access to them but there is just something so satisfying about building an Island fortress. Six new territories tiles are added (along with the advantage cards for controlling them) and they make great use of the new harbor rules. 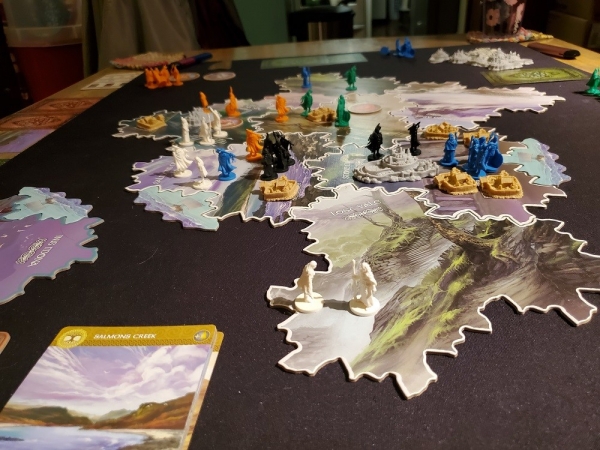 5. The final module is actually the one the expansion is named for: The Season mechanic. When using this module, there is an additional step in the Assembly Phase and both Summer and Winter add a different rule/modifier to the game every “season”. This is the module that I rarely use because I don't feel that the randomness it adds is needed (or worth the effort of keeping track of.) It can make it easier for a player to recover from a misstep early in the game but the “A different rule is added or subtracted every round” is just a layer that Inis doesn't need and I feel it interferes with the fluid flow of the game. Maybe someday I will think that Inis needs this to mix things up but I haven't reached that point yet.

Since the Seasons of Inis expansion adds five modules of which I will always use four of (when applicable a.k.a. A Five Player Game), the rating is pretty much a forgone conclusion. As with most sleek expansions, I wouldn't hesitate to add everything but the Seasons Module to even an introduction game. If you have EVER not been able to play Inis because of the four player limitation (which has happened to me on more than one occasion), you know why I picked this expansion up. I wouldn't say everything else is gravy but that is the meat of the reason of why I purchased it. As with most of the expansions for the Madagot trilogy, it is a bit on the pricey side (MRSP is $49.99 U.S.) but I feel it was well worth it.

January 04, 2020
Rating
4.0
Inis: Seasons of Inis
Since the Seasons of Inis expansion adds five modules of which I will always use four of (when applicable a.k.a. A Five Player Game), the rating is pretty much a forgone conclusion. As with most sleek expansions, I wouldn't hesitate to add everything but the Seasons Module to even an introduction game. If you have EVER not been able to play Inis because of the four player limitation (which has happened to me on more than one occasion), you know why I picked this expansion up. I wouldn't say everything else is gravy but that is the meat of the reason of why I purchased it. As with most of the expansions for the Madagot trilogy, it is a bit on the pricey side (MRSP is $49.99 U.S.) but I feel it was well worth it.
W
WadeMonnig Top 10 Reviewer 195 reviews

Jackwraith replied the topic: #306854 05 Feb 2020 08:20
Yep. Pretty much duplicates my thoughts on it. I've run into a few "Inis resisters" recently, who avoid it for precisely the reason that the We Need a King module addresses. I'm rarely able to convince people that the "neverending game" problem doesn't happen that often. With something to directly address it, I've been able to convince a couple of them to come back.

The fact you can port the new win condition change to the base game with no components has lead me to not picking this up. Probably will at some point for the extra cards, but content playing my buddy's copy until then.

Ah_Pook replied the topic: #306858 05 Feb 2020 10:07
I'd love to try Inis again but it was so hit or miss with the people that I got to play it that eventually I sold it. People liked to call it Munchkin With A Board, ie when someone threatens to win everyone smacks them down rinse repeat until people run out of cards and someone eventually wins by attrition (well after everyone has stopped having fun). I think there's plenty of room for clever play and the good games will outweigh the bad ones, but it's hard to get people to push through bad experiences with a game like this and keep playing. Sounds like the win condition modification would help a lot, but the ship sailed a long time ago for me. Plus I didn't have a dedicated 2p opponent who was into it. I think Inis is best 2p honestly.

WadeMonnig replied the topic: #306864 05 Feb 2020 12:52
I can see the "Munchkin with a board" comparison but, honestly, isn't that something that can be said about just about almost every competitive DOAM game? I've heard that levied at Kemet, Cthulhu Wars, Etc... I guess the fact that you have Epic Tale card makes it more of an easier comparison.
I'm one of the lucky people who has never really had that "Bad" game of Inis. It has always gone over extremely well.

Shellhead replied the topic: #306865 05 Feb 2020 13:06
Usually geography is enough of a factor in a DOAM game that the whole table can't easily turn against the leader, just players with adjacency on the board.
Read More...